Not every Monday is the same but all in all they are pretty similar especially now that school has started.

This morning my prayers were not answered. Usually they are though so I won’t complain. Usually Tim starts their breakfast and turns on cartoons for them but today is today and not last Monday so here it goes.

At 7:15 I grab Elise out of her crib and can’t help but smile even though I am exhausted and still fighting off bronchitis. She is so purely happy, joyful even just because I opened the door and walked into her room. Talk about an ego boost. That little ball of cuddly perfection loves me. She squeals with joy when I pick her up  and walk her over to the blinds because it is her job to pull the cord and let the sunshine in. She loves this.

We walk downstairs and the boys are playing quietly on the wheat field (that’s what the boys have named our wheat colored shag rug) and as soon as they see me they start in on their request for breakfast.

I change Elise’s diaper (which is a whole story in its self. She wrestles you through the entire process. every. single. diaper.) and put her into her high chair and dump some Cheerios on it to passify her until the boys have been fed. I don’t blame her for being hungry because by this point it has been 15 hours since she has had super. She attacks the Cheerios like it is her job. Like it is her responsibility (more on this later- for now only Tim & Beth will laugh!) to eat and eat and eat until every crumb in gone. 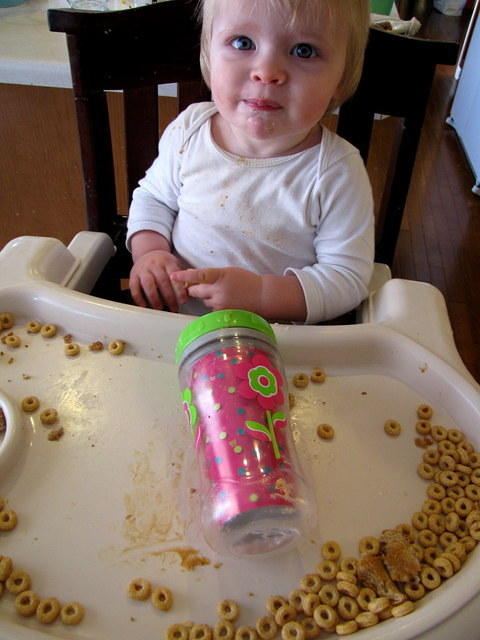 The boys feel no responsibility to finish their breakfast. They see breakfast as a leisure activity. I am sure this is because cartoons are on and whatever Wild Kratts are doing with some obscure wild animal is way more exciting than the food they were shouting about minutes before. 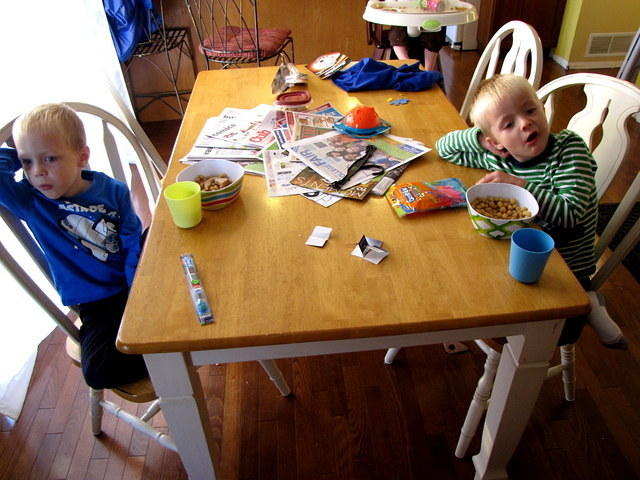 The kids eat like this until their food is gone or until they are inspired to play something. This goes for Elise too. She will sit in that highchair for 45 minutes to finish all her Cheerios. This is how we all ease into the day.

At this point I am making Patrick’s lunch because I was a bum last night and refused to plan for this morning knowing that in the morning I would curse myself for the laziness from the previous night. I pack a lunch and stick into the fridge. 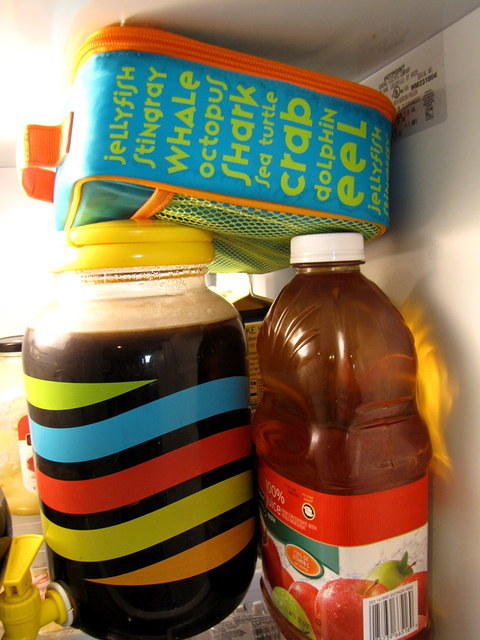 I pour myself a coffee and sit down at the computer and try and throw together a post for the day. You know it is a busy morning for us if there isn’t a post out before school drop off.

At 8:40 I stop typing because, I only have 10 minutes before load up time and the boys have no shoes on, I haven’t made snack for Patrick and I still haven’t gave the boys their vitamins yet.

I go to the vitamin cabinet and curse because just last night I bought a new bottle and the ridiculous amount of wrapping takes me way longer than it should to open the bottle and then there is still the safety seal. I stab it with scissors all the while narrating to Michael because he is standing there waiting for his “Gummy” and asking me about every step of the process, “Why is there a wrapper? Why is there another wrapper? Why did you use scissors?” I get it open and there is a sample of their new sour vitamin. I can’t resist giving it to Michael and think that his funny face would be my revenge to all his questions. So of course I got get the camera, which surprisingly I know exactly where it is, and I get ready to snap away. I debate between video or photo and decide on photo. I hand him the sour gummy and 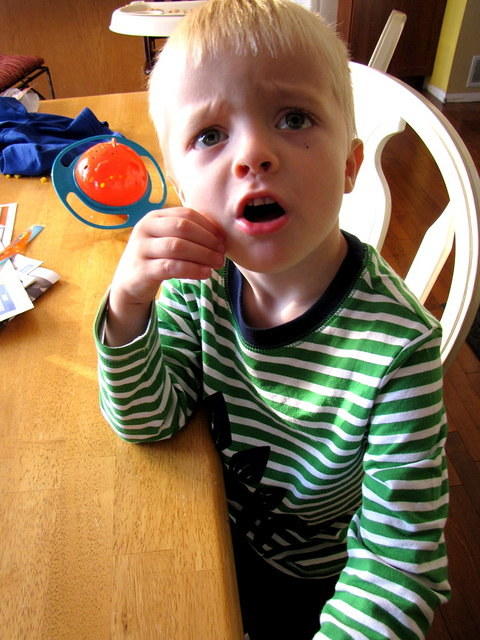 He thought it tasted good. He wants another. then he starts asking why he can’t have another one like that instead of a normal one. That backfired. After multiple attempts to explain what a sample is I gave in and gave the blanket statement all moms use, “Because I said so.”

I quick grab a kid Cliff bar and some raisins and toss them into a tuperware that already has Patrick’s name Sharpied onto it because all my tupperware has one of the boys’ named Sharpied onto it.

I shoe Patrick because it is late and it isn’t worth the effort of forcing him to put his shoes on himself and I send him out. I bark orders at Michael to find and put on his shoes and then load up. He usually complies. Not today. I strap Elise and Patrick in and wait for Michael. I open the door and shout at him to hurry up and he scrambles out the door shoeless but holding his shoes. Whatever. I snap him in and start the inevitable last minute scramble. It usually takes at least 3 trips back into the house to get things I forgot. Usually my own stuff, cell, wallet, Y ID, sun glasses etc. Today I was halfway down the driveway and I realized that the forgetful feeling that always nags me at this point is justified. It is justified because I am just now registering that when I put Patrick’s lunch box into his backpack I saw goggles. Today is Monday. Swim Day. I forgot Patrick’s swim bag. Not only did I forget to load it, I haven’t packed it yet.

I quick flip on the car DVD player and head back inside. Again.

I run down to the laundry room where is the last place I remember seeing his trunks and rash gaurd. They are on top of the clean pile. Stroke of pure luck. I shove them into his swim bag and run back out to the car.

We pull out of the driveway at 9:01 6 minutes behind schedule.

I leave Michael and Elise in the car because Michael still doesn’t have shoes on and I feel better abandoning them in pairs and logically the sign in process would take longer with Elise on my hip so if I leave her too then I will be back to Michael faster.

See how easily I can justify bad behavior. Some things never change Mom!

On the walk into school Patrick trips over nothing and biffs it. When I crouch down to see if he is okay, normally he pops right back up- this time it is taking a bit longer, Patrick looks up at me with excited eyes and thrusts his cupped empty hands into my face and says, “I found rubys!”

I laugh and tell him how beautiful they are and watch as he sprints inside. He is bursting to show someone but manages to dump off his backpack into his cubby before running up to a teacher to show her his treasure. I love her for being just as excited as he is and I take a moment to chastise myself for not giving that specific teacher more credit. She may be reserved with the adults but she is great with the kids.

I stay and watch as he crouches down to hand a very disinterested boy half listen to Patrick as he tries to share his rubys with him. I go to sign him in and put his snack in the snack box. As I seek Patrick out to say goodbye I see him with his new best friend. He and his new BFF are handing imaginary rubys back and forth. The new best friend excitedly shouts about how shiny his is and Patrick is just as giddy. I love Patrick’s new best friend. The old best friend wasn’t good enough for Patrick anyway. I don’t spend any more time watching all this, even though I want to be a fly on the wall and spend the rest of the school day watching Patrick share is rubys. I have to get back out to the car where a shoeless Michael and a sleepy Elise wait.

I wish I could say I spend the 15 minute drive home doing something educational with the Michael and/or singing songs with Elise but today we had more pressing matters. Today Michael was too busy planning the snack he wanted to eat when we got home. Just as we were watching for the Cottage Grove sign with “hard eyes” Michael asked me, “Mom do you have a button in the van that turns it into something else like a pusher or dozer or something? I laughed and took a moment to Thank God and Tim. God gave me these special and incredibly unique kids and Tim works his ass off so I can be home with them all day long. Sometimes this is a blessing in disguise and I have to work hard to appreciate it but when one is sharing rubys with his best friend and another is asking if our van is a transformer and yet another is chatting it up with her dolly the blessing is pretty clear to see.

We get home and I put Elise down and give Michael his snack.

It is only 9:50 am and one is at school, one is asleep and the third is snacking. Ask me again at 2:30 and I may have a different story to tell, but for now, the blessing is ruby clear. I love being a stay at home mom.

3 thoughts on “A week in the life- Monday”