Not exactly sure why, but when Elise and I went down stairs on day three this is what we found.

Even though I didn’t get to hit up the HUGE farmers market full of fresh fruit and hand made goodies and crafts on day two, I was able to convince Tim to pull over to the side of the road and hit up a fruit stand.

Elise and I sliced up the bounty from the fruit stand for breakfast. Did you know Papayas that are ready to eat are yellow on the outside? Oh and fruit tastes completely different here than it does in the mid west. YUM! 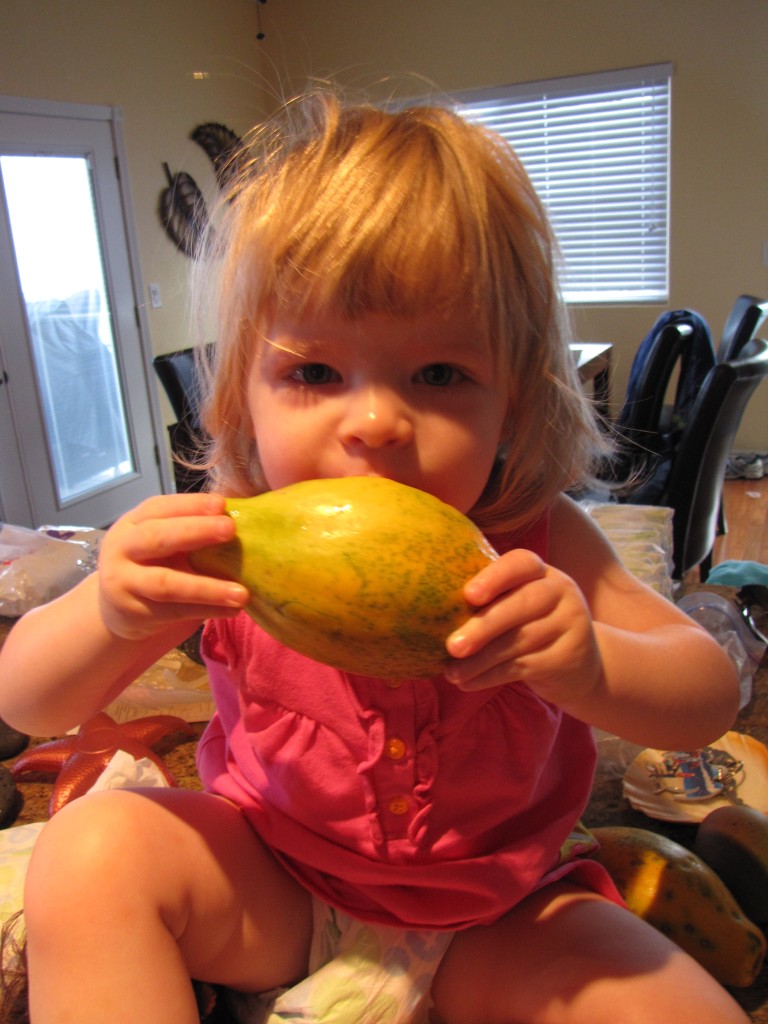 And limes (LIMES?!) can be orange! ORANGE! 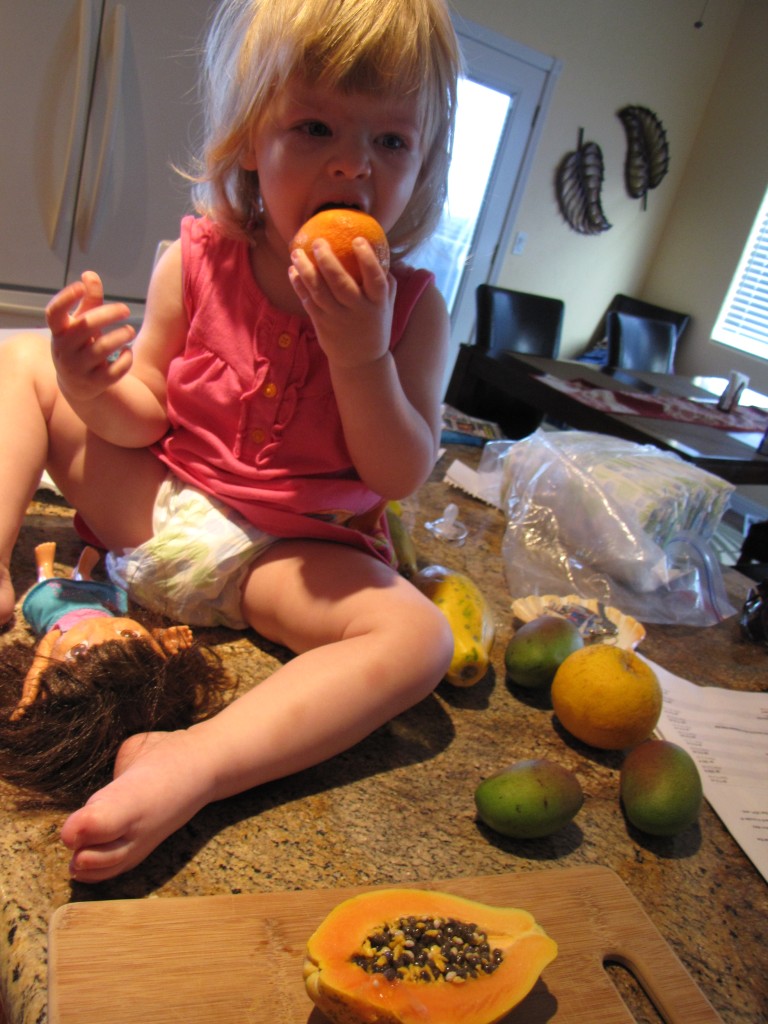 After another big breakfast we loaded up the van with heavy snacks, lots of water, changes of clothes and chocolate (last thing we wanted was another blood sugar drop!) and set the navigation system for Hawaii Volcanoes National Park!

The van ride was just under two hours of breathtaking views. 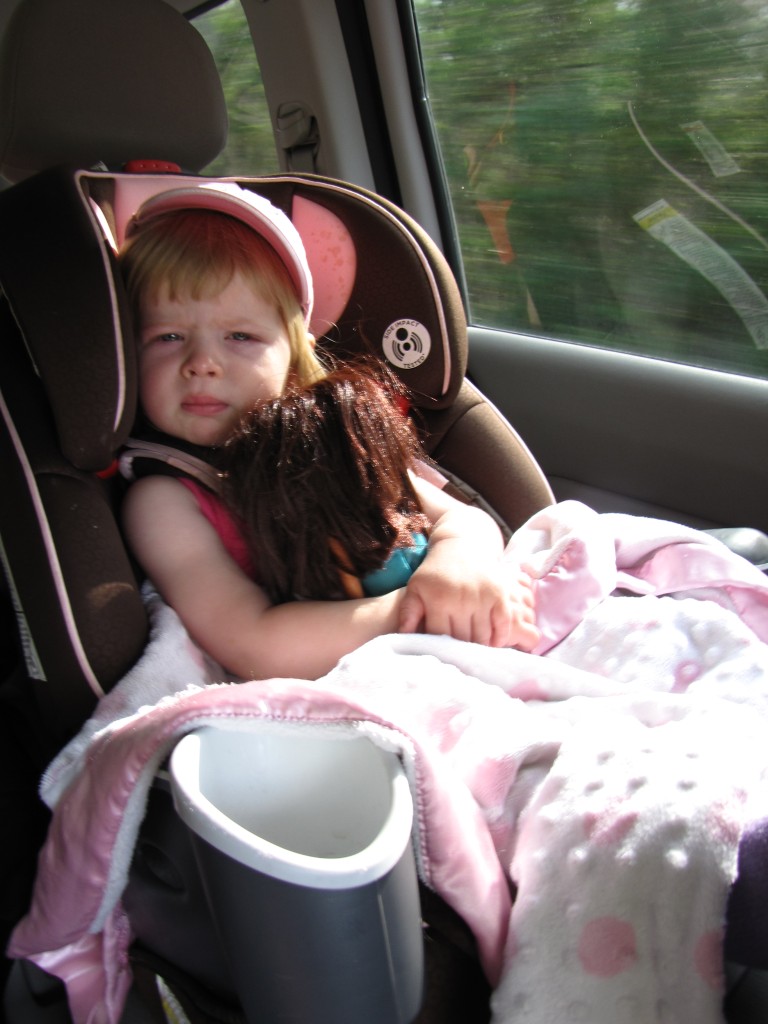 This one is slightly more beautiful. 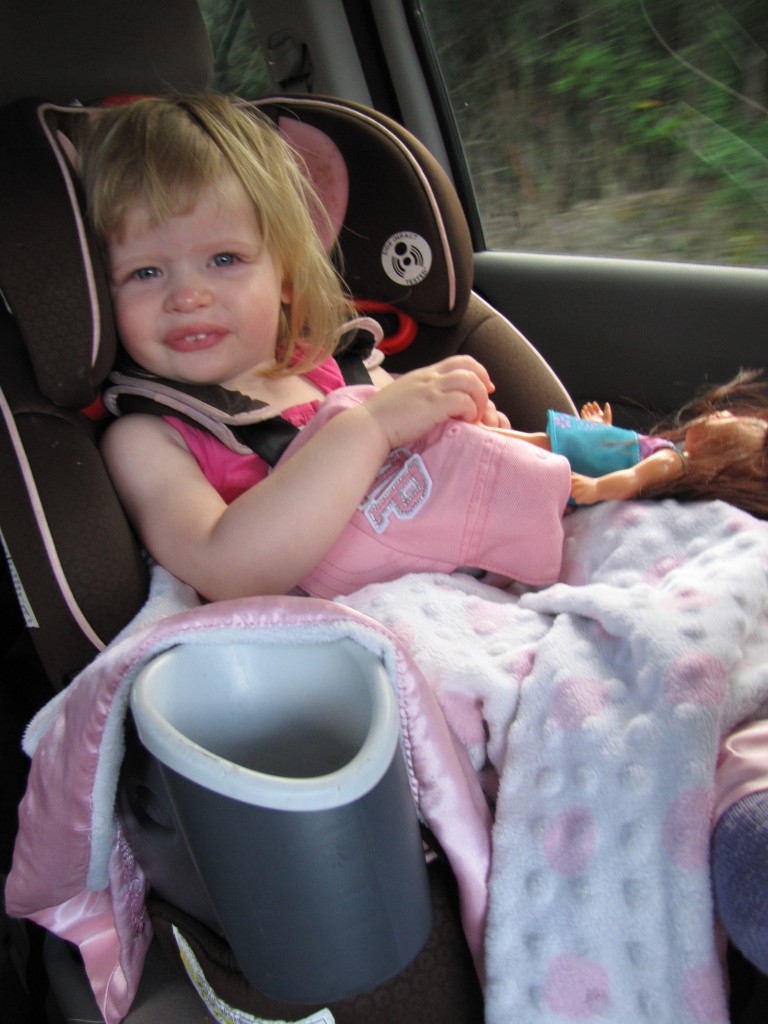 And some handsome gadget busy boys 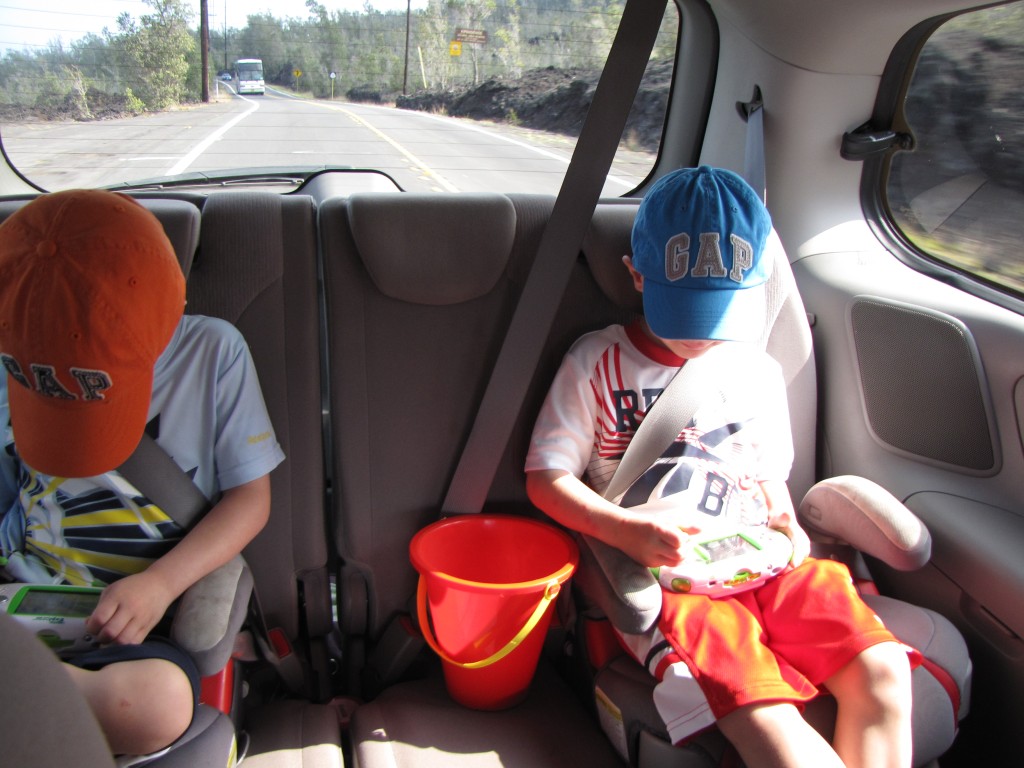 At the park we saw craters and steam. 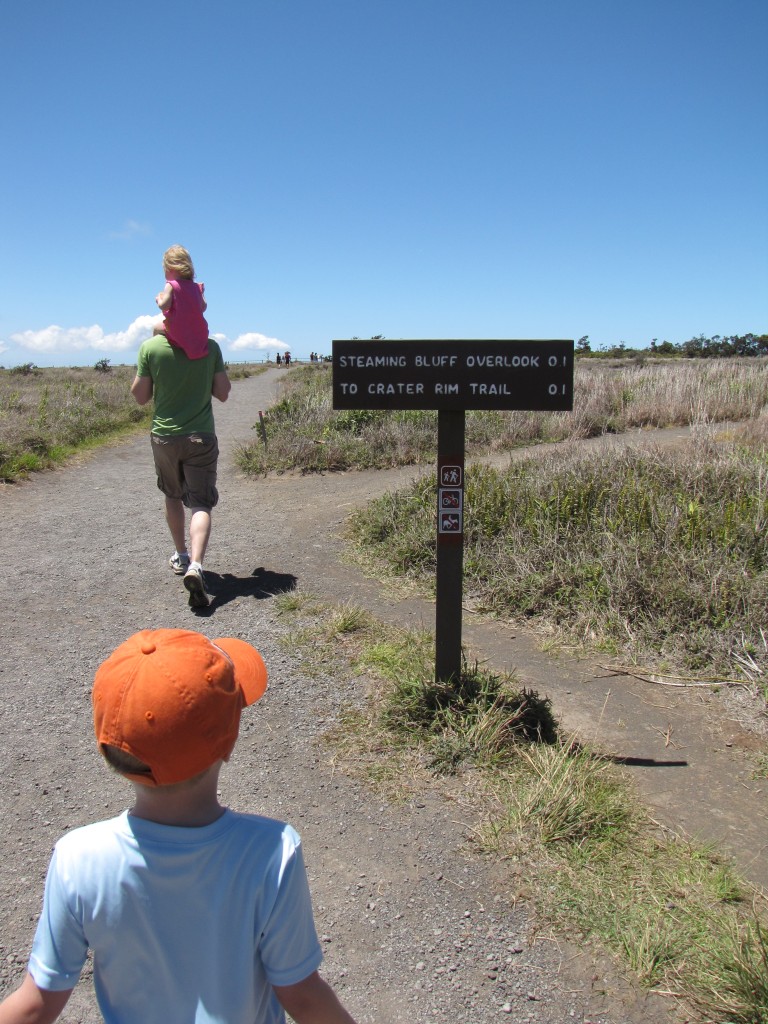 (written by Tim while Meg puts on her swimsuit) The pictures don’t do the immense scale of the caldera justice.  The whole caldera is actually the ridge at the right of the image below, which used to be a mountain before the churning magma underneath it caused the whole volcano to collapse.  The actual molten lava was about 400 ft beneath the ridge where you see the steam coming up, which you normally wouldn’t see, except for the fact this volcano has been in an active eruption since 2008! 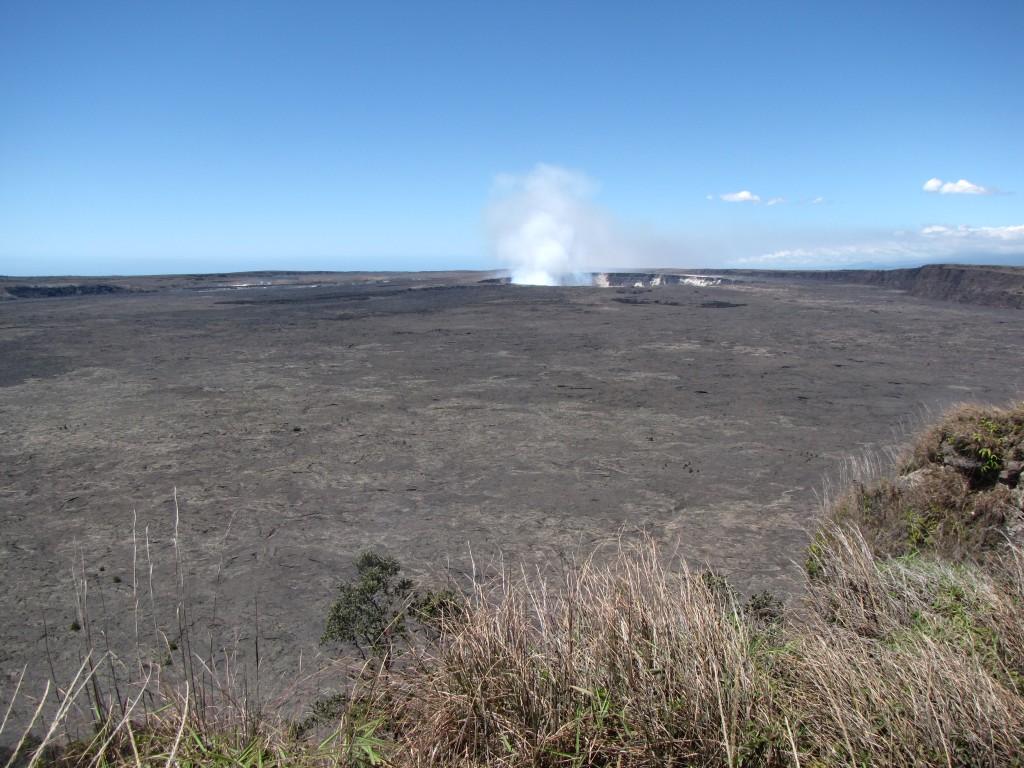 Here is a photo of the caldera from another angle with a trio of kids blocking the view. 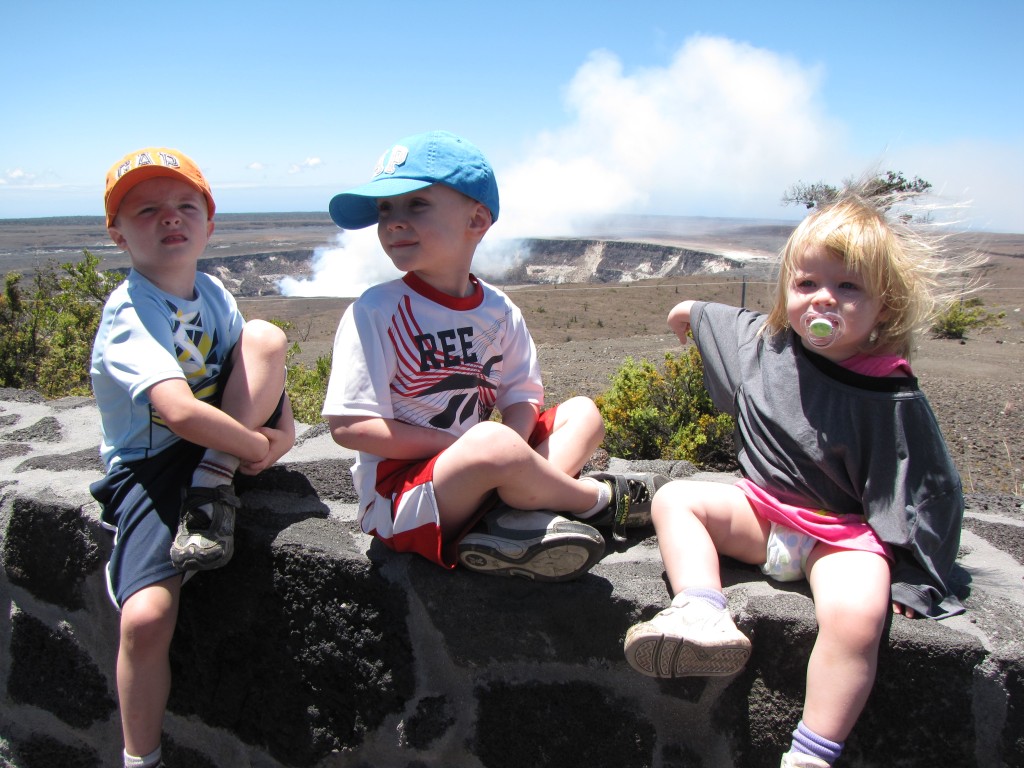 Michael soaked up volcano info like a sponge because of his souvenir book we bought him. Want to know something about a volcano? Ask Michael. 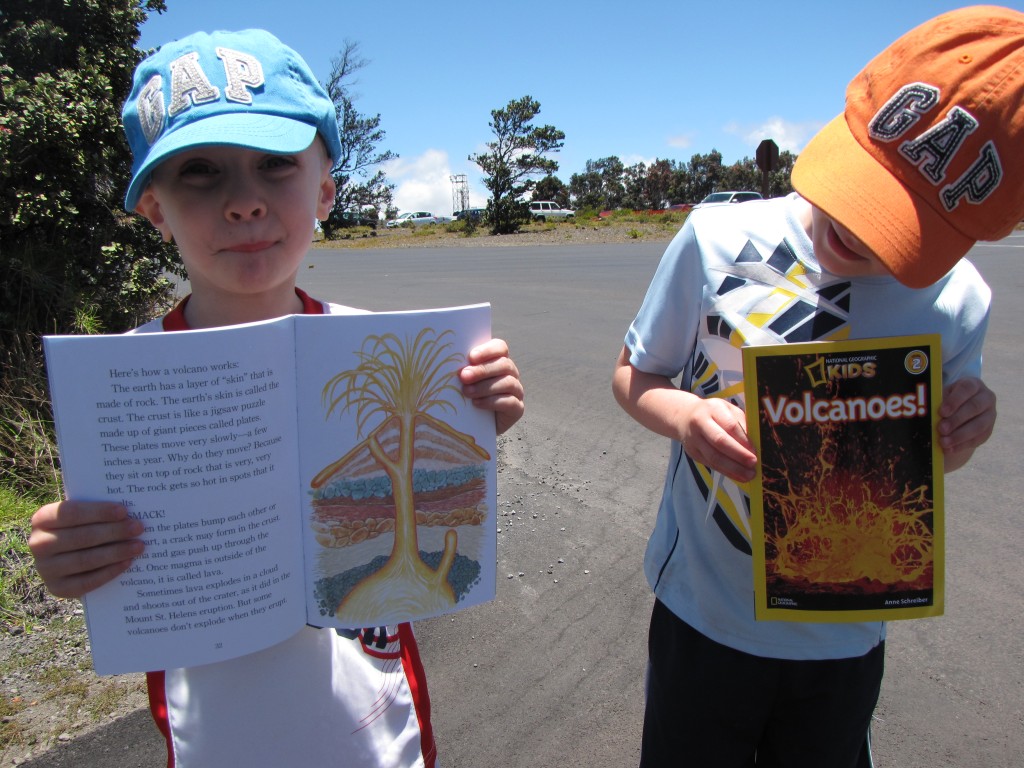 Elise got chilled from all the wind and Beth was kind enough to share her t-shirt. The one thing I didn’t pack for our volcano excursion was warm clothes. Sweatshirts would have been welcomed by all. 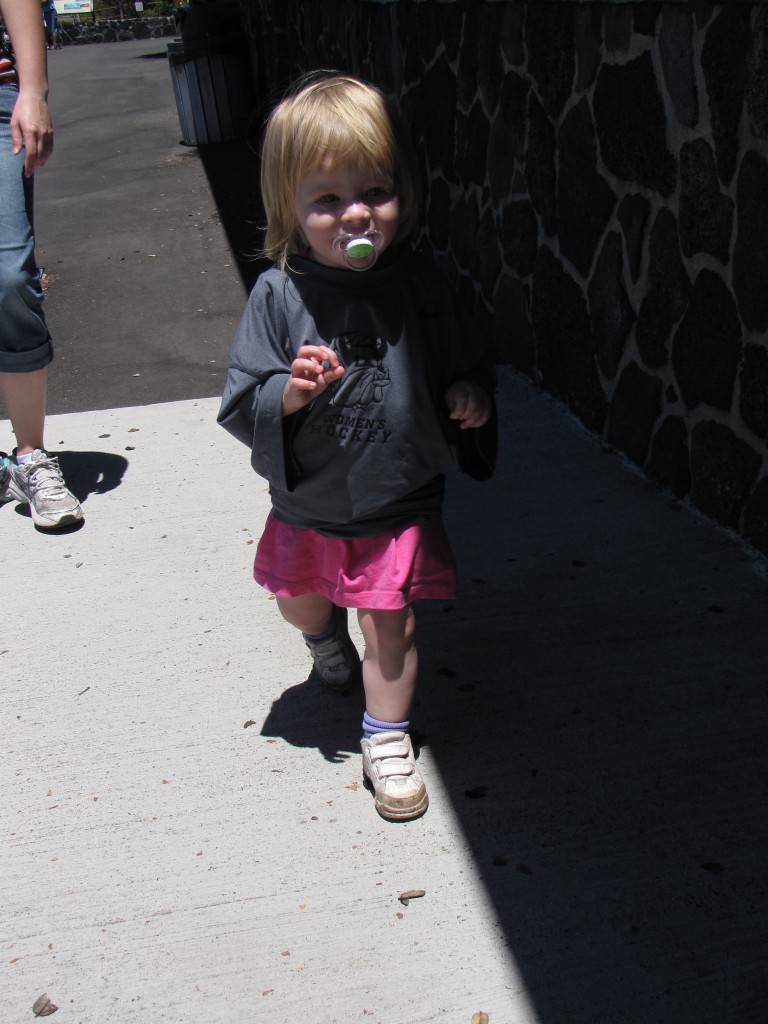 Patrick checking out the lava rocks and Michael learning all about goddess Pele. 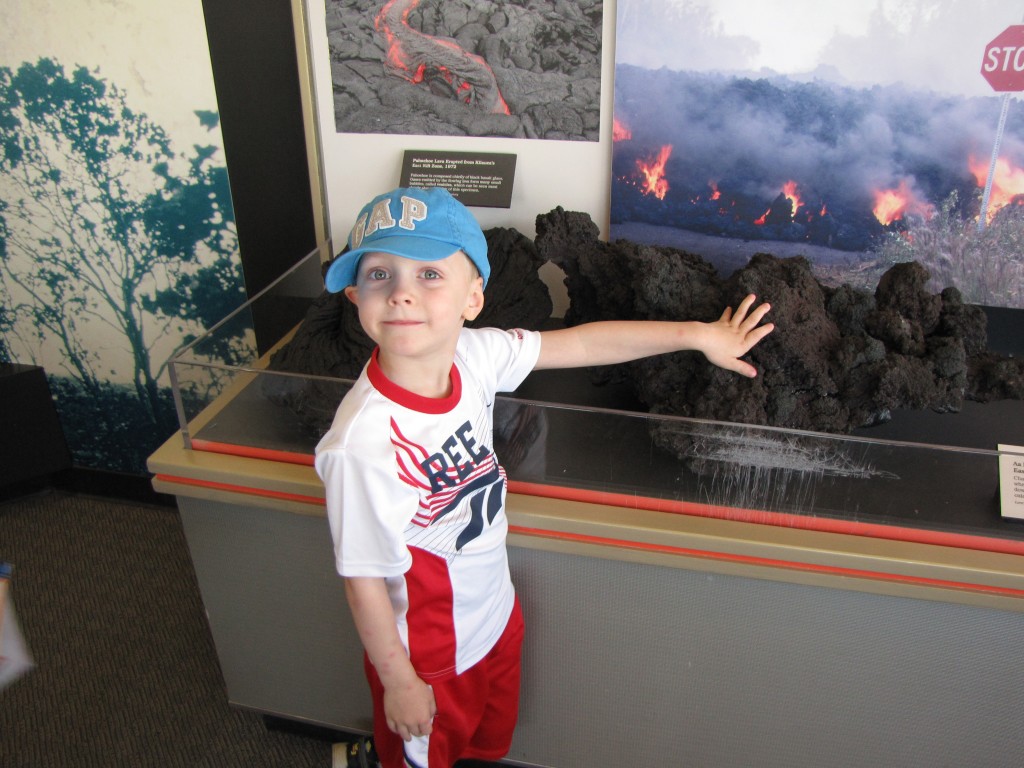 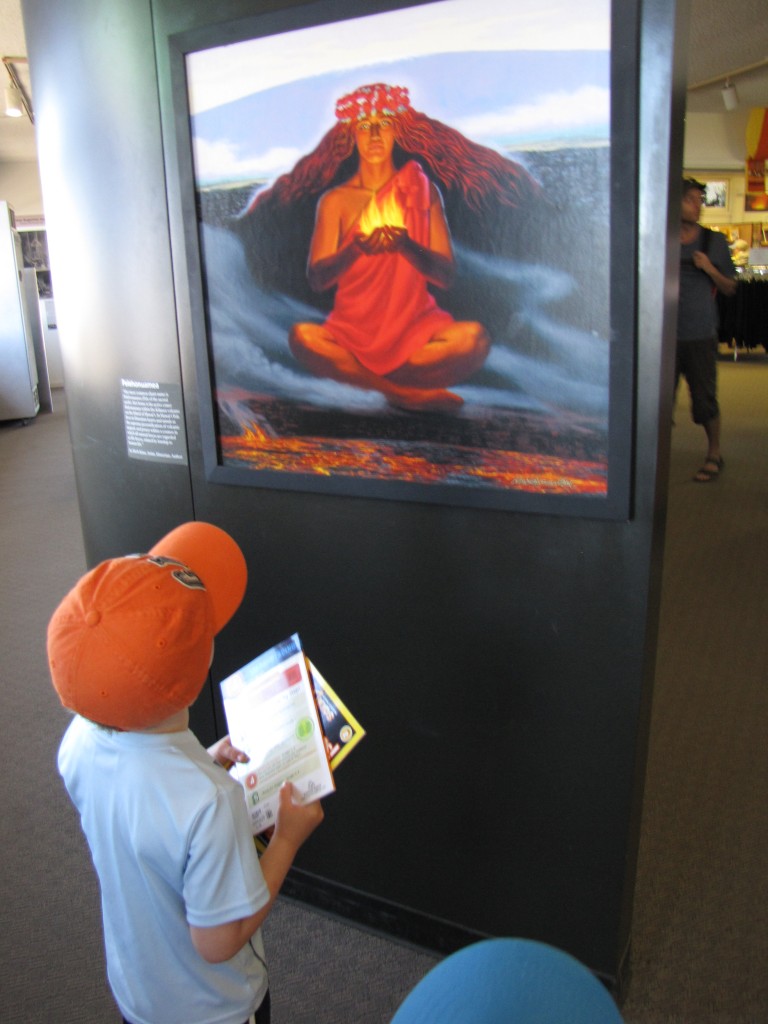 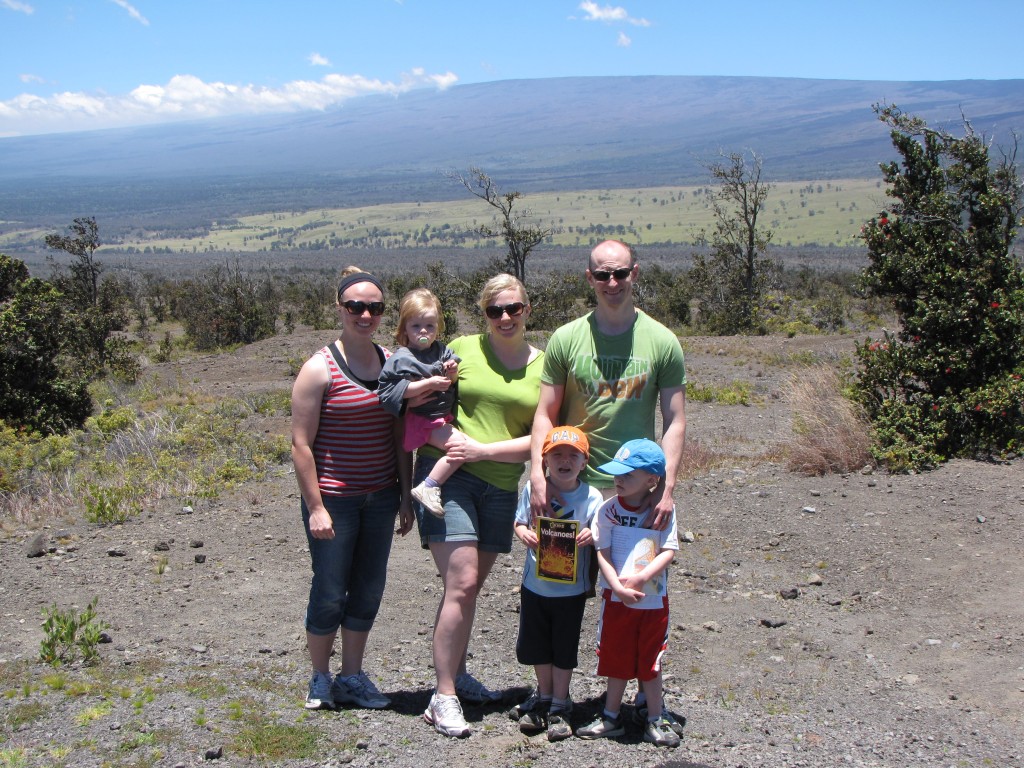 Just a few minute drive down the volcano road led us to the rainforest side of the volcano. It is insane how quickly the biomes change in Hawaii. 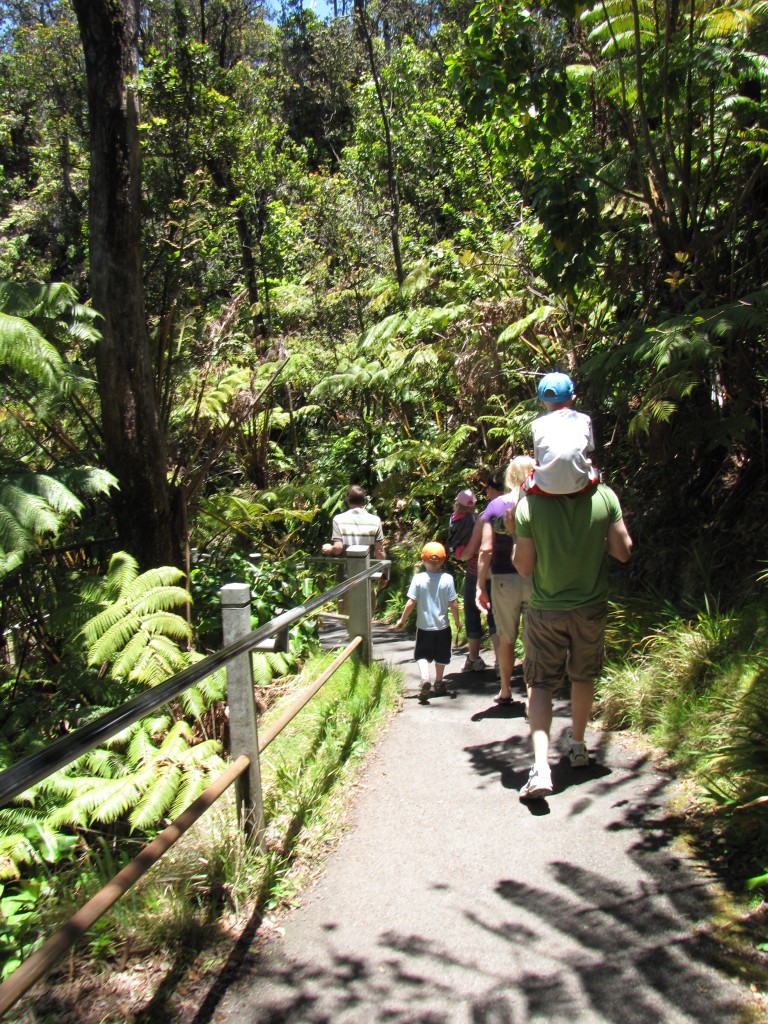 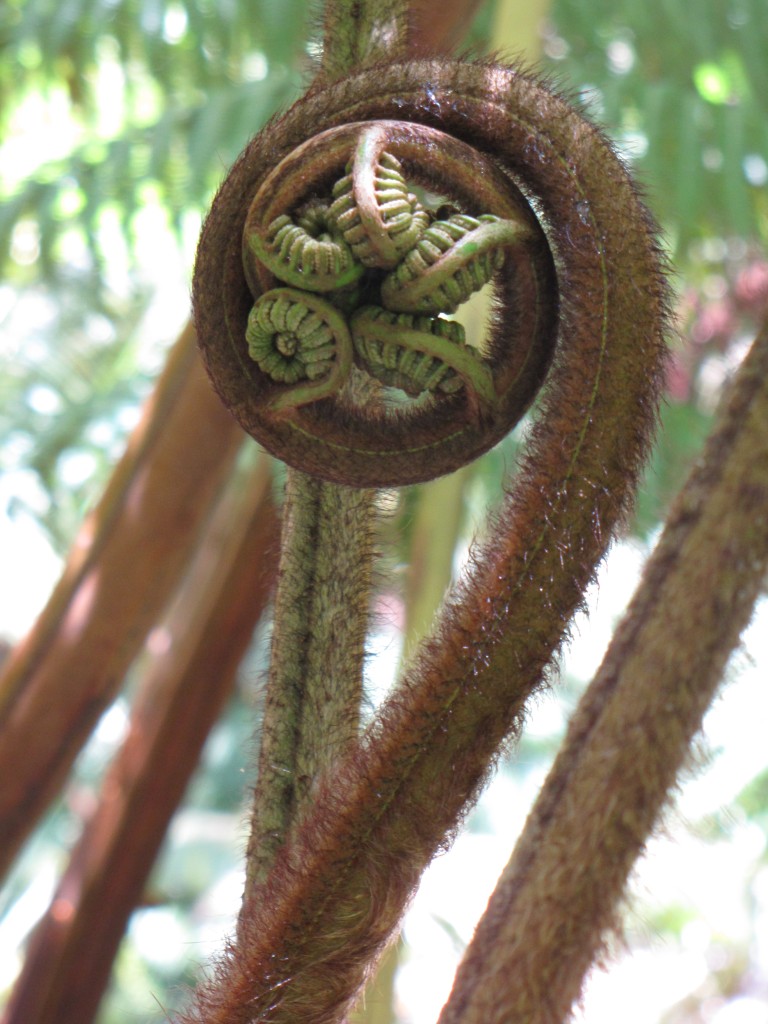 In the rainforest there was a lava tube that we could walk through. It is a tube made by, you guessed it, lava! The boys (especially Patrick) loved walking through the lava tunnel. 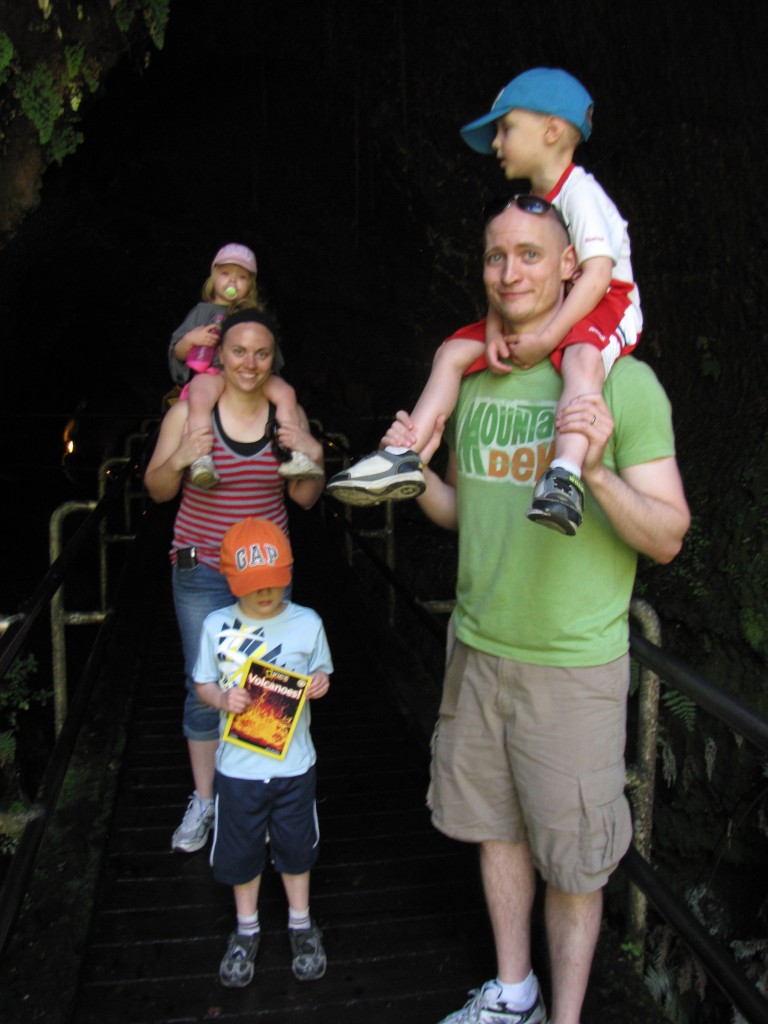 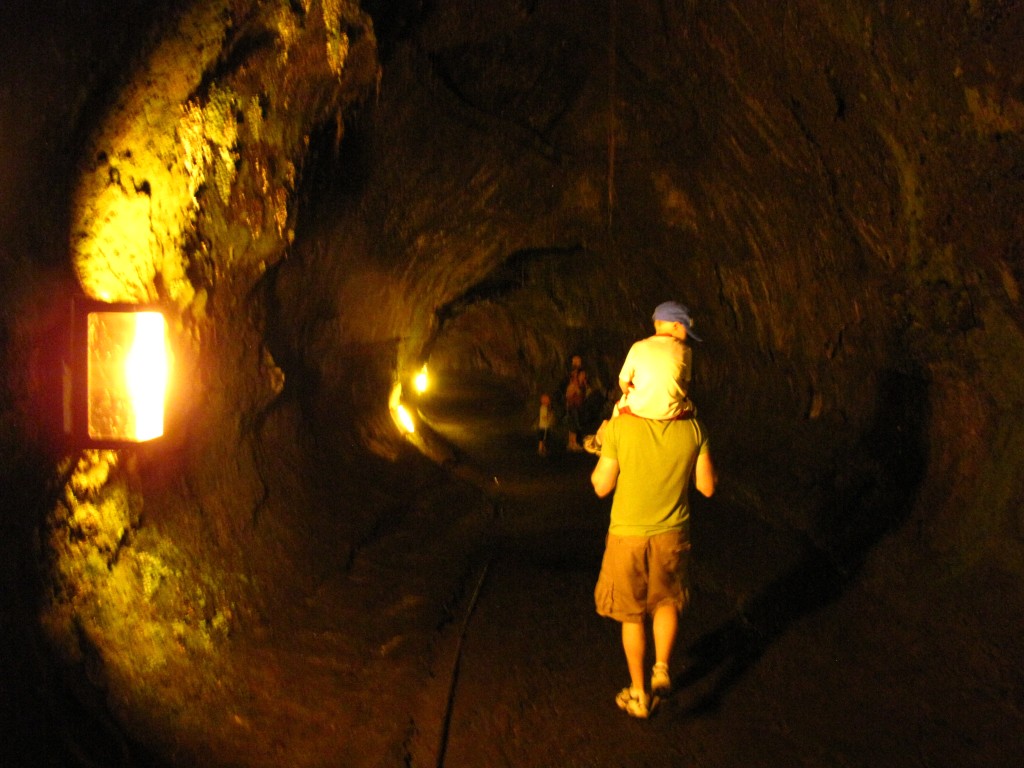 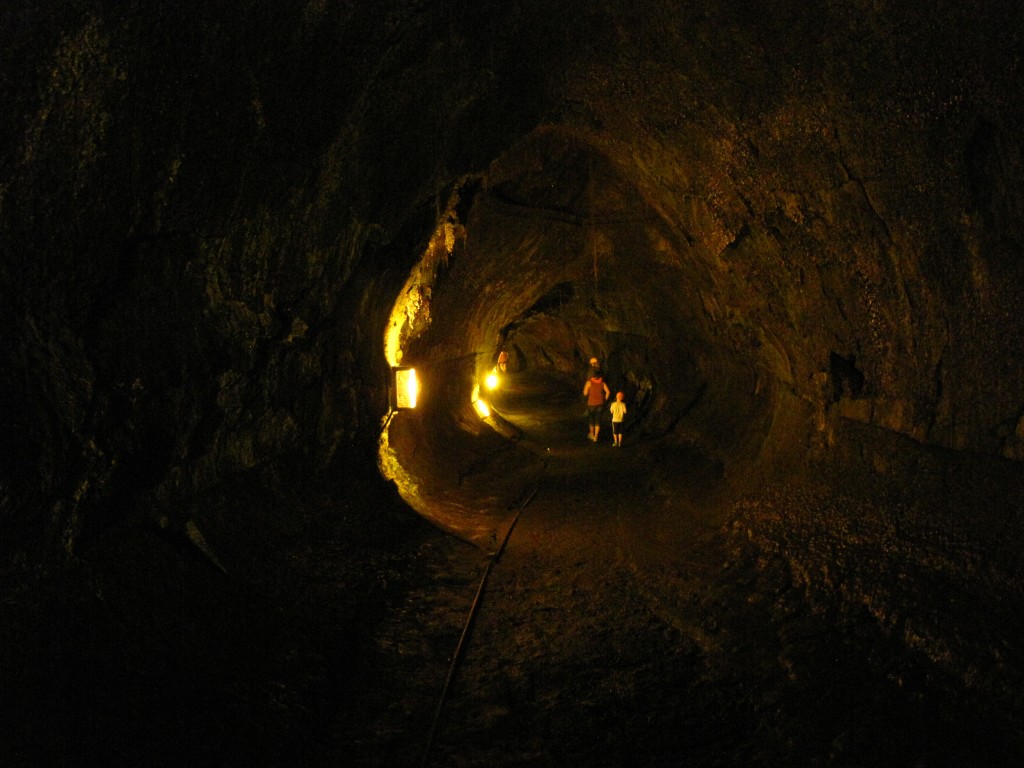 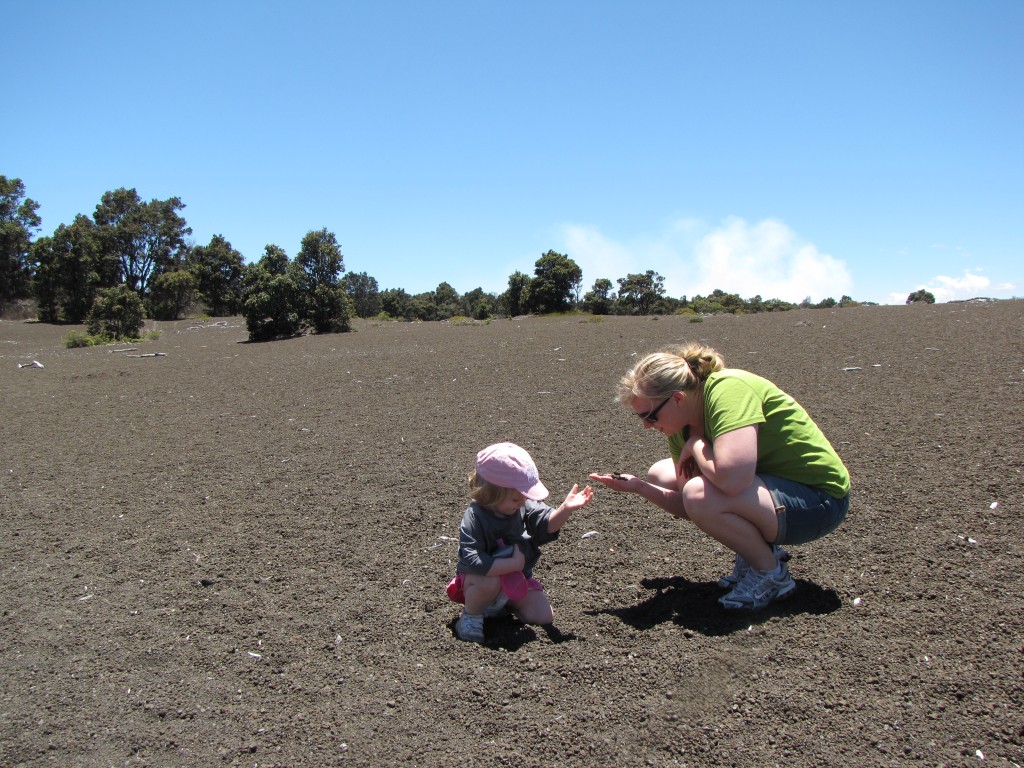 the rocks were shiny and quite pretty. It looked like they had little gold flecks and other little flecks of gems in them. 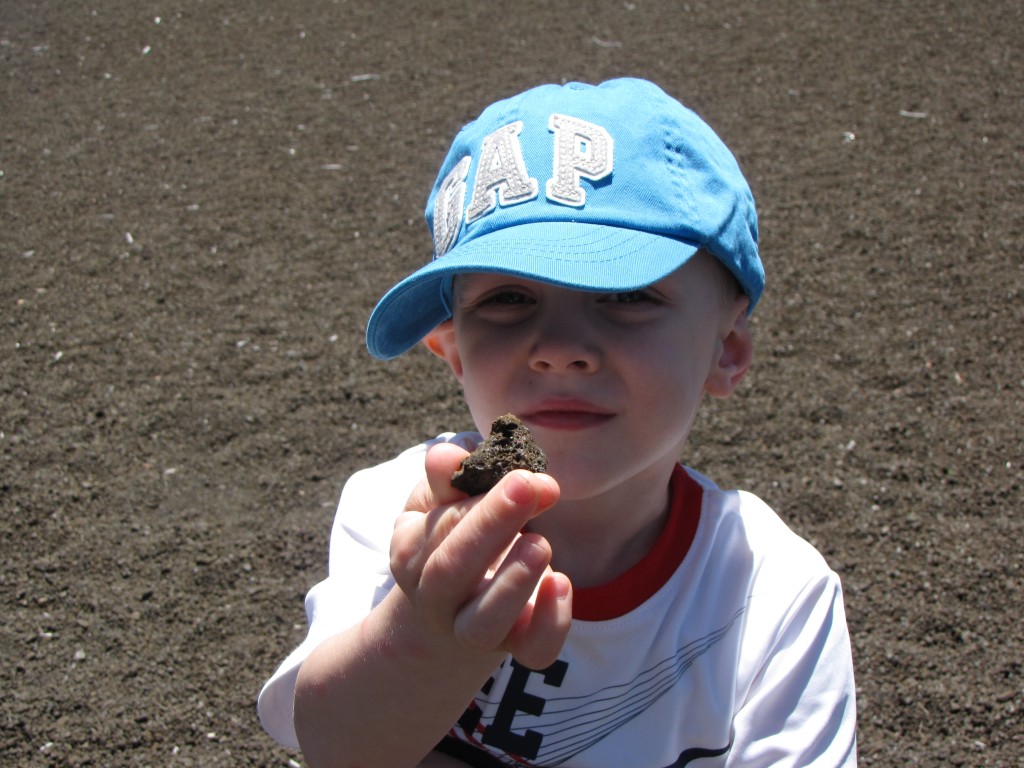 The devastation trail was the last we were able to squeeze out of the kids on just snacks in their bellies. They needed real food so we headed out of the park and got some food. While at the restaurant Elise made it very clear she was not up for a waterfall hike so we split up from the friends we were touring volcanoes with and headed home. It was the right choice but a bit of a let down that we were going to miss out on the Rainbow Falls.

Fortunate for us, the drive home wasn’t too shabby so we don’t feel to bummed, we are in Hawaii after all! 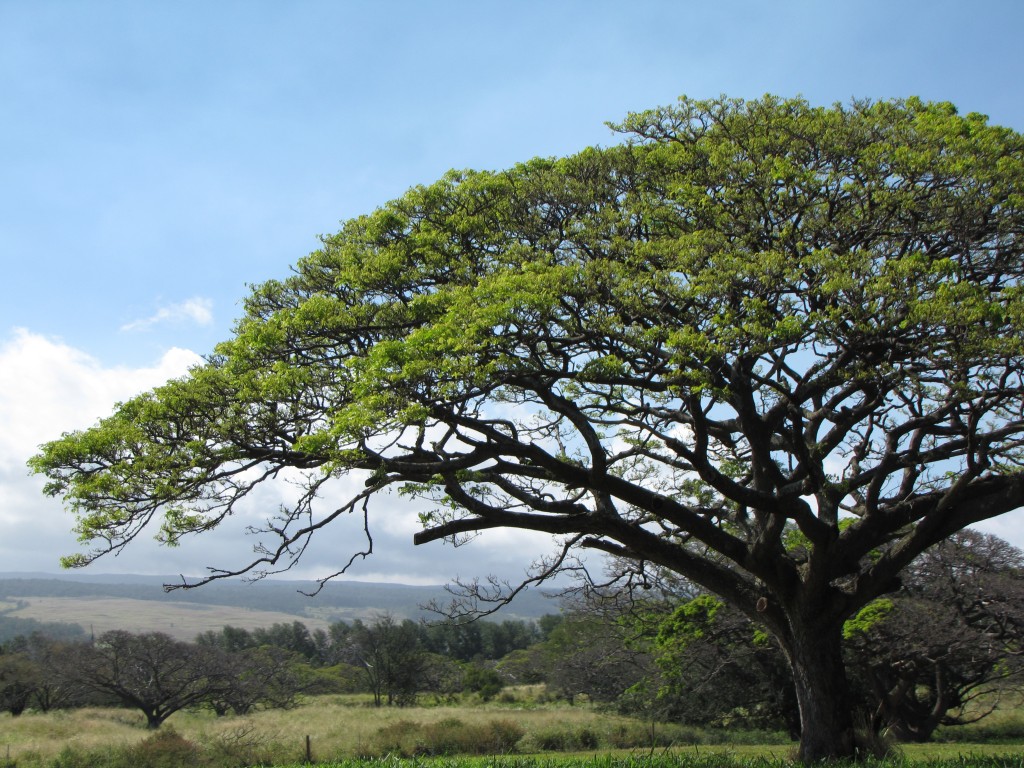 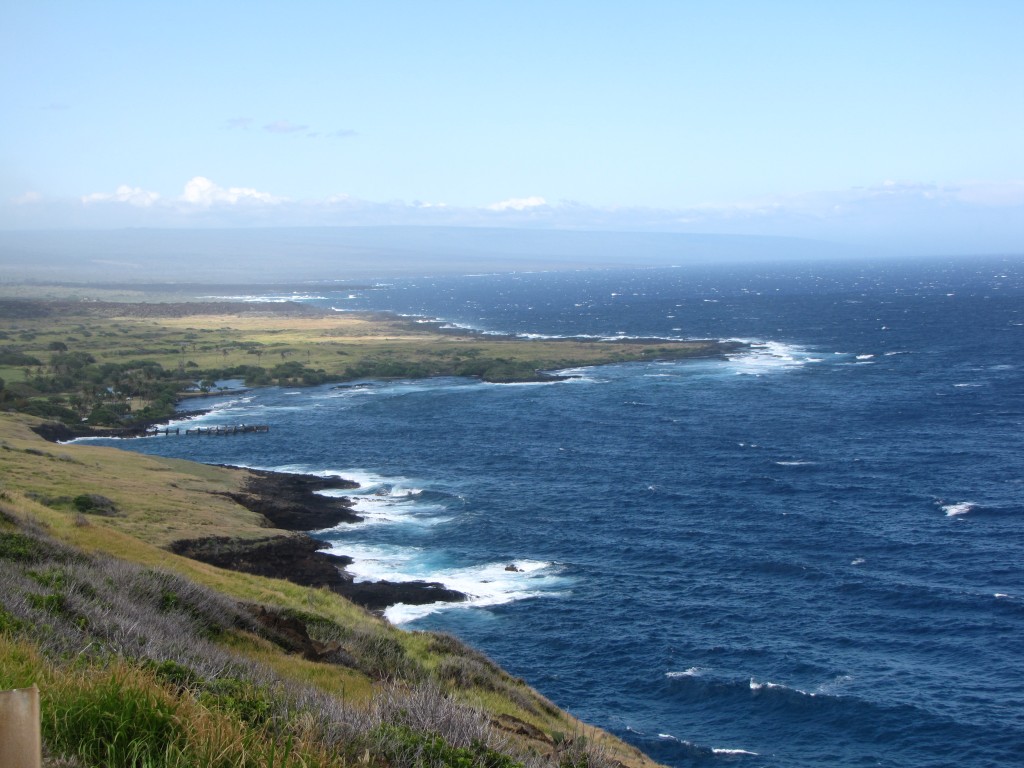 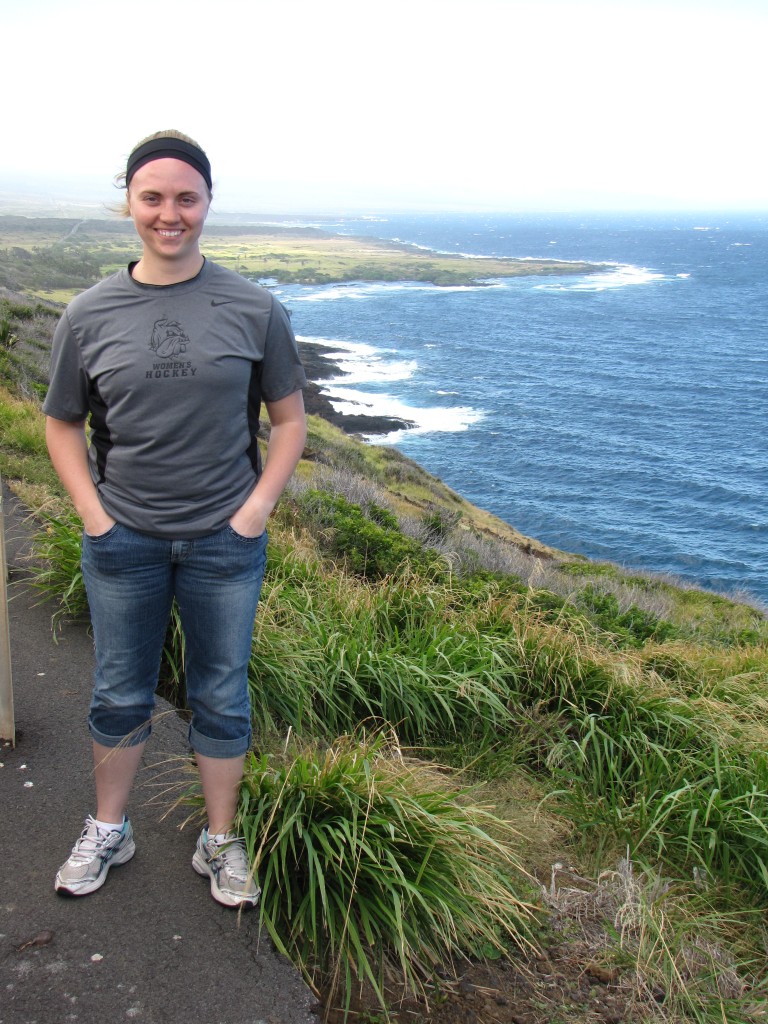 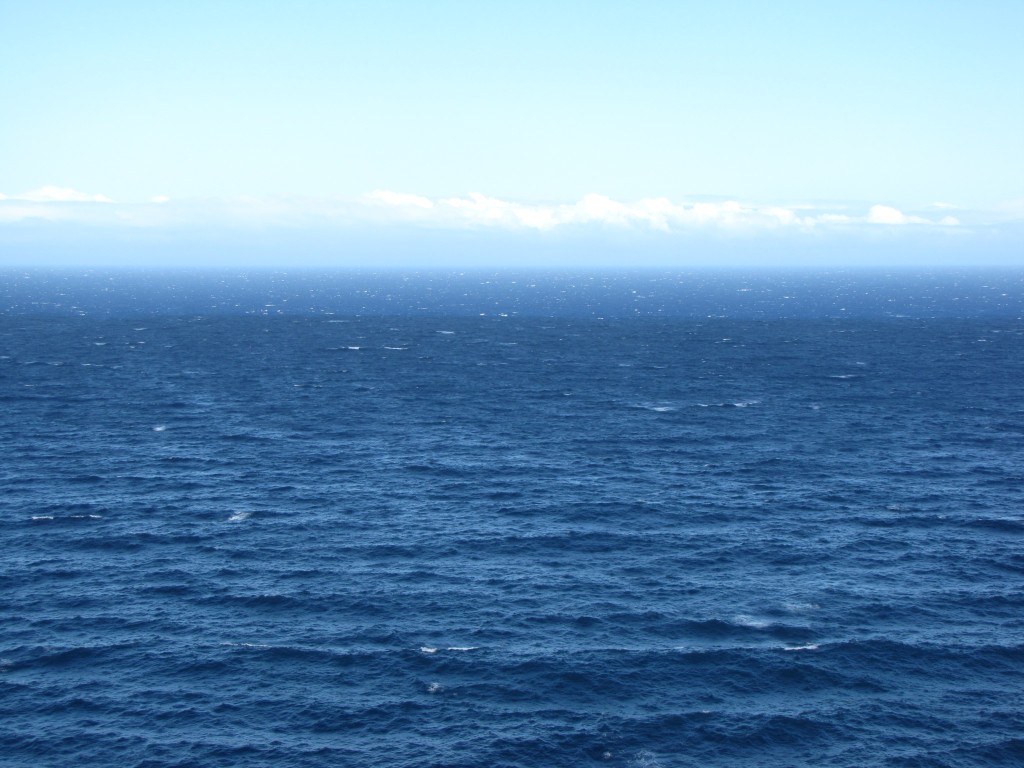 and just around the corner from the green grass and cliff sides, was a lava devastated area. 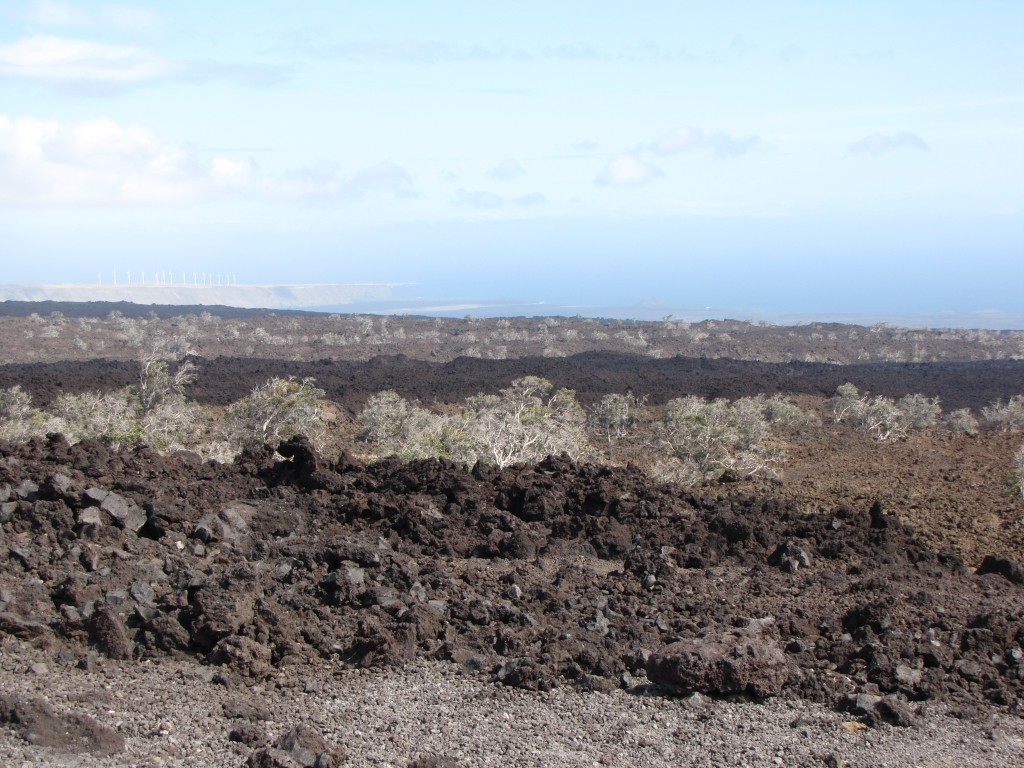 We even found a little Episcopal Church on the way back; St. Judes. 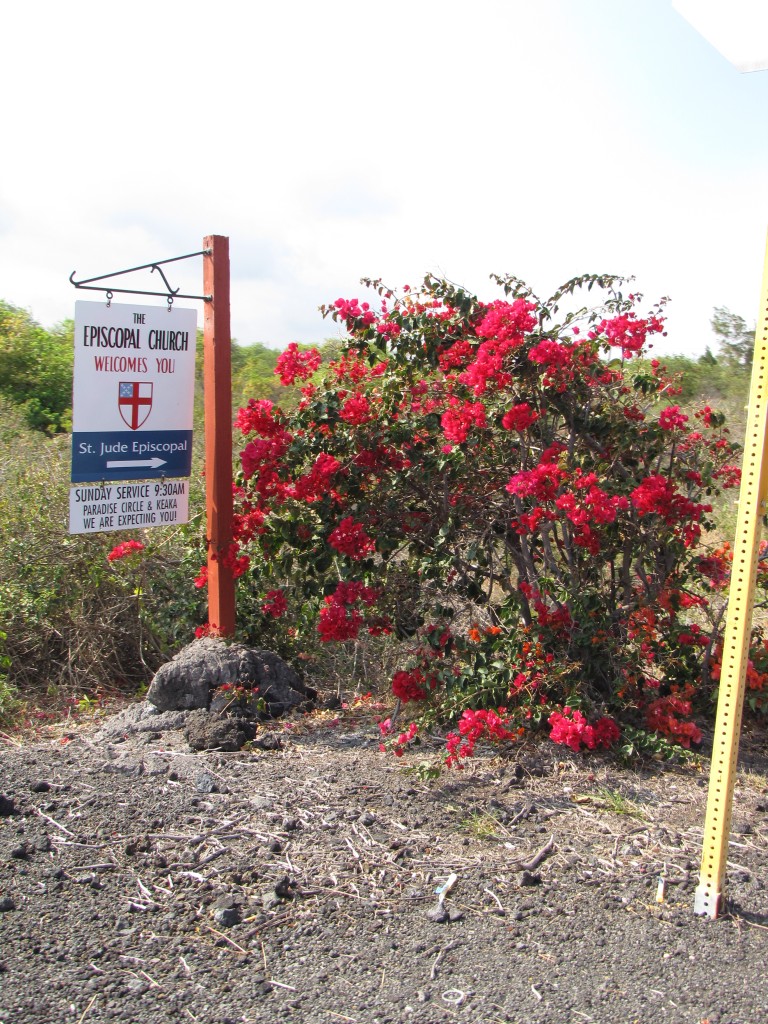 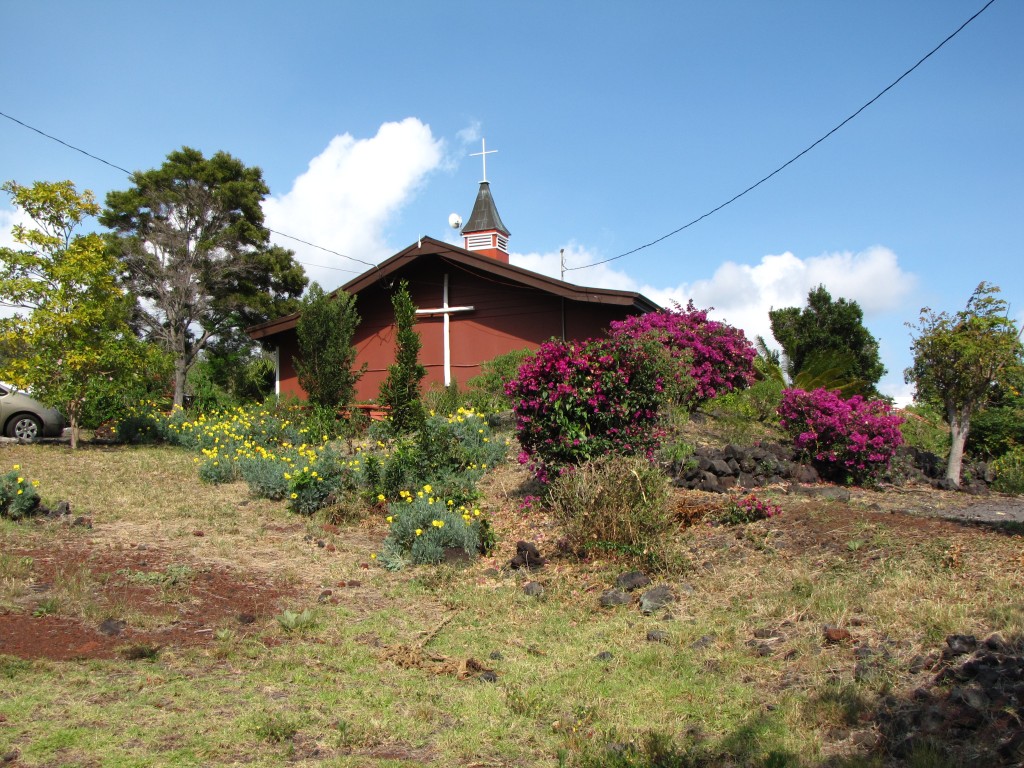 There is a Vicar position open if anyone knows of someone who would be interested!

When we got home we had some supper and put Elise down for bed. Beth stayed with the boys and put them down while Tim and I enjoyed the waves crashing and a Hawaiian sunset on our rock beach. 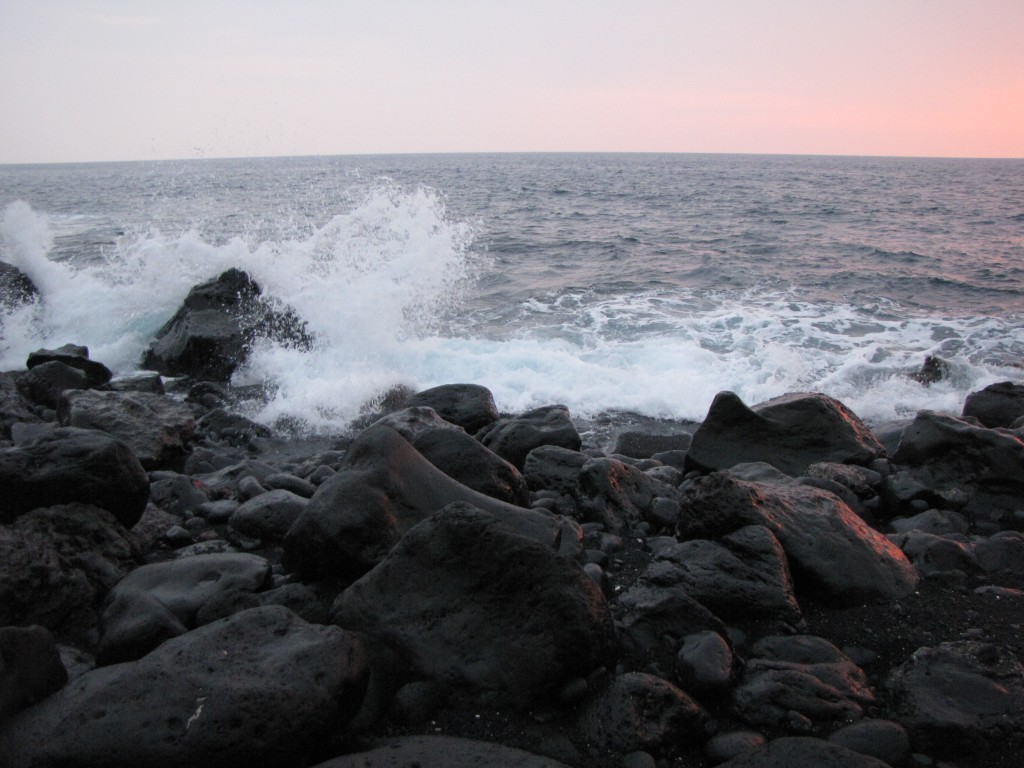 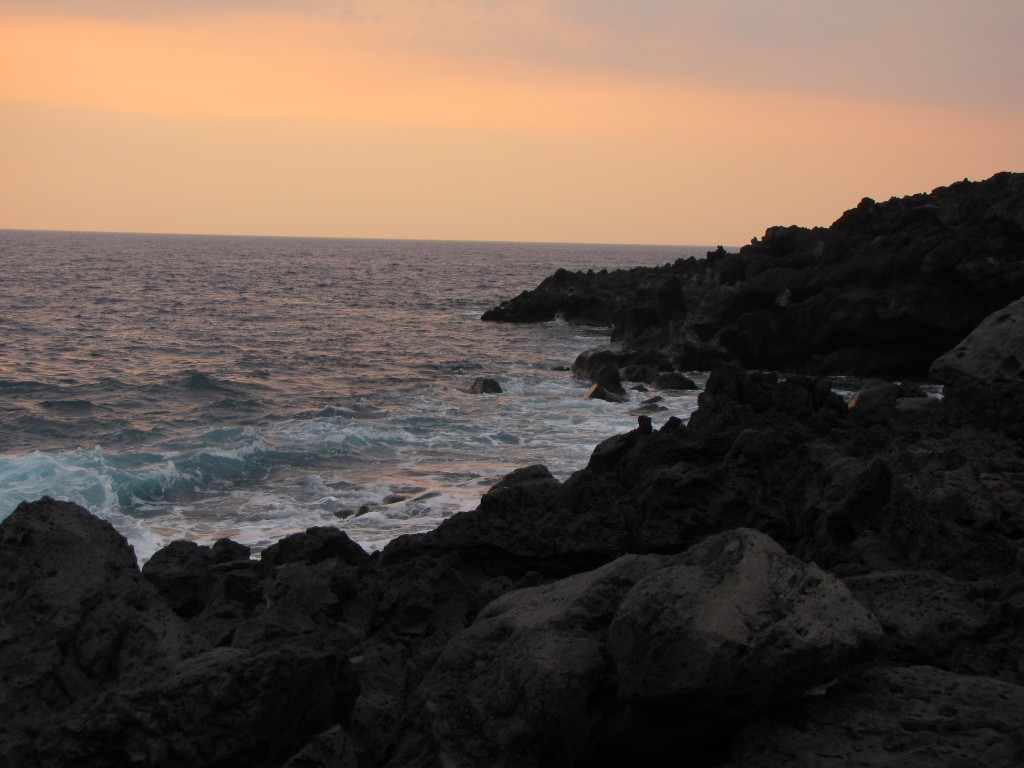