Tim was not excited about this project until we started working on it. In fact he told me, “we are not building a sling shot. Do you seriously want to weaponize our 4 and 6 year old boys?!”

I didn’t think a bungee cord and some scrap lumber would be “weaponizing” them but after some reflection I saw where he was coming from. It doesn’t take much to go from plush Angry Birds to rocks.

The boys had already started playing angry birds by building towers with their cardboard bricks and placing their schleich farm pigs on their towers and tossing their birds at the towers. They even rounded up a few wooden eggs from the play kitchen to be the golden eggs. I don’t know what the golden eggs are for but this was really exciting for them. 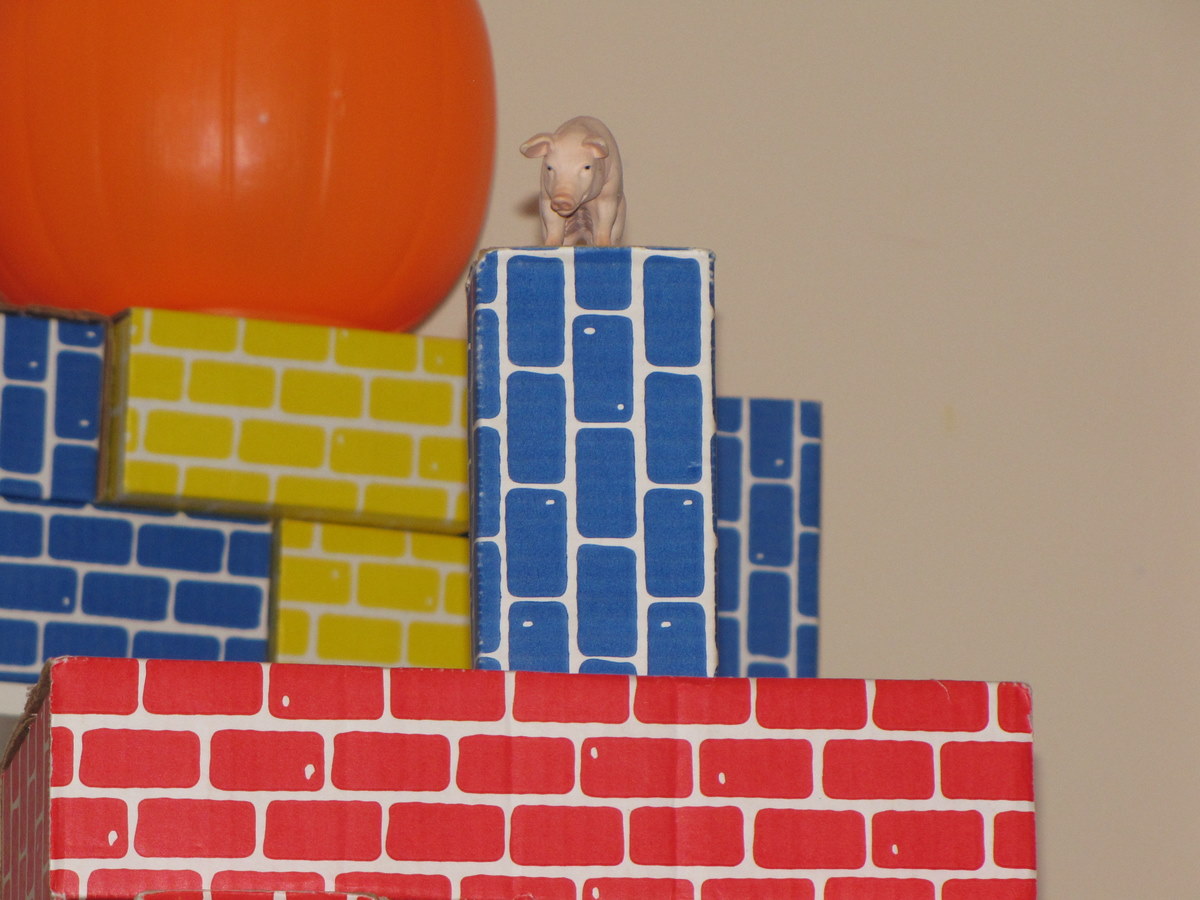 Despite the warning of weaponization, I took the kids to Menards and we picked out a few bungee cords. A home can never have enough bungee cords, right? Even if Tim put his foot down and said no to the whole thing, at least we got a few new bungee cords out of it. You never know when you will need to secure something with elastic bands.

Uncle Steve was planning on coming up for the weekend, so I played that card and once the two of them started dreaming up ways to make a sling shot, I knew I had them. Because really, even at just under and over 30 years old, they are still boys that want to launch stuff. It is probably why they play all those video games!

Tim said we wouldn’t need lumber, I wagered that we would. Guess who was right?!

Our DIY’d Ana White (check out her site. she is amazing) furniture was the first bit of lumber that was used. That console table and side table are sturdy. Perfect for attaching heavy-duty bungee too. Plus when we built them we “distressed” the wood so any nicks would just add to the charm. Tim was the mastermind behind using clamps to hook the bungee cords too.

Then came the challenging part. Attaching a basket to put the plush Angry Birds in. I was upstairs working on the mantel project when I saw Tim empty out one of my storage baskets. He sheepishly asked if I needed it. I told him to put it down and walk away. Find something else. Check the tupperware drawer. He rigged up tupperware, a block of wood (more lumber) and some rope and they launched a few birds, but the tupperware didn’t hold up so he went on another hunt. I helped him look (aka-protected my woven baskets from being martyred for the cause) and found a silicone giant cupcake mold in the kitchen. I got the mold as a white elephant gift at last years Christmas party and never used it once.

Tim took two scraps of 1×4 and placed it them on either side of the baking mold. Then he drilled two holes through the whole thing and threaded rope through as a handle and knotted it around the bungee cord. 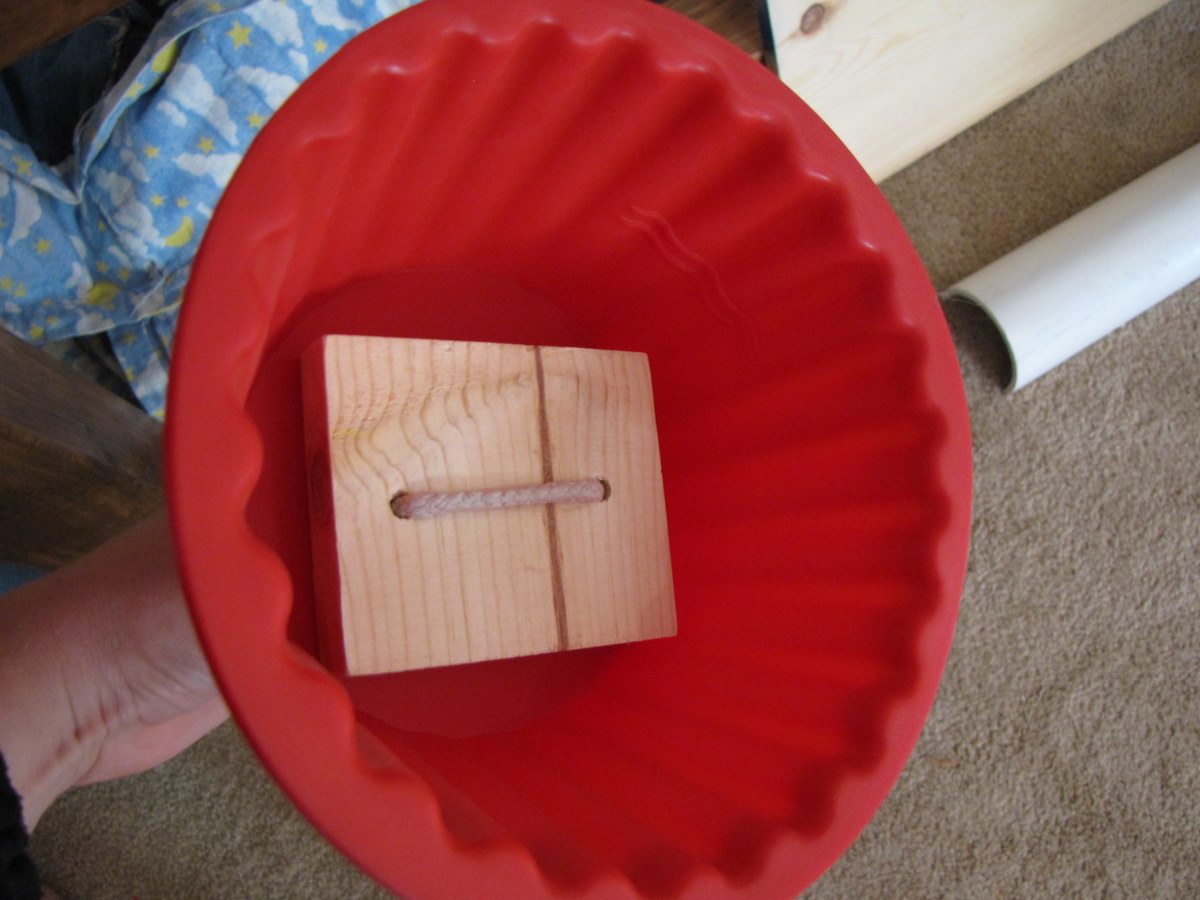 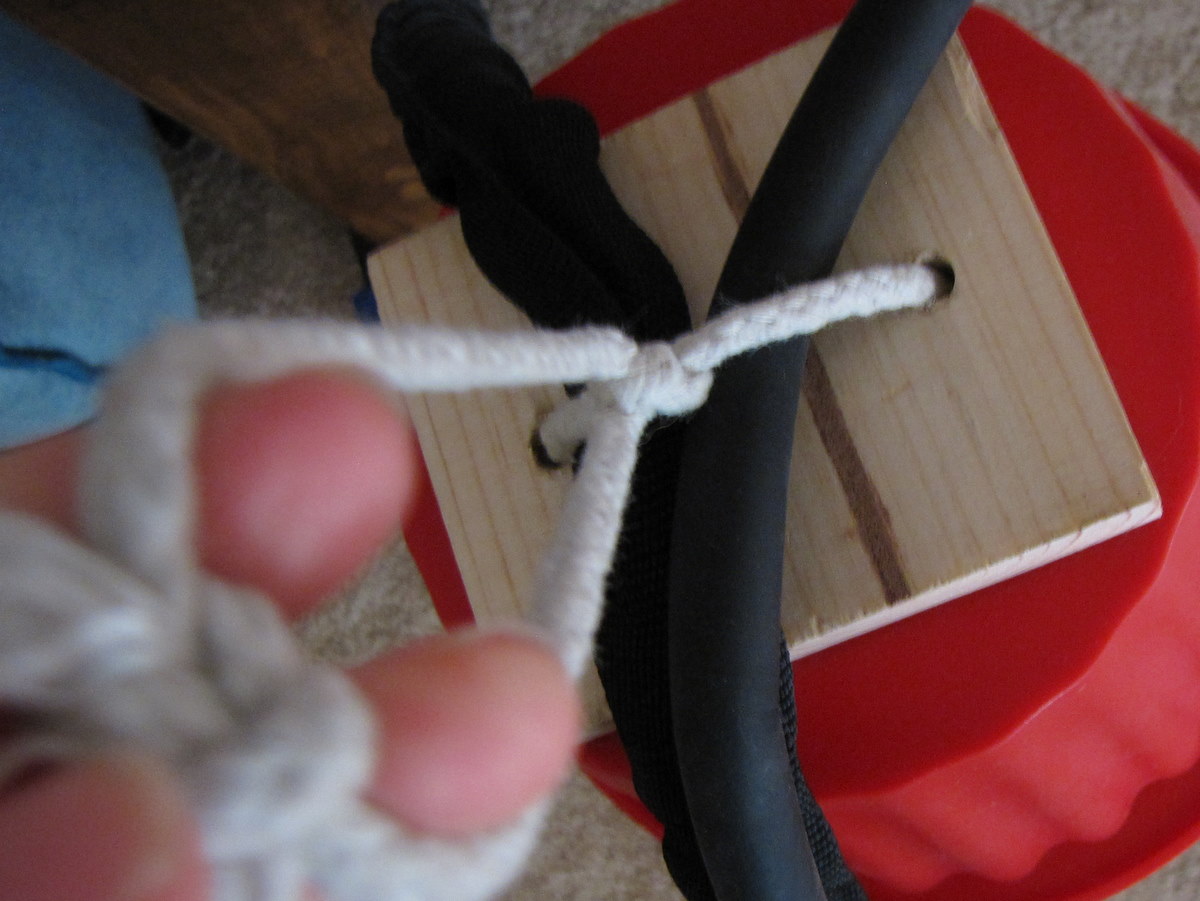 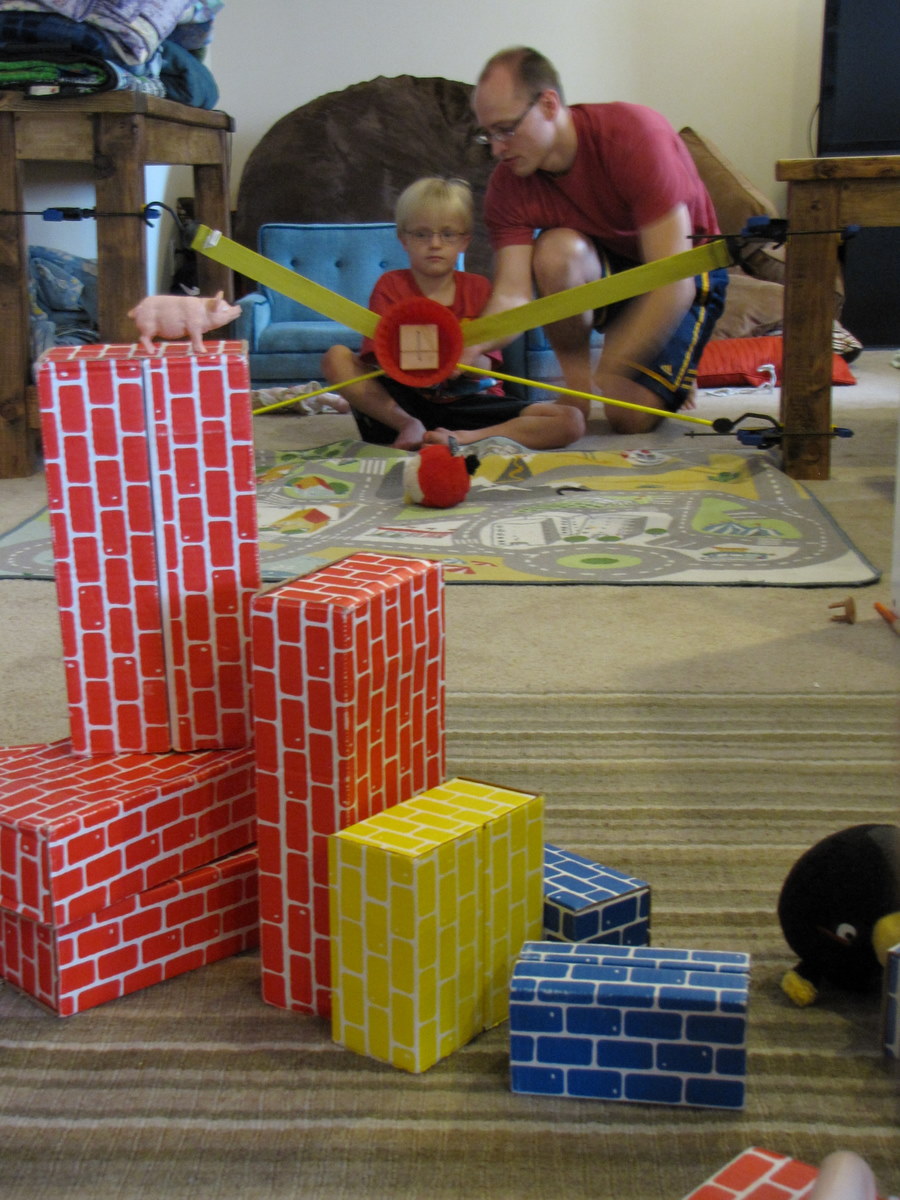 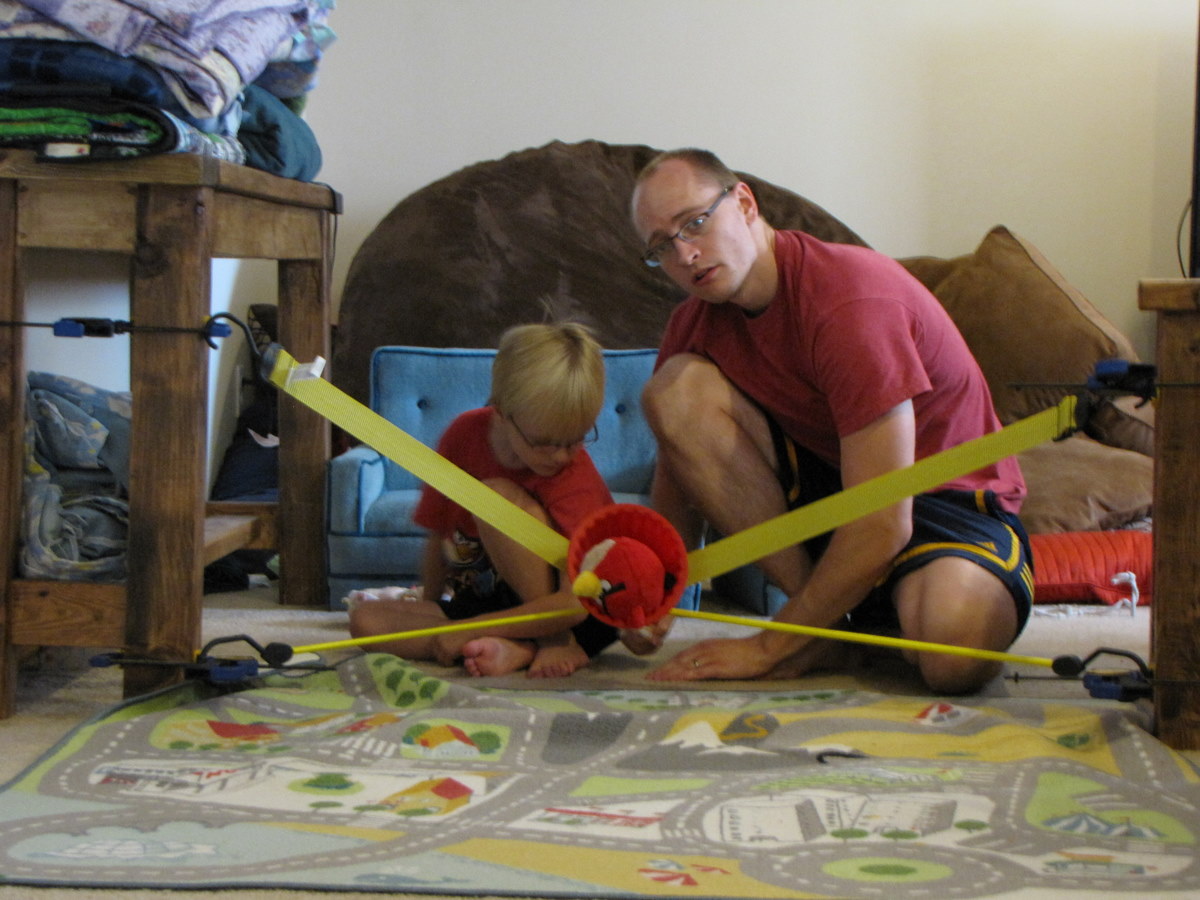 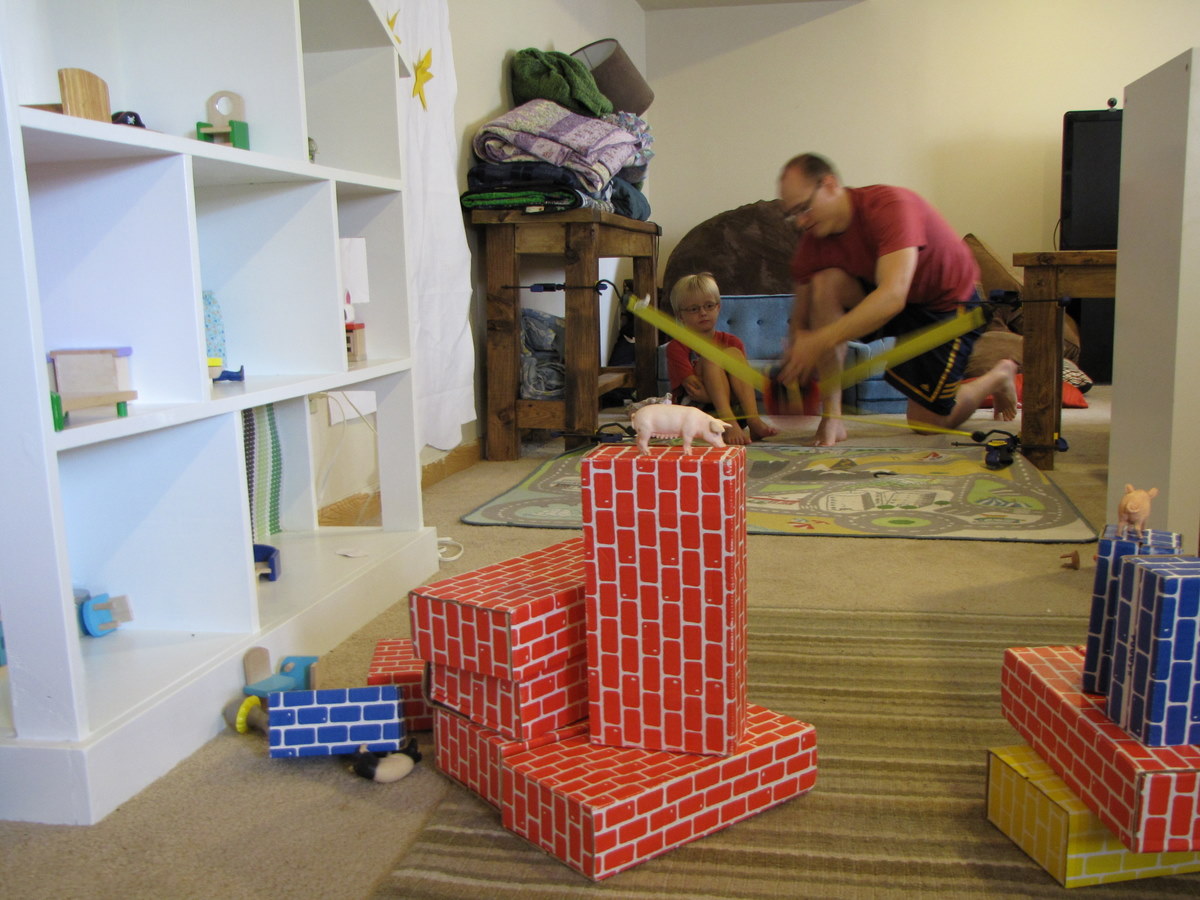 It worked but the bungee was a bit too intense for the kids… so Tim set off to hunt down my under used exercise bungee things while I went to Menards (my favorite kind of store. I would take a home improvement store shopping spree over a clothes shopping spree any day!) and bought hardware for the built ins.

When I came back from Menards. This is what they had. 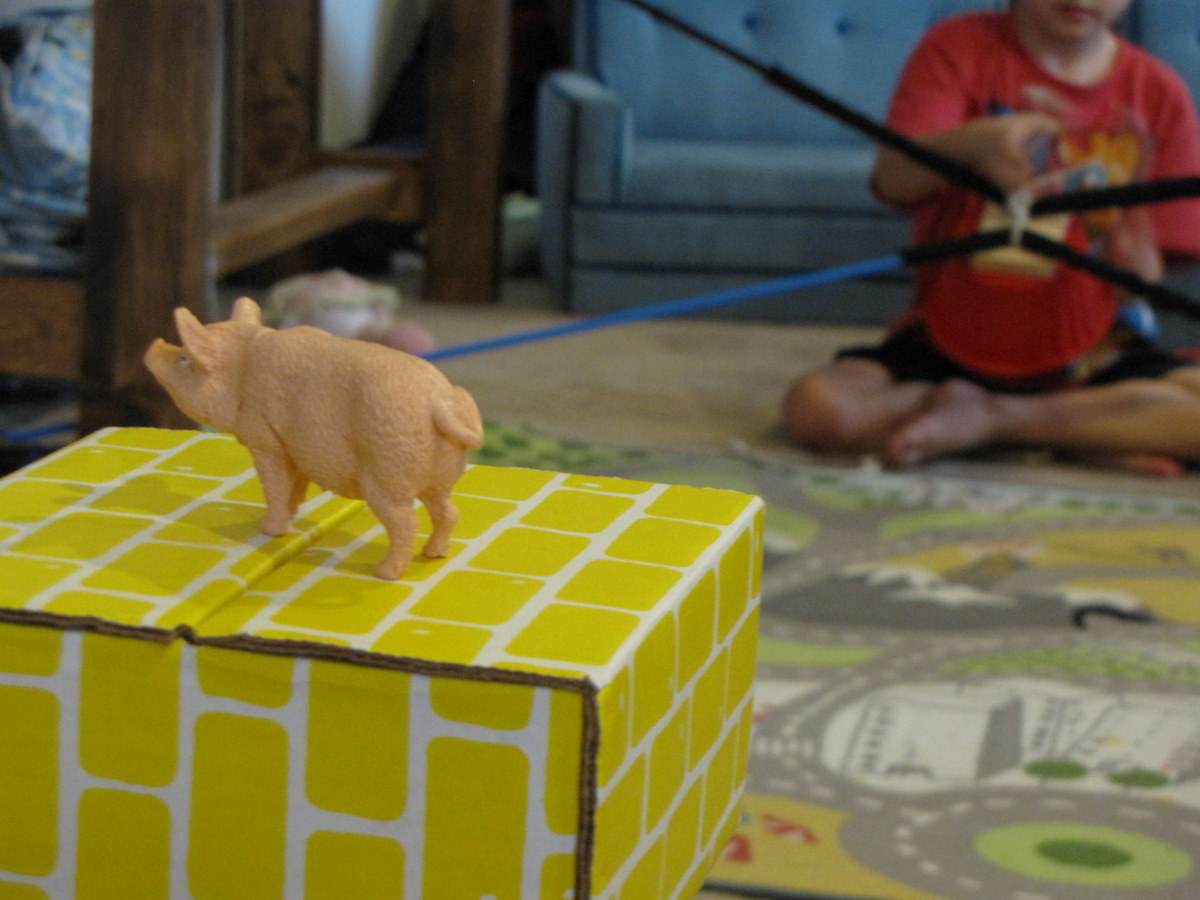 It worked great and the boys could launch it all by themselves.

I quick cut out some felt stars and hung a yard of felt on the wall and then, game on. The boys claim they got to level 16. 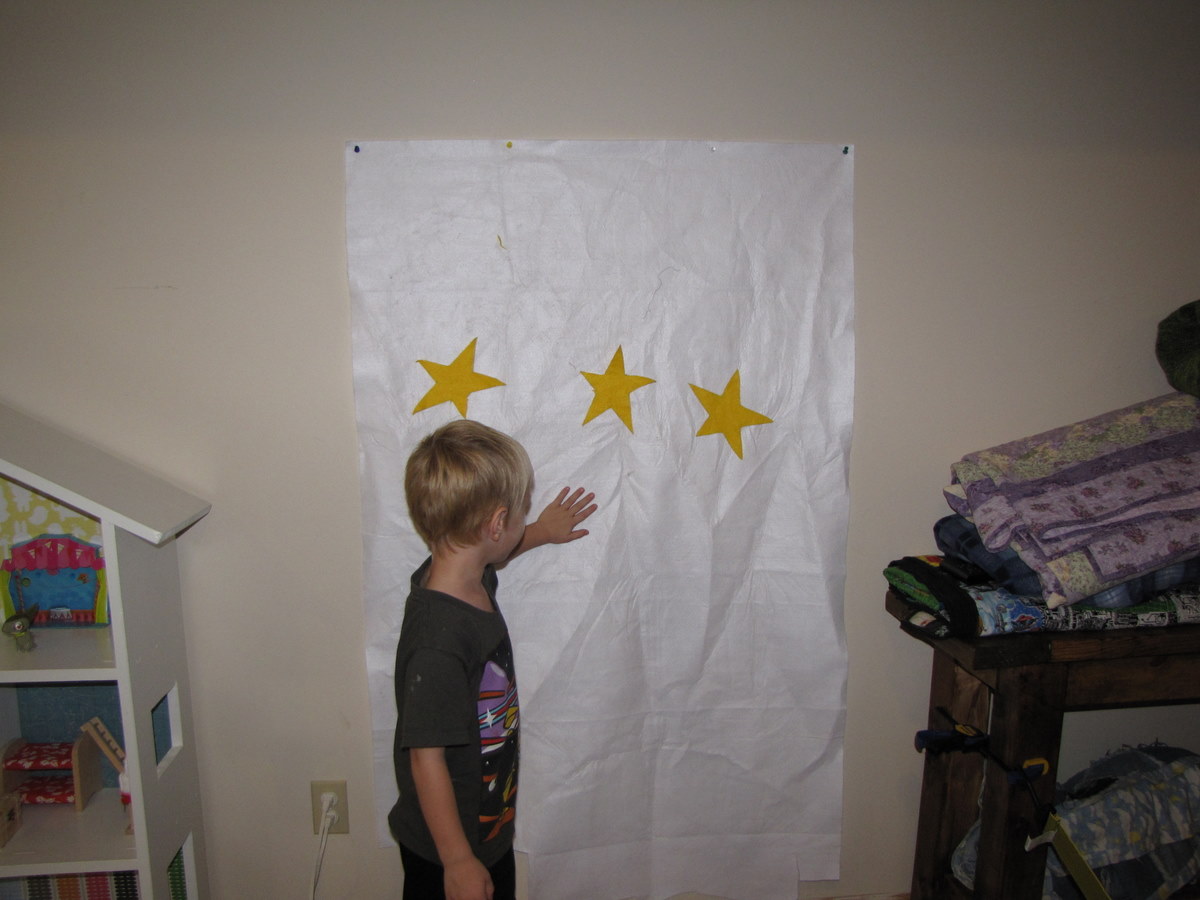 more pics here & i will add video as soon as I can.