These past 8 days have been packed full.

The boys both had school programs and they were adorable. Is there anything cuter than 4-6 year olds sing-shouting Jingle Bells?! I didn’t think so until both Michael and Patrick took a moment in the middle of their performances to make eye contact with me and wink. So cute.

After Michael’s program the parents got to get their glue and glitter on and help make some sticky Holiday crafts with the kids. So much fun. Michael’s favorite song was Up On the House Top. 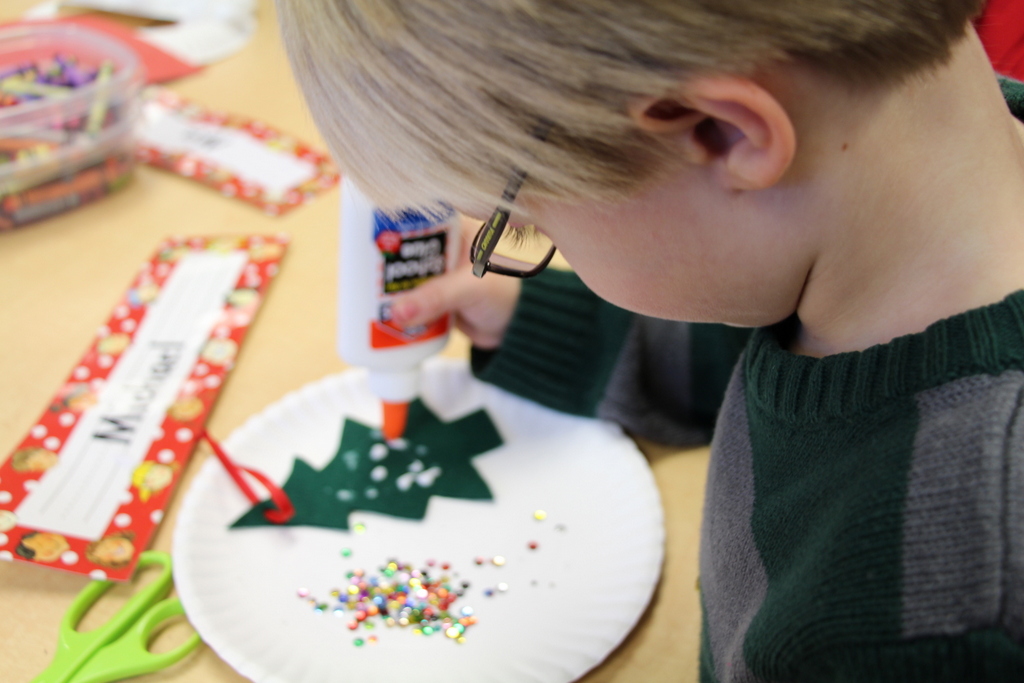 We were equally sticky after Patrick’s program but this time it was sugar, not glue. Patrick’s favorite song was 5 Little Christmas Trees. 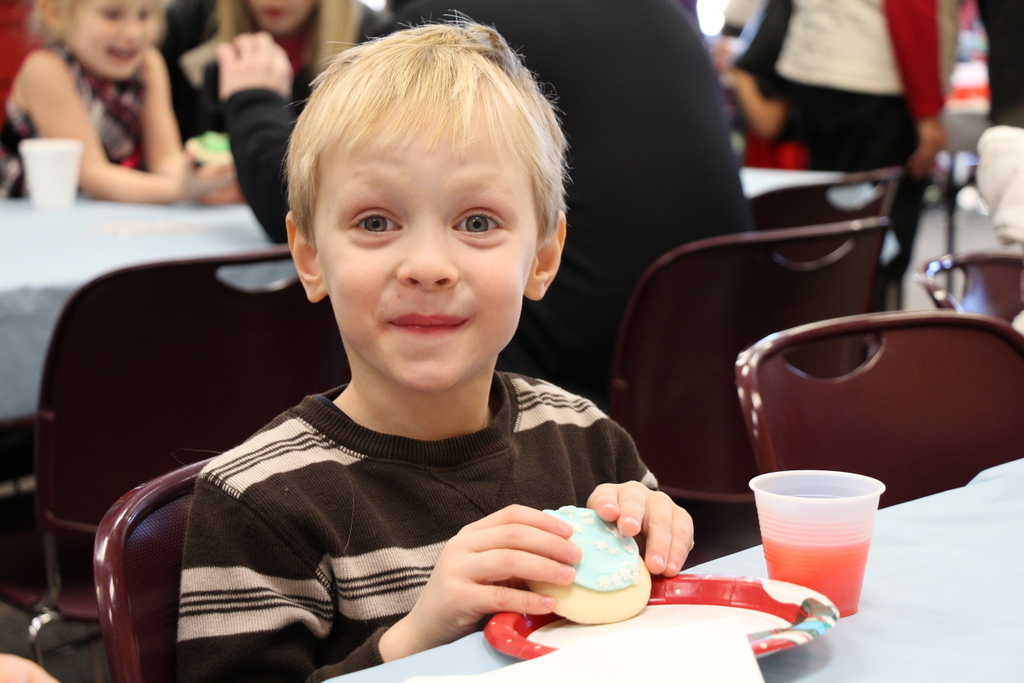 We spent a lot of time finishing projects late into the night. I am still kicking myself because when we pulled into Minot both Tim and I realized that we forgot to pack two of the Christmas presents we made for family. We were able to finish both a cradle and a doll bed (plans by Ana White), a mattress, quilt and pillow for each bed, wooden swords for the boys (planned and built by Tim), two Jake and the Neverland Pirate vests (that I was cursing here), a handful of hand painted gold doubloons for each of our pirates and the above mentioned forgotten gifts.

The kids, Lucy, Tim and I had a pre-Christmas family Christmas the night before we left, complete with treasure maps leading to the boys’ final gifts of the night.

Before we did gifts, though, we decided to start a new family tradition based of a Jewish tradition that Patrick and I learned about from another family the day that I rolled lefse with his class for “Share your holiday tradition day” at his school. Tzedakah, as the book that was read to Patrick’s class explained it, is the tradition of collecting things (toys, clothes etc) from around your house that you will not use in the coming year and donating them to charity before opening your gifts. Tim and I loved this for many reasons and thought that adopting it as a tradition of our own was a great idea. Each of the kids were required to find 5 toys. Here is what they found. 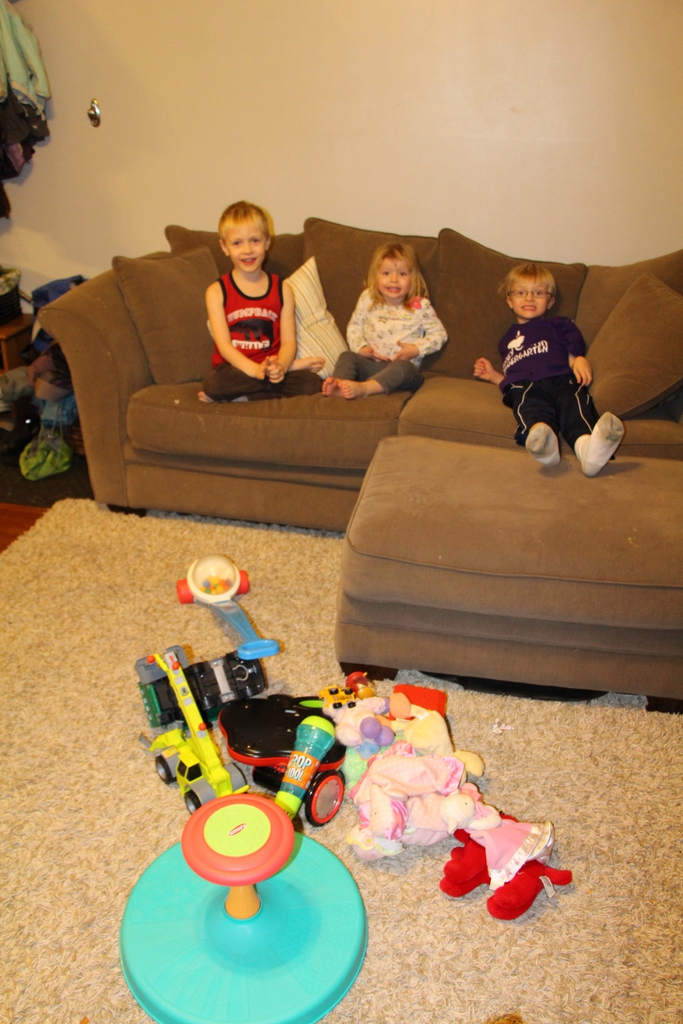 The kids were pretty proud of what they collected for charity but in all honesty if I told them they had to choose an arm to donate to science in order to open gifts I think they would have made the decision to be a righty or lefty in a split second just to find out what treasures were wrapped under the tree. 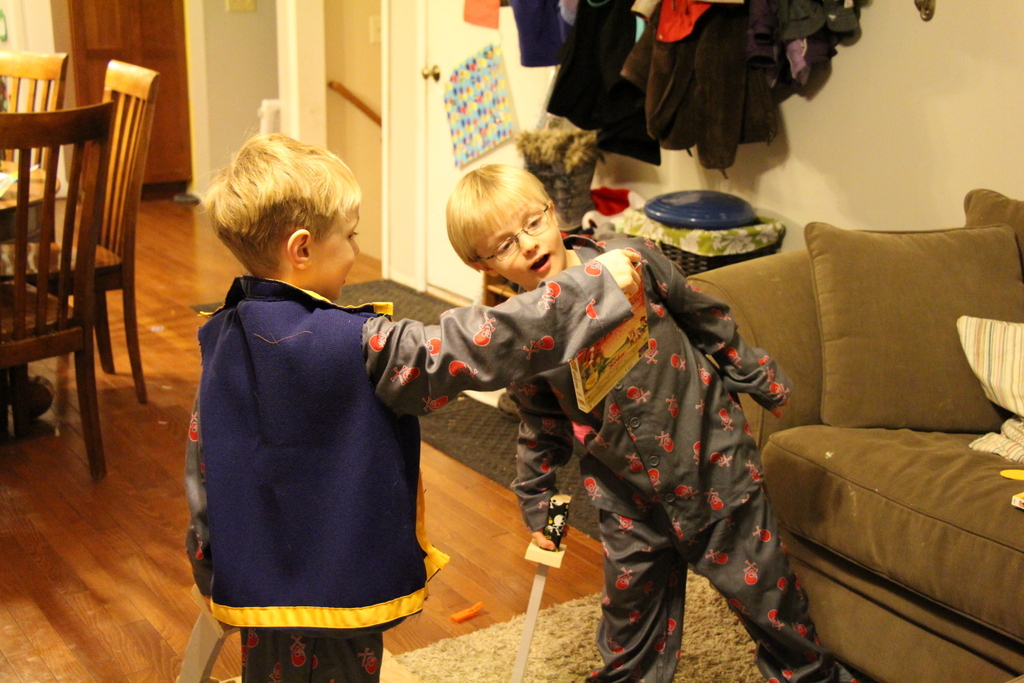 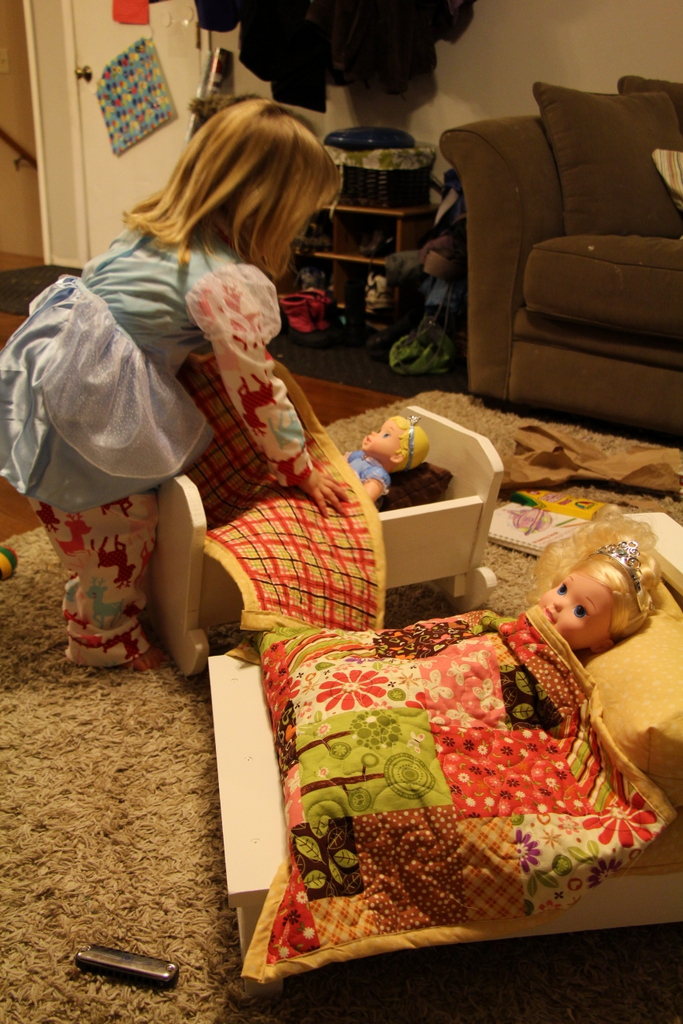 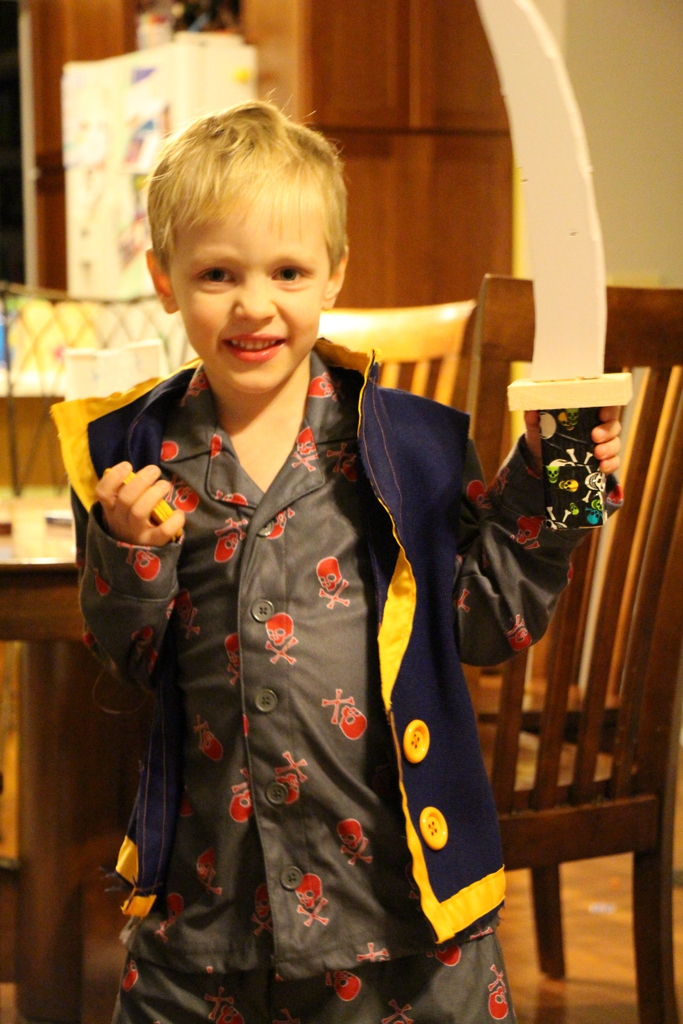 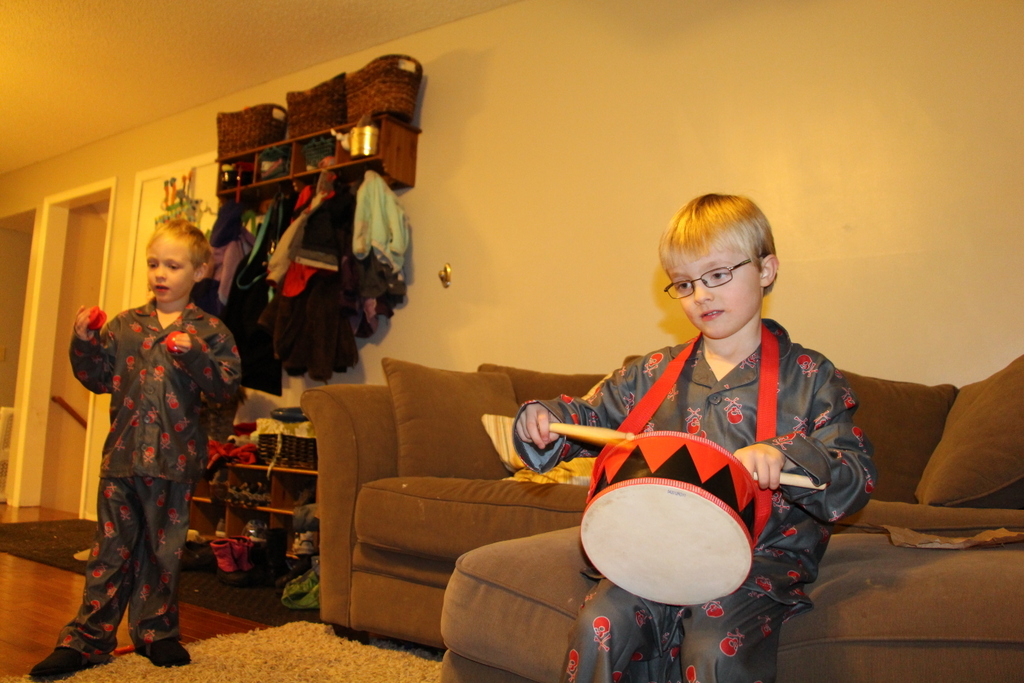 Santa came while the kids slept and brought an elf made gift of “Da Da Da Pipes!” Da Da Da pipes is what the boys have dubbed the green pipes on Mario Brothers. The game makes a “da da da” sound effect whenever you go down the pipes. The elves told me that all they did was buy 4 inch pvc pipe and these pvc adaptors, spray paint with primer and then with green spray paint. 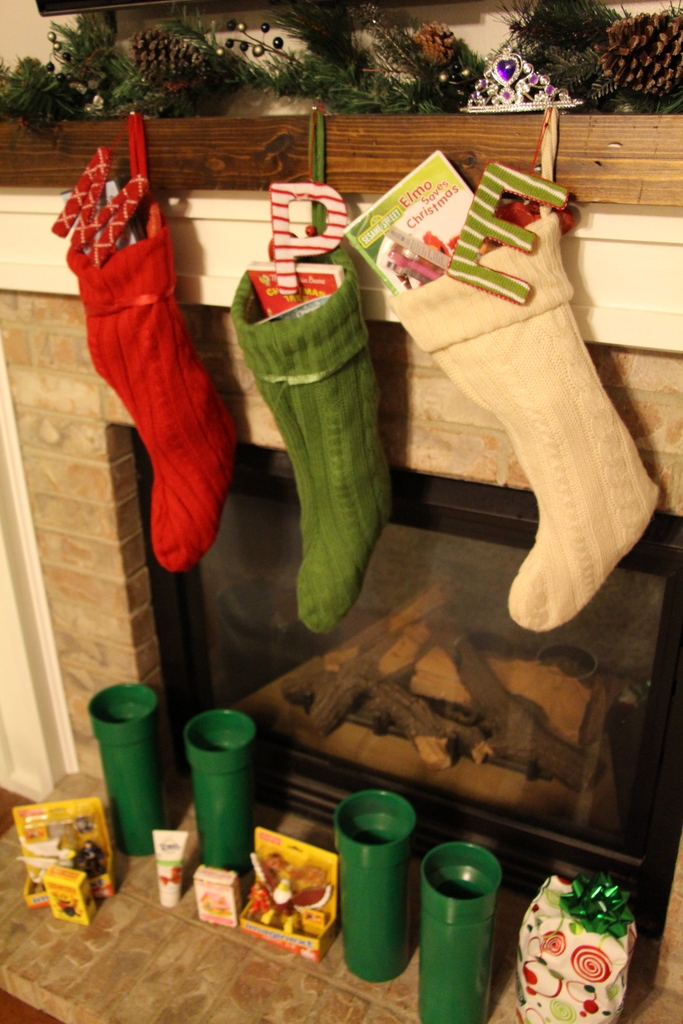 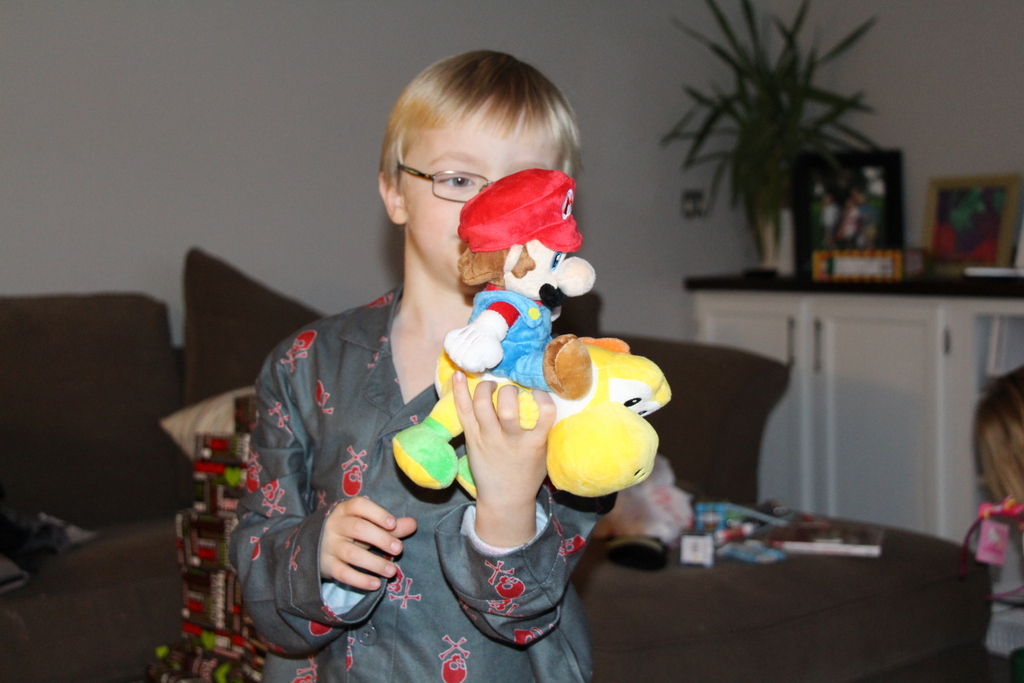 Tim and I really had fun making a lot of their gifts this year. It was even more fun to watch them open their homemade gifts. Elise loved her doll beds and the boys loved their pirate gear (Elise had a pirate costume too but lucky for me all that is required for Izzy the pirate is a pink shirt, purple leggings and a pink bandanna, all of which I found a target for less than $15!).

I promise we didn’t forget Lucy. She got a couple new Kong toys and some bones to chew. Here is another example of Elise photo bombing. This was supposed to be Lucy and her new Kong… 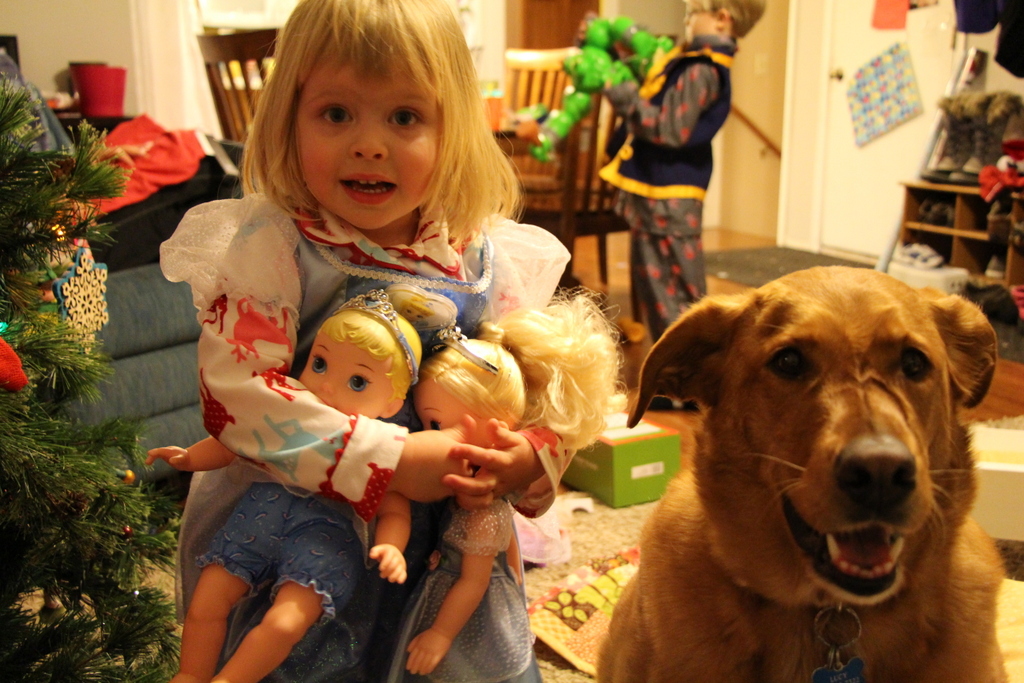 All of that Christmas chaos was before we even left for Minot for the first part of our ND Christmas tour.

Merry Christmas to all and to all I promise more pics (that will end up here) and posts soon.