Because Christmas was on a Tuesday this year Tim opted to take off the week in between Christmas and New Years so we wouldn’t have to drive back and forth from MN to ND twice in 10 days. It meant using up a lot of vacation time but it was worth it to get to Minot, settle in and stay for a while. We got a total of 6 days in Minot. The boys haven’t eaten Papa and Nama out of house and home quite yet but I think they are getting close.

The reason they haven’t eaten through their entire stock of homemade canned goods is because my parents hosted both Christmas Eve and Christmas Day dinners. Crazy right? I would NEVER take that on. But they did and the amount of food that comes with those meals is insane. Two fridges are needed to hold all the food in preparation, and it take countless Ziploc bags and many Tupperware to store the leftovers. To say we have been eating like kings these past few days is an understatement.

Christmas Eve is always with my Mom’s side of the family. It has been that way since I can remember and probably before that too.

After gorging ourselves on a traditional Norwegian feast of meatballs, torsk, pickled herring, smoked salmon and enough vegetable casseroles to sink a viking ship, we have to earn our Christmas gifts by singing carols. Again, another tradition that has been going on since before I could sing Away in a Manger.

My mom is always at the piano (one of the few times a year that actually she puts her piano performance major to use) and seated next to her is my Uncle Dean. He is the Tenor to her soprano. Back in the day they were quite the duo. Now they are getting old and bifocals are needed to read the sheet music. They still sound good but the I doubt they will be entertaining us with Gesu Bambino ever again. 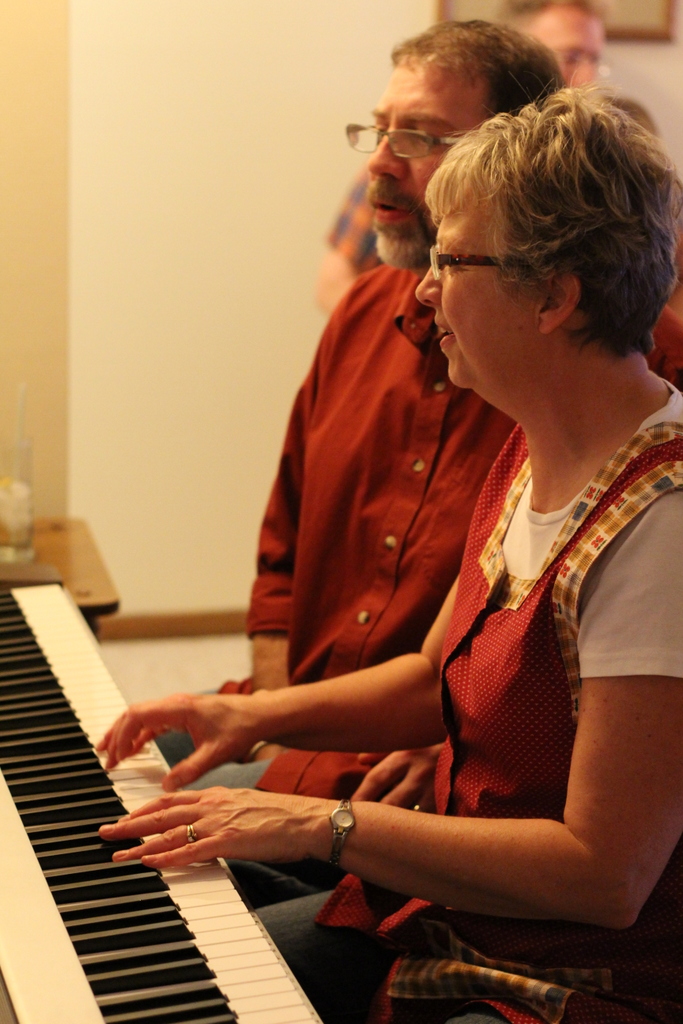 This is my Grandma Moo. This woman is my idol. I hope to be half the woman she is someday.  She is the one that directs this yearly family choral concert. She tells us what to sing and we say how loud. She lets us know when we are done and if we have done it well enough. If we haven’t met her standards she calls it our “practice round” and we try again. We all love her so much, so we sing. I love this photo of her holding my sweet Patrick. 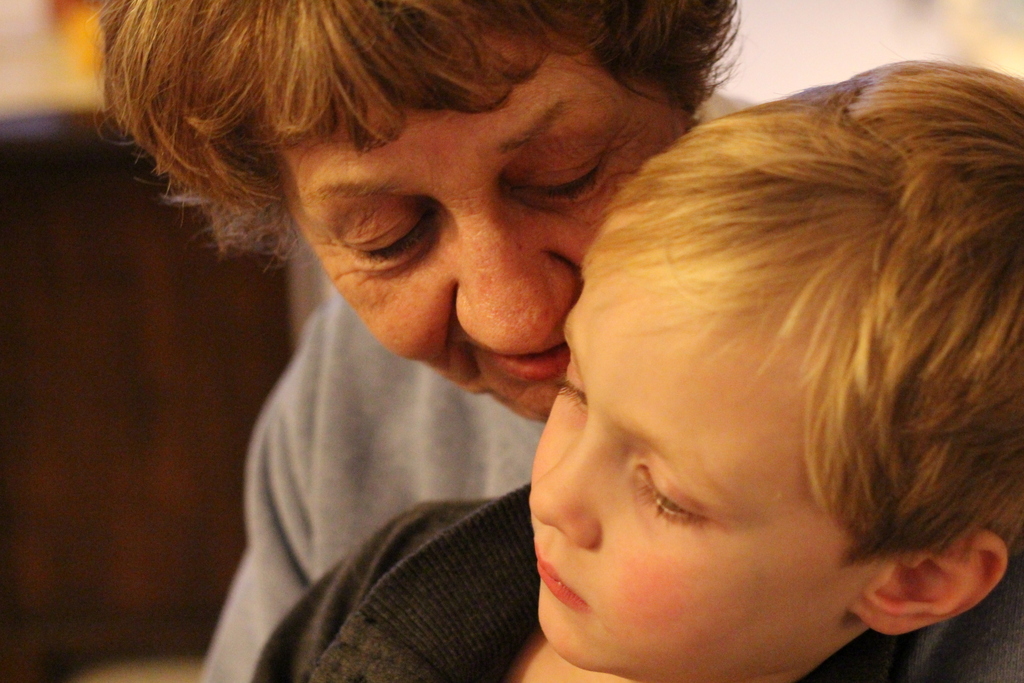 Elise was miserable and sick for both Christmas and Christmas Eve. She woke up from an evening nap long enough to listen to a few songs and to collect gifts. 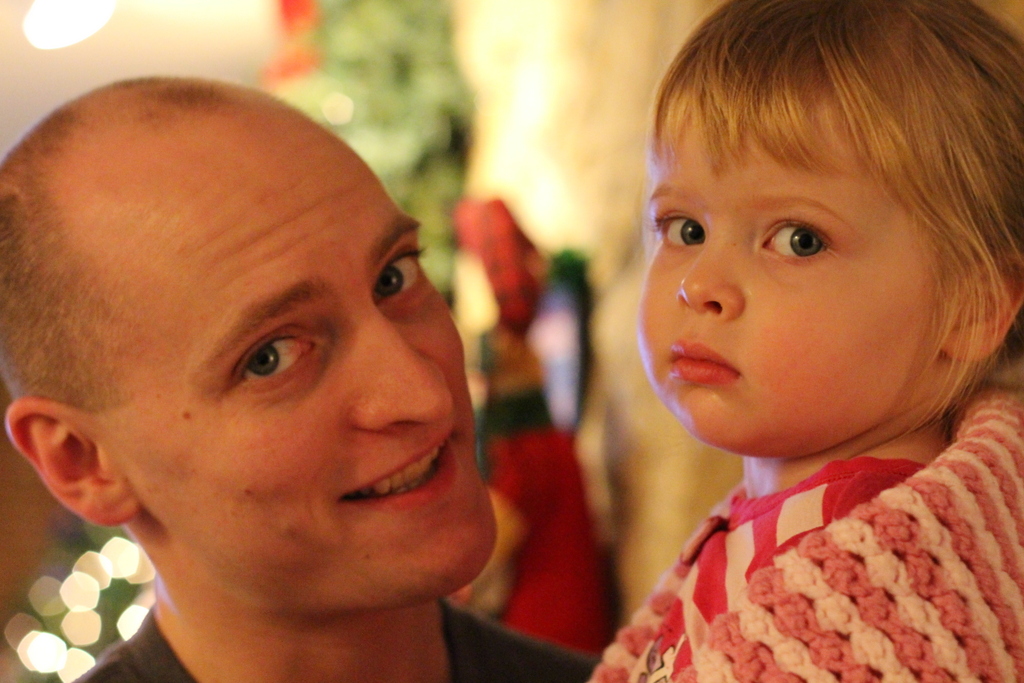 We didn’t sound the best this year since a few of us were sick and Michael (big cousin Michael) thinks he is too cool to round us out with his bass. 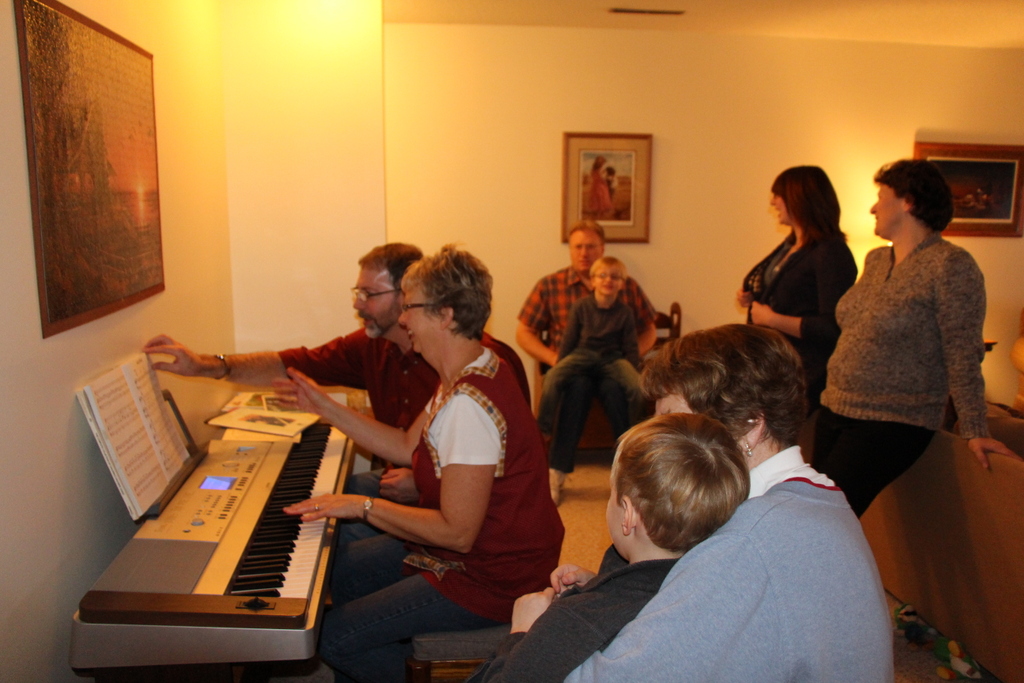 We all forgave him for not sharing his booming bass because instead of singing carols, he stuffed a pillow under the 30-year-old Santa suit and sang out a few friendly Ho Ho Hos. I think it is this Santa visiting on Christmas Eve tradition that had Beth believing in St. Nick far longer than her peers in school. 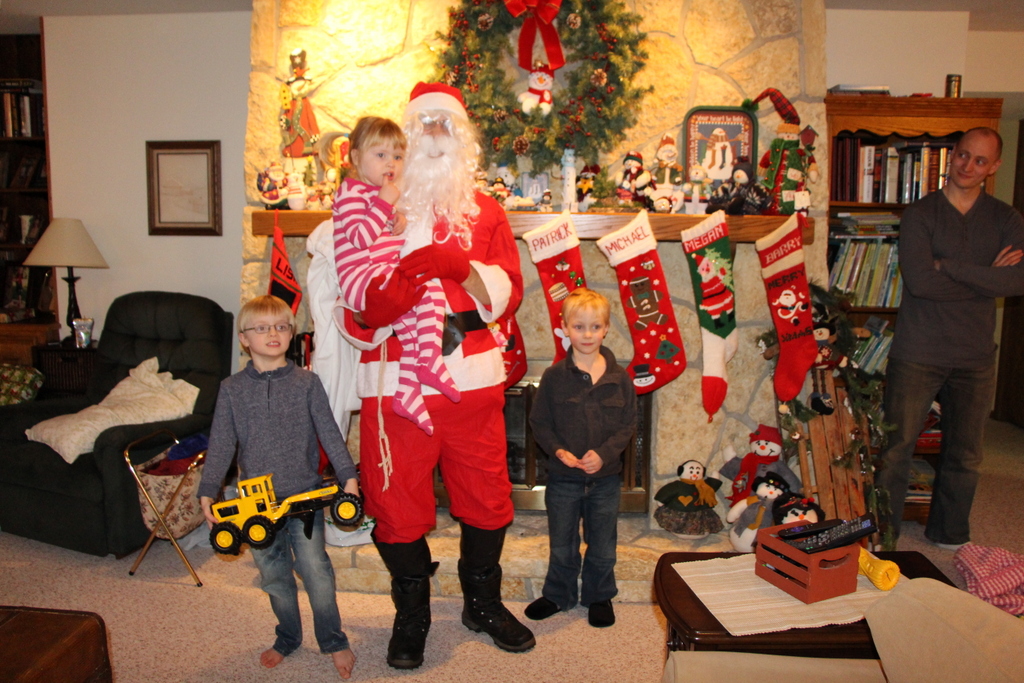 My family was generous, as usual, and the kids scored big time in the gift department. Elise got her first ever Care Bear, which she hasn’t napped or slept without since she opened it. The boys were thrilled when they unwrapped more Jake and Neverland Pirate toys. In the end, the award for favorite gift of Christmas goes to Grandma Moo. She gave all three kids a pair of cowboy boots and Patrick is in love with those boots. He wears them with jeans. He wears them with footie pajamas. The kid can work a pair of cowboy boots. 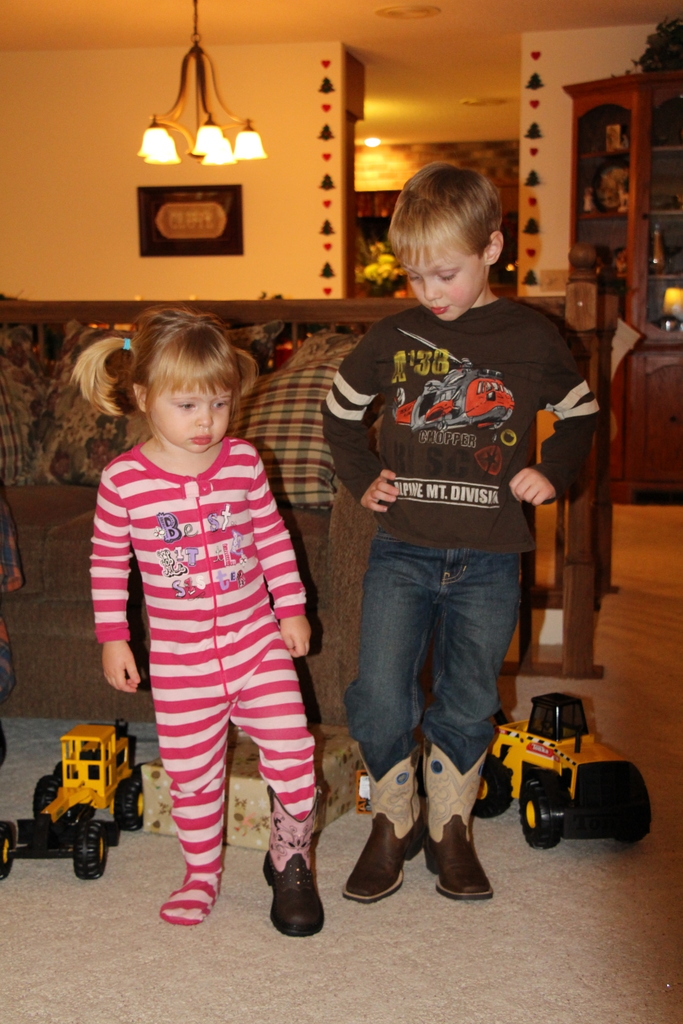 Over-eating, singing carols and opening gifts is all great but the best part of the Arnold Christmas happens after the kids go to bed. Coffee is served, the treat trays are brought out and the stories begin to flow. 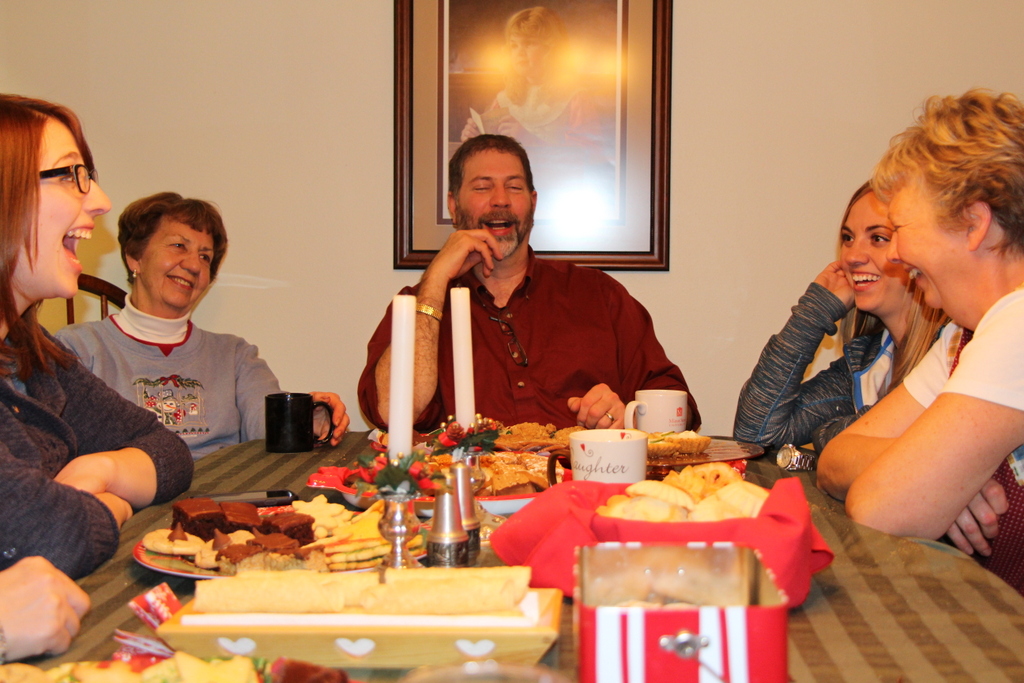 The later into the night it gets, the more incriminating (and entertaining) the stories are. Lets just say this, farm kids have a lot more fun than city kids ever do. 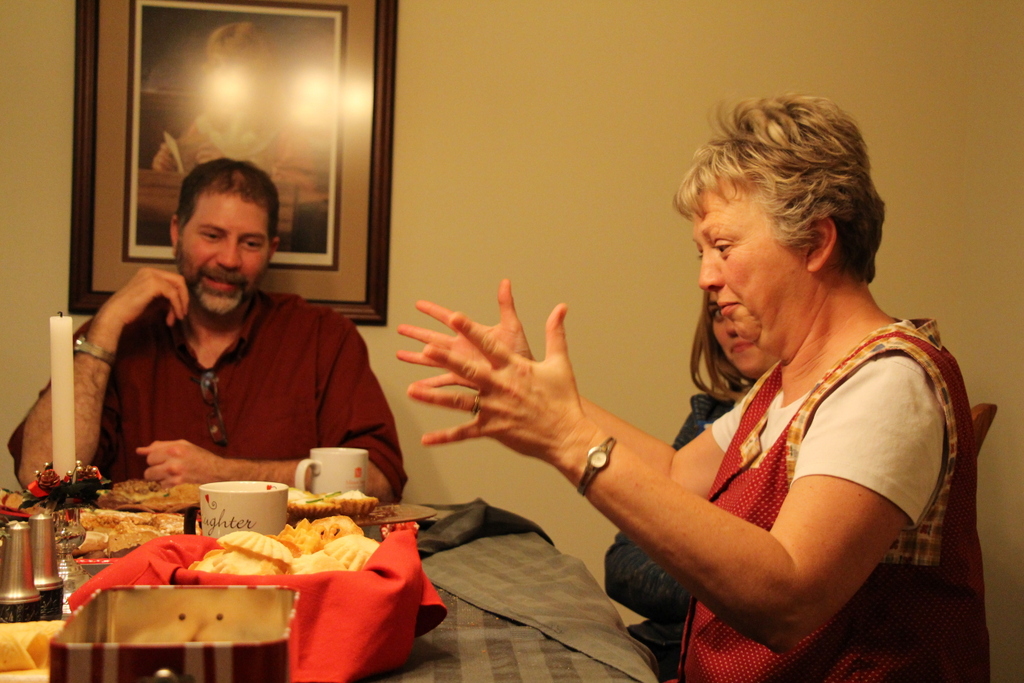 I am still learning my new camera and I wish I had focused on the people and not the treats in this photo but it still might be my favorite from the night. It captures what Christmas Eve is all about,being with family and hearing stories about the farm. 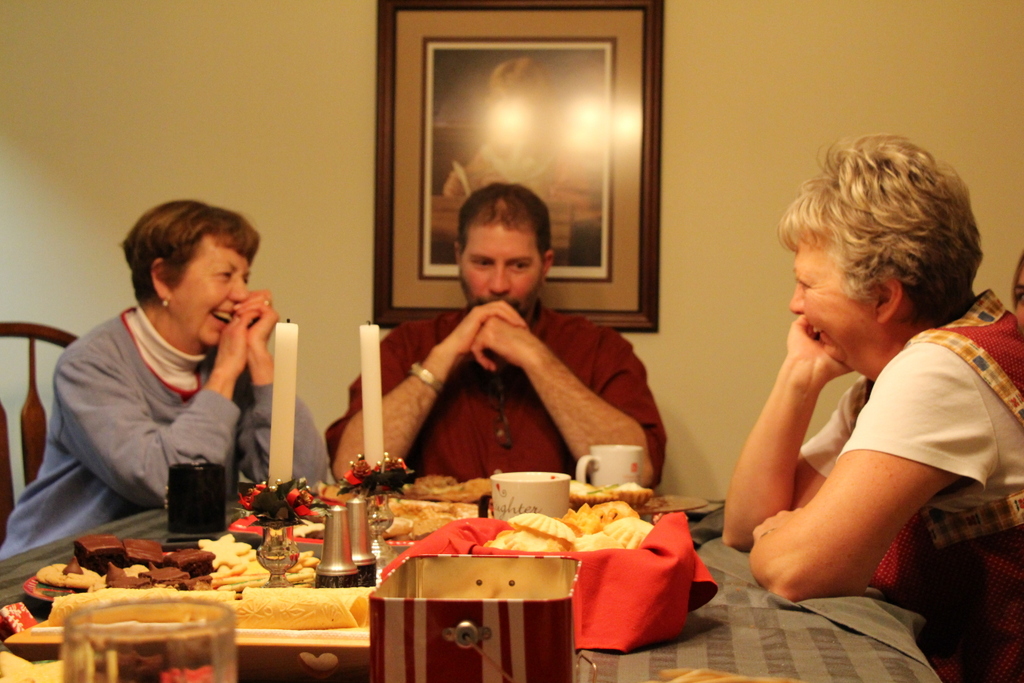