See what I did there? I titled the post after the Sondheim musical Sunday in the Park with George which is based on the artist George Seurat who pioneered the pointillism technique of painting. Tim and I were lucky enough to see some of his work in a London art gallery in 2005. The paintings are breath-taking in person. I am no artist but I was shooting in Manual mode for the first time on my new(ish) camera and it is Sunday and we were in the park so yeah…. See Dad, I told you I would put that BA in Theatre to use someday. Don’t you all feel smarter and more cultured? You are welcome.

Here is what I got.

The first dozen or so photos were completely white washed out because I had the White Balance set to a “cloudy day” setting and I guess the camera thought it was sunnier out than I thought. 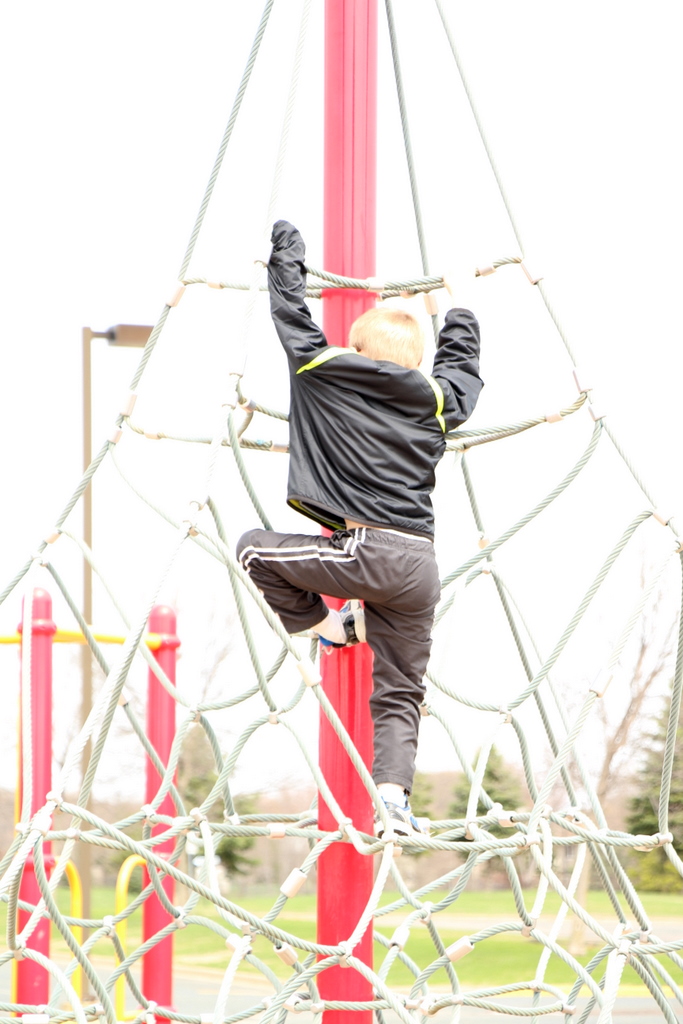 I love that Tim plays just as much as the kids do when we go to the park. He really is an amazing Dad. I hope that the kids will remember climbing, sliding and jumping at the park with their Daddy. Here is photo proof even if you can’t see any blue in the sky. 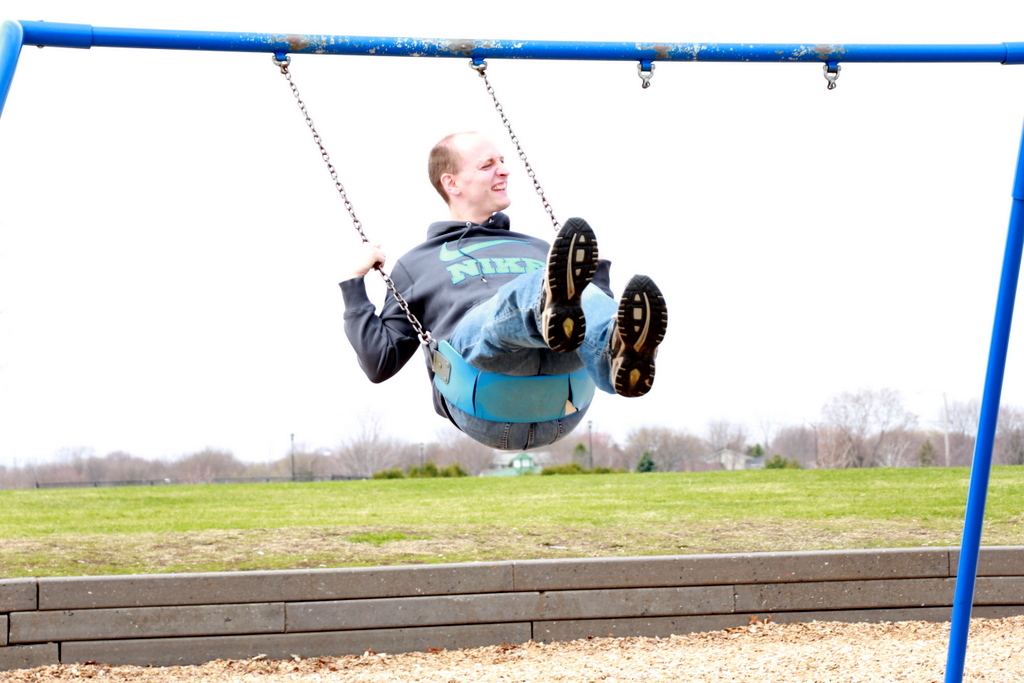 This would have been one of my favorites if I would have had the white balance on a better setting. The kids just loves to hang upside down. 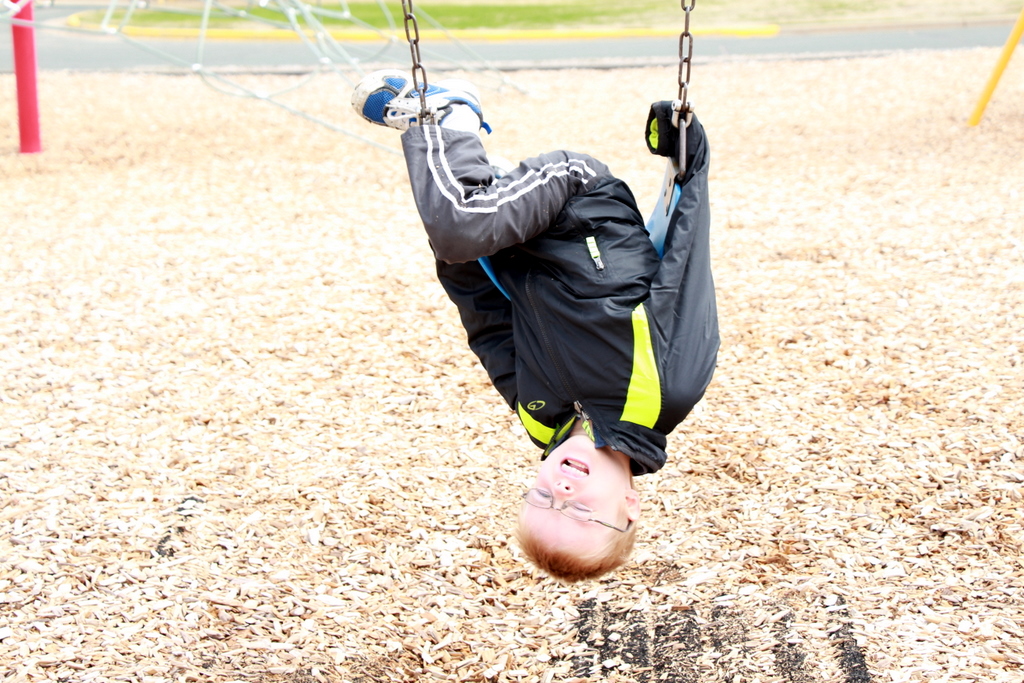 The wrong white balance didn’t ruin this photo. I don’t think anything could ruin a photo of a Daddy and Daughter swinging. I remember doing this in Oak Park with my Dad. 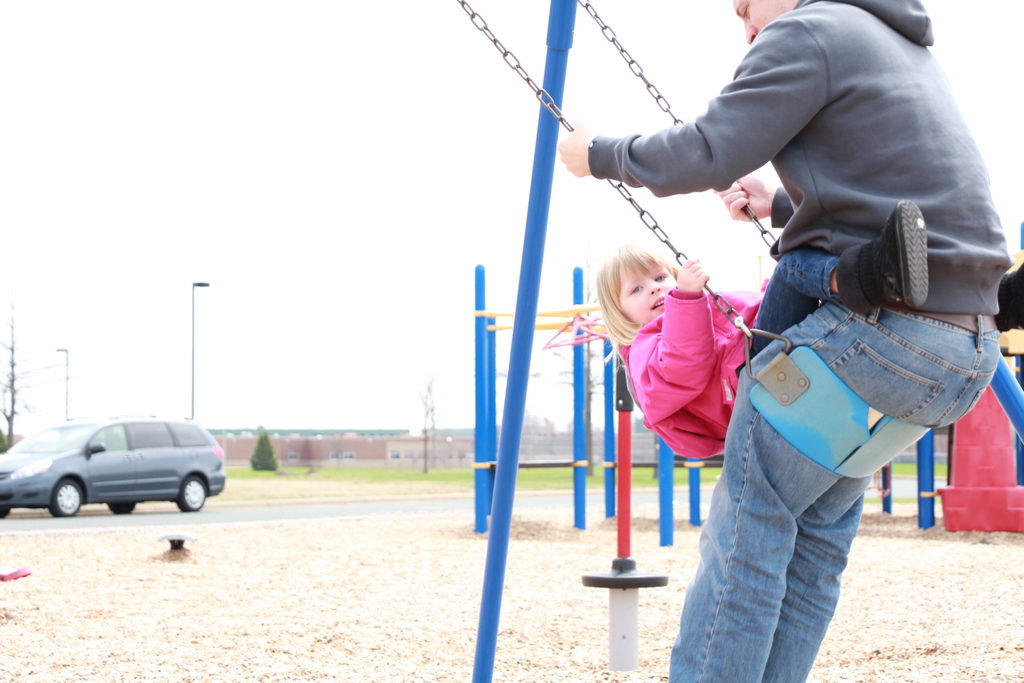 It was when Patrick joined the party on the swings that I realized that I needed to do some major camera setting overhaul. I love this photo. I think it captured Patrick is his truest form. He is pretending to be the bullets on Super Mario (Patrick has always favored the villains over the heroes) and he has this look of mischief that makes you think twice before turning your back on him.  But he looks so sweet in his villain-ness that you don’t care if he is good or bad, you just love him. THAT is Patrick. 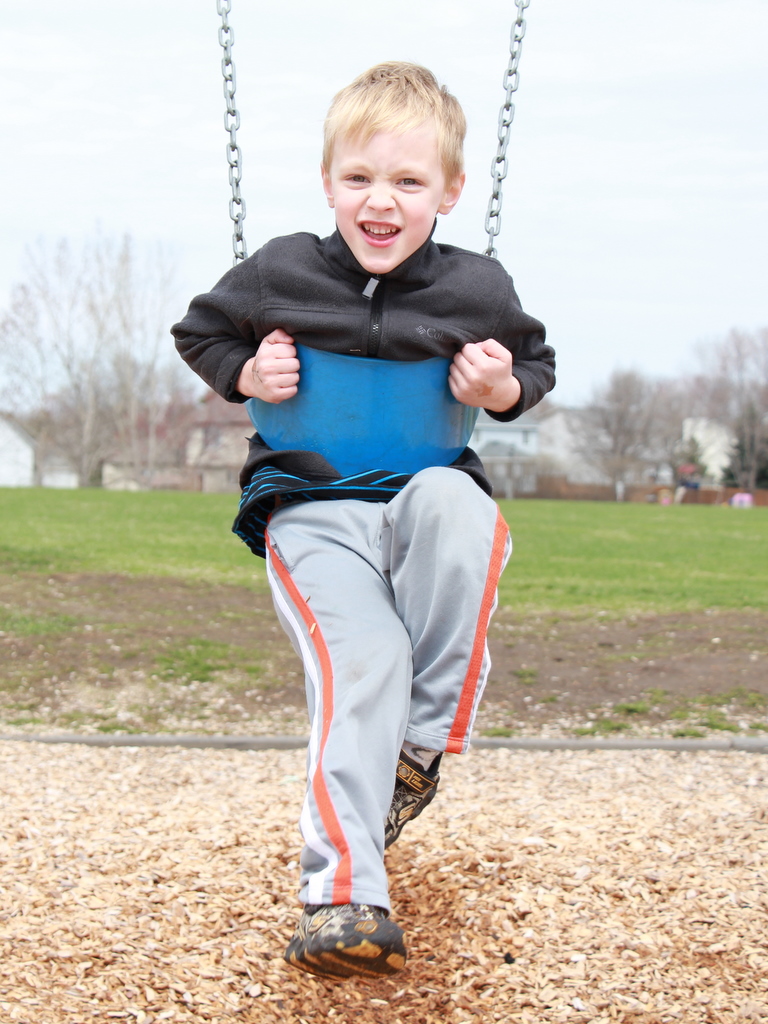 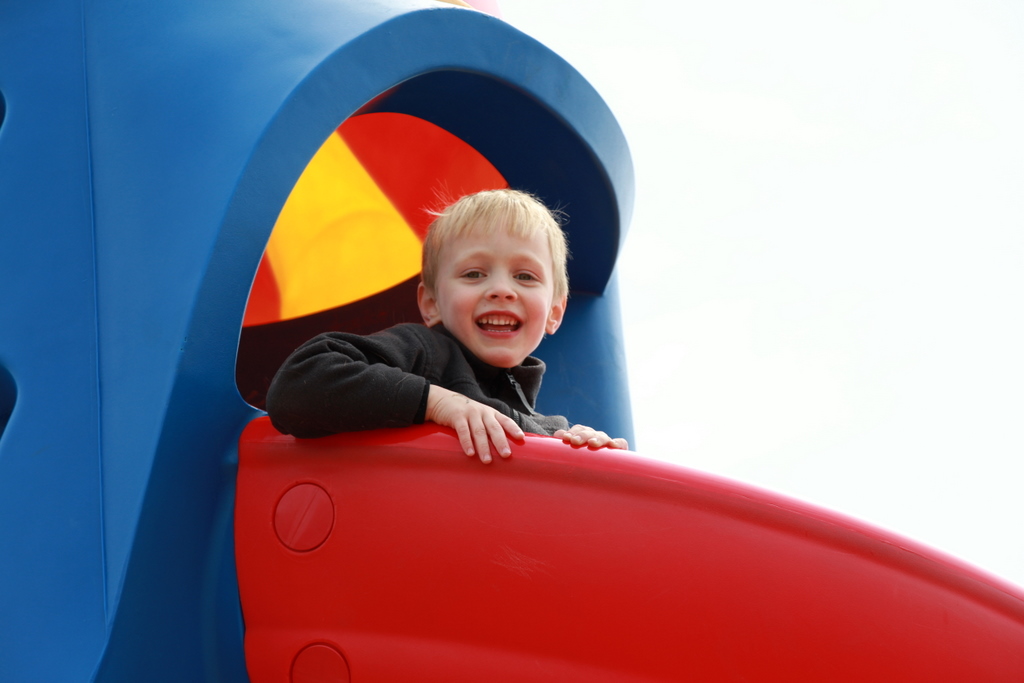 Here my white balance was good but my focus was a bit off. Playground we are at is the playground at Michael’s school. He knows this playground well and he was excited to show his Dad what a good climber he is on the “spider web.” Tim, being the awesome Dad he is, climbed the web with Michael and I am glad he did because when Michael got to the top he lost his footing. Michael didn’t fall, he caught himself but he slipped enough to scare him. He was shook up pretty bad. He is sensitive in as many ways as he is insensitive.  He was scared and feeling really nervous. I wish I was able to capture the moment better as Tim was talking to him and reassuring him. At least the sky was blue in the photo and not whited out. 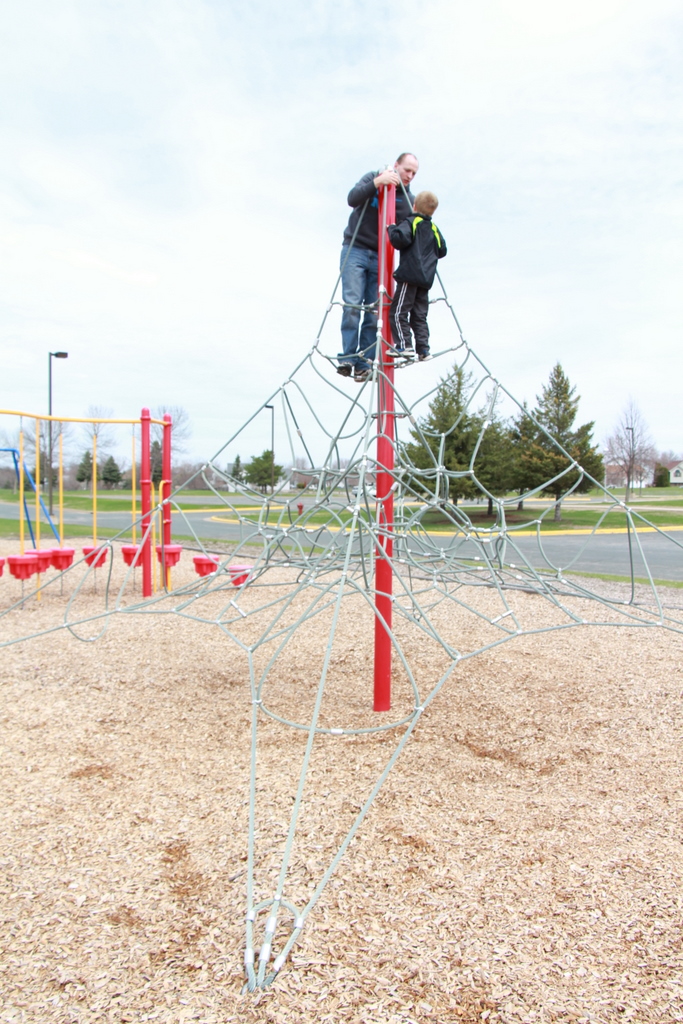 I didn’t get Tim calming him down but I did get Michael taking a brave step back down.  What I am proud of most was seeing Michael make the choice to be brave and overcome a swell of fear that just a year ago would have controlled him. 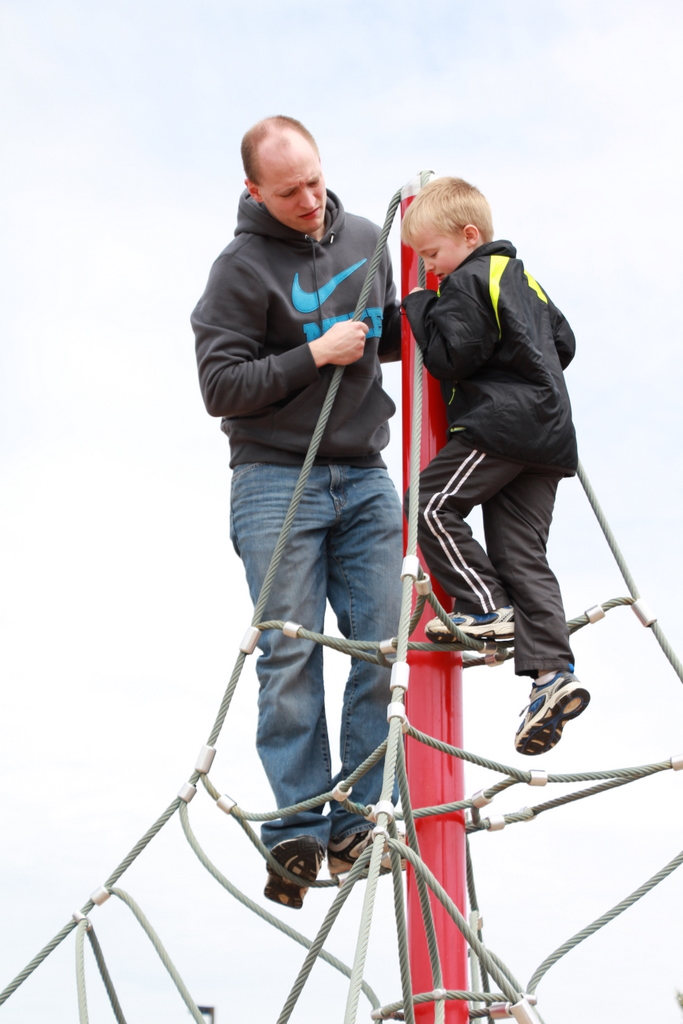 Again. Not the most flattering photo of Michael but here he is looking fear in the eye. A year ago he wouldn’t look into the camera lens. Plus look at the bokeh (the blurry background) while Michael is still in focus. Win! 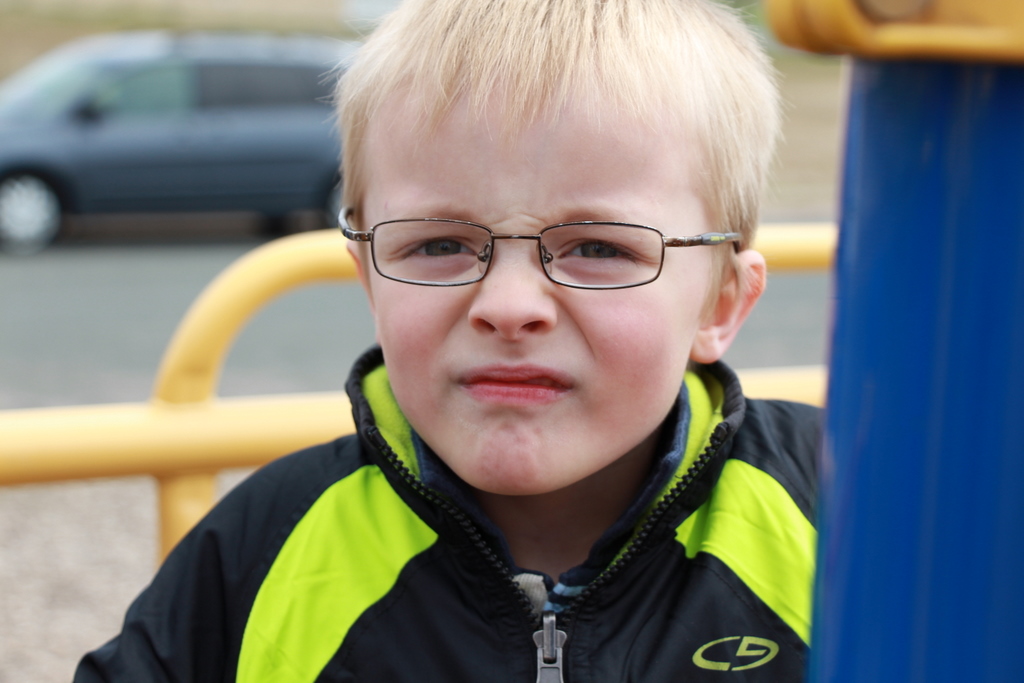 I will post a few more of my favorites tomorrow. For now you can find many more photos from today’s learning my camera trip to the park here. Some are better than others but before you go look at the 40+ more photos, I will leave you with this one and a shout out to Tim for playing with the kids while I played with my camera. 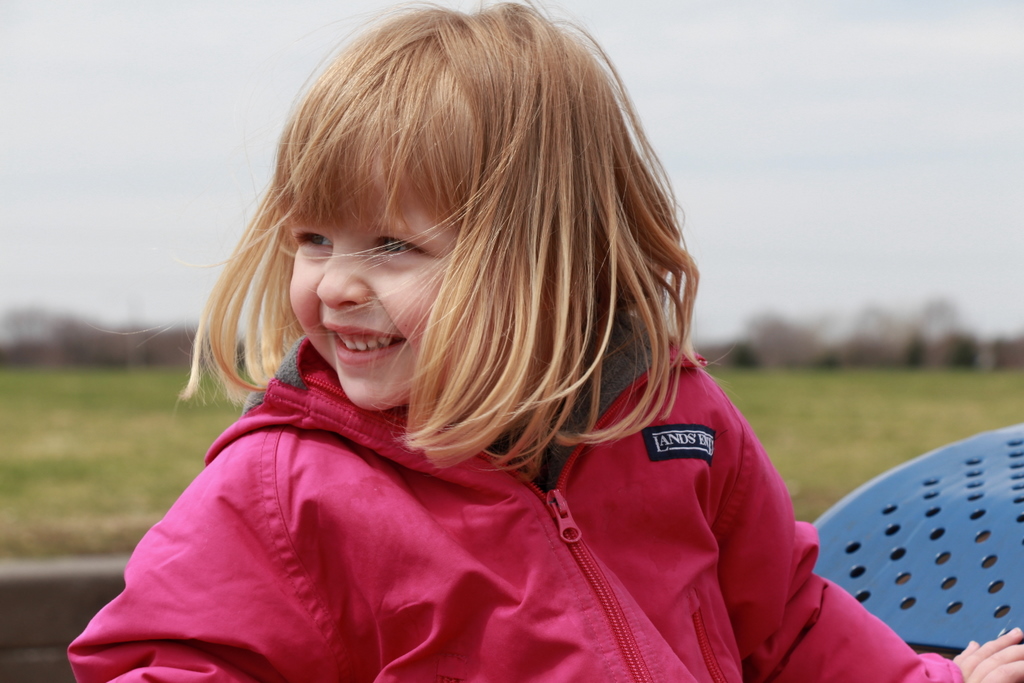 2 thoughts on “Sunday in the Park with my Canon”