The objective: Be the first to cross everything off your list and ring the dinner bell. 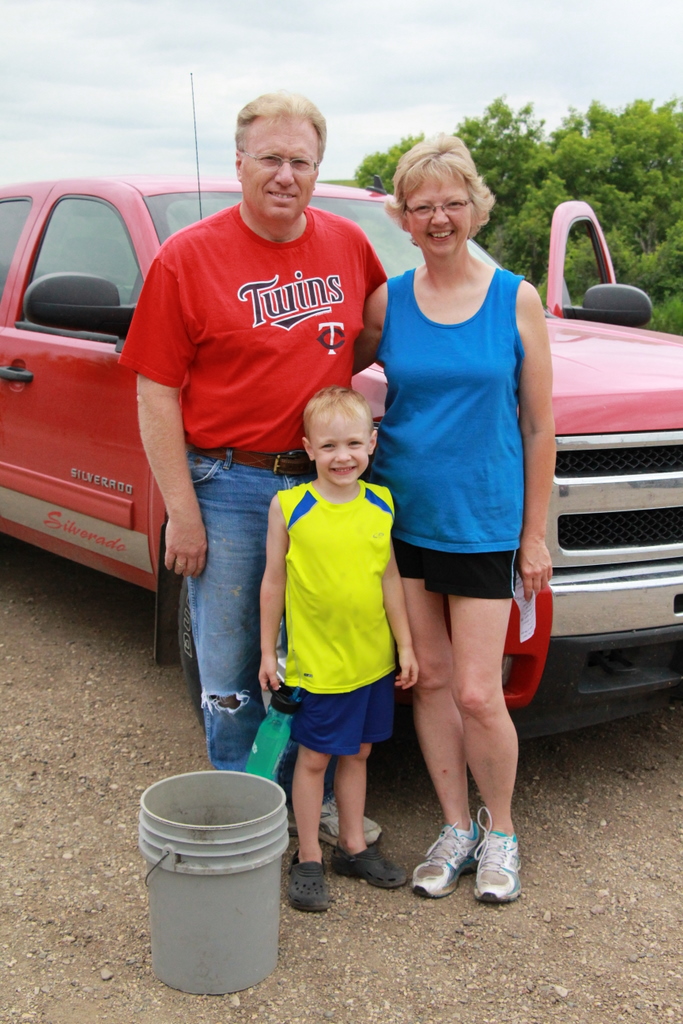 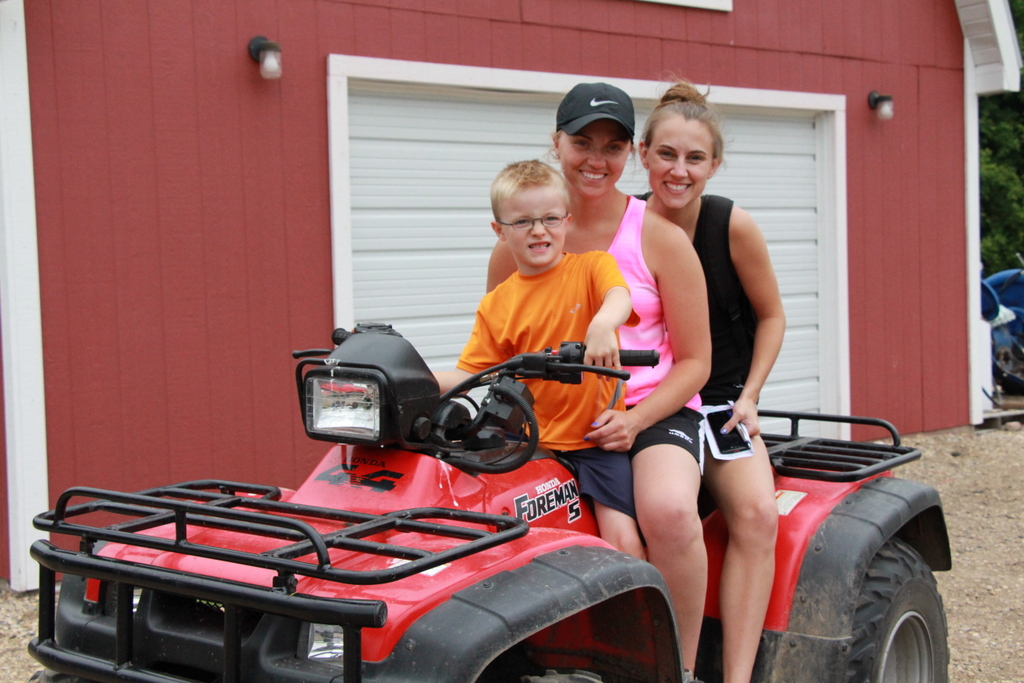 Elise, Tim and I 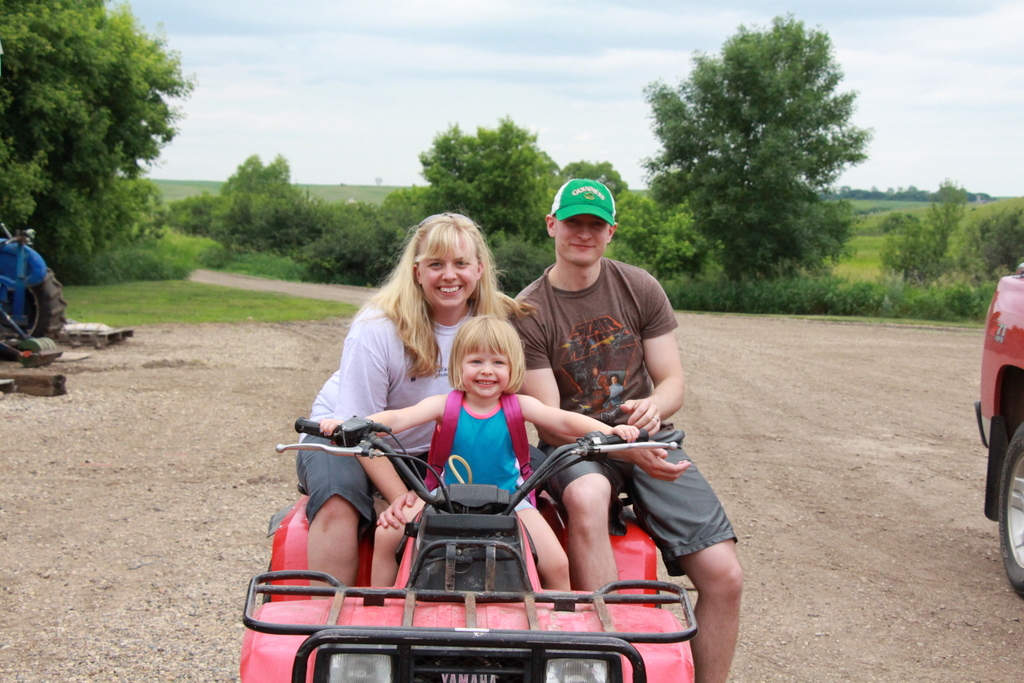 On your Marks. Get Set. GO! 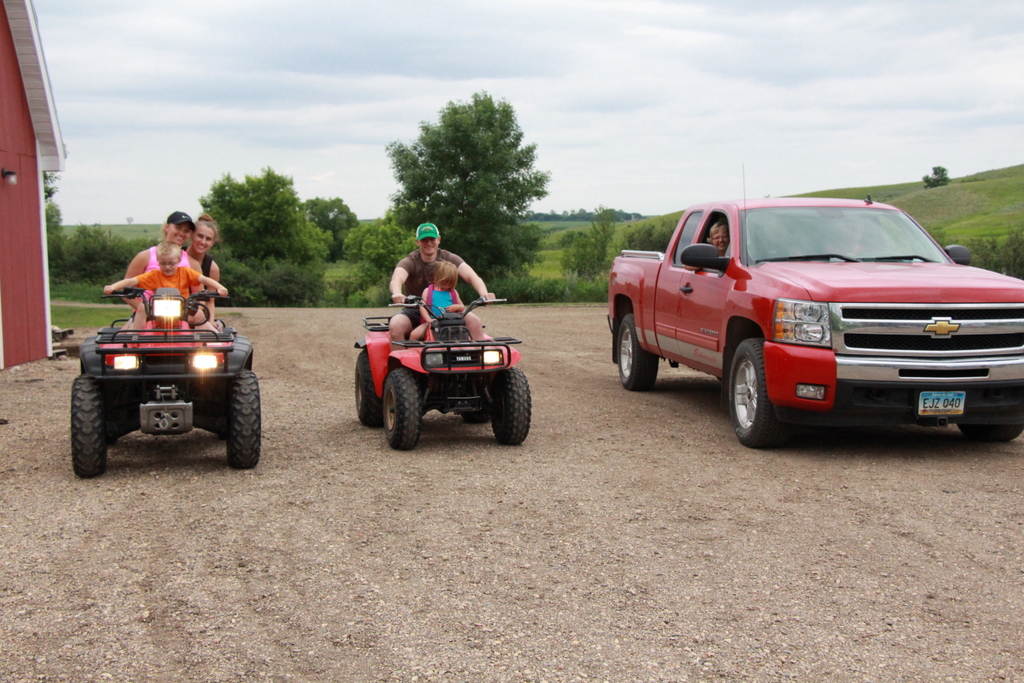 Our team, while still feeling the competitive spirit and showing lots of hustle, took a little more time taking a “pic” of each of the stops on the list. In fact I would go as far to say that we took photos not pics. 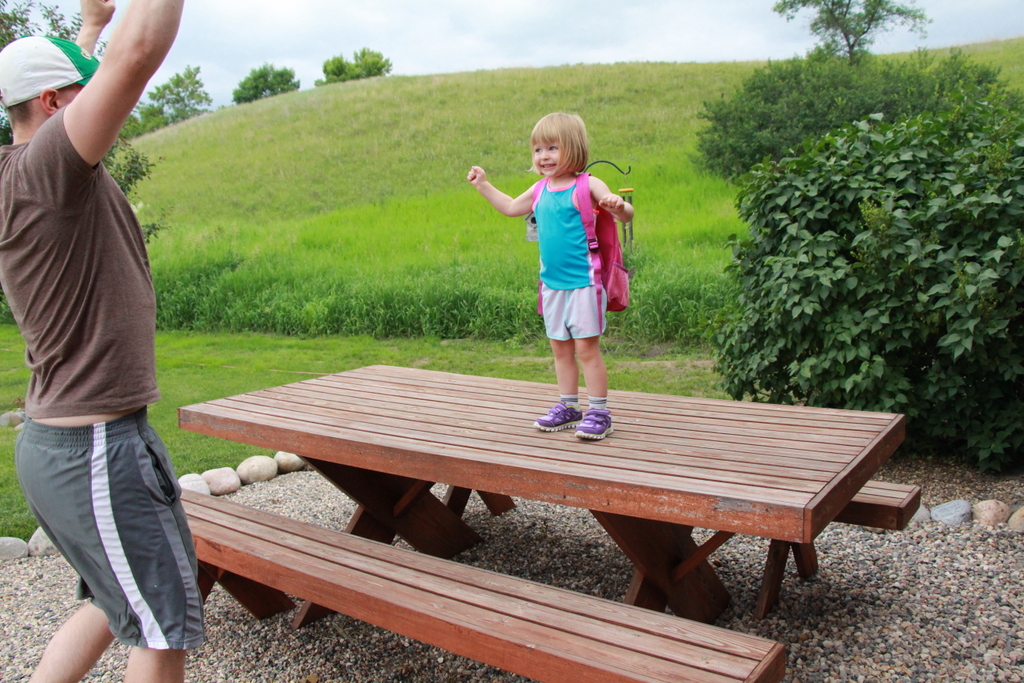 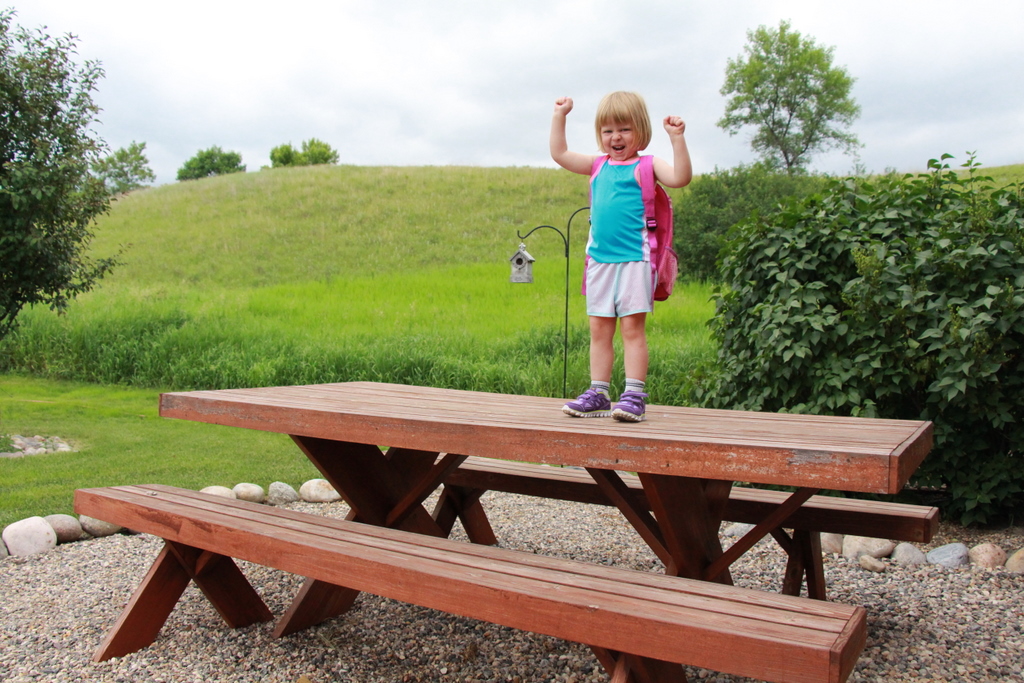 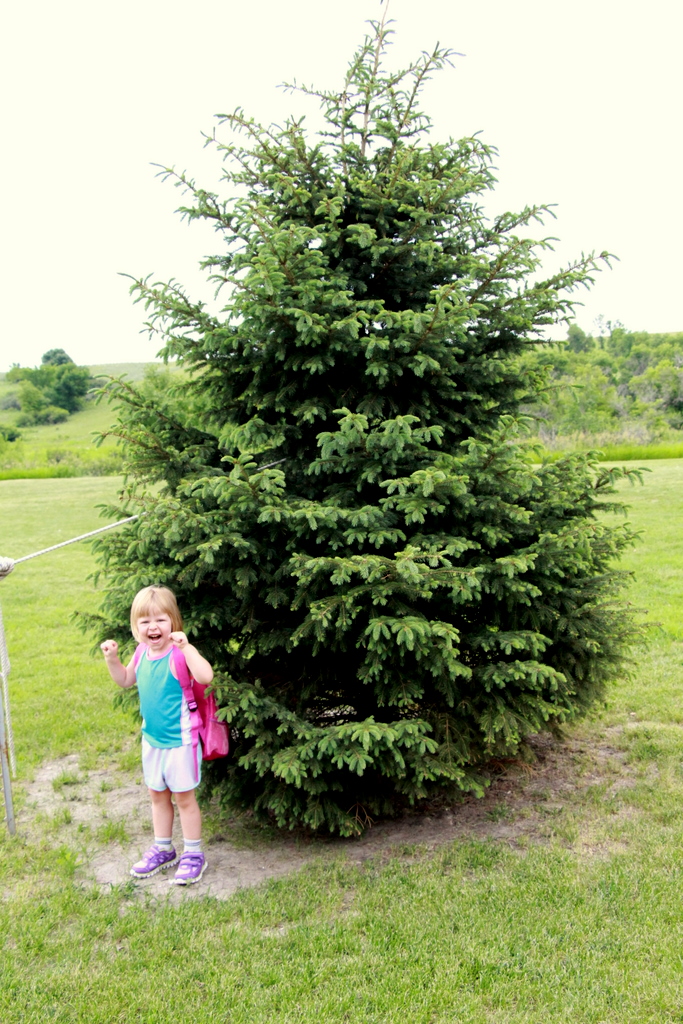 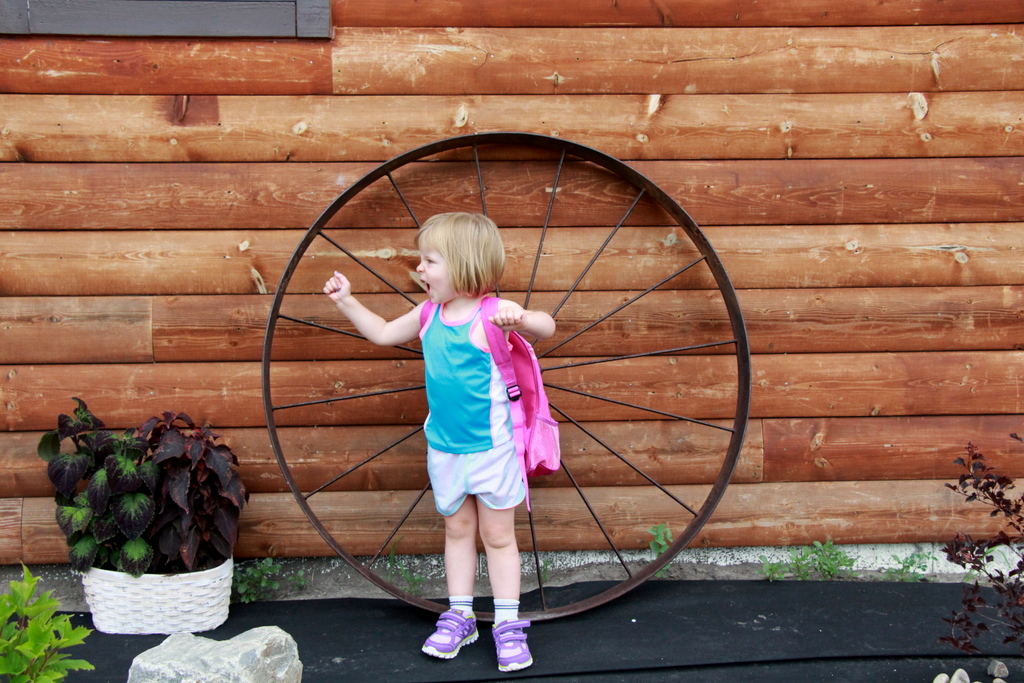 This racing is tough work! Tim gets total credit for this photo. She needed a break (It was ridiculously hot and humid) so I picked the flowers while she cooled off. 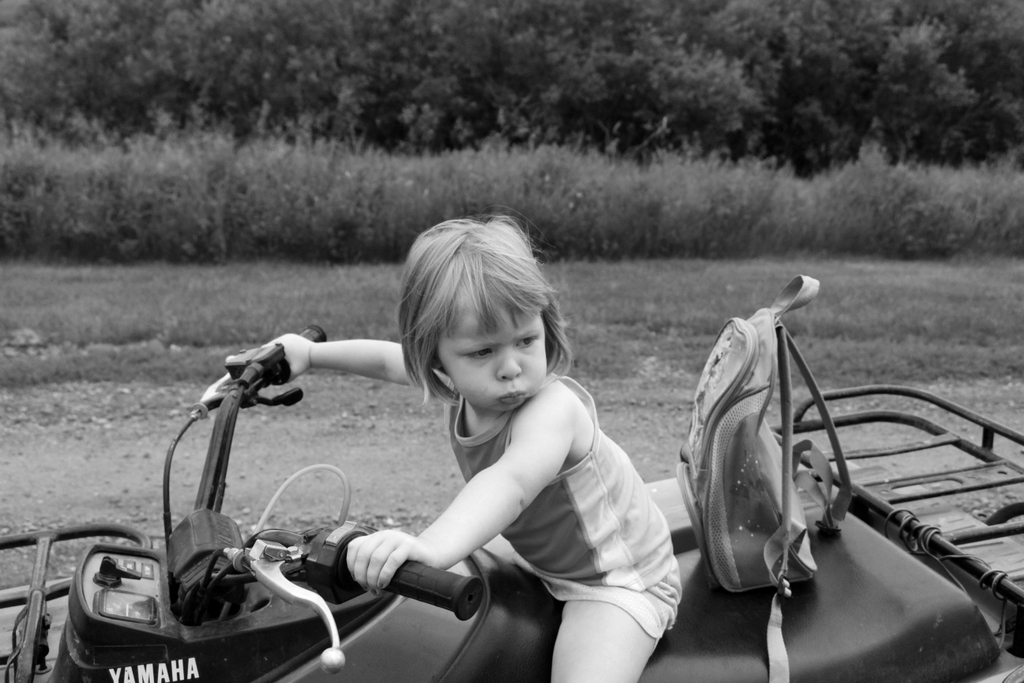 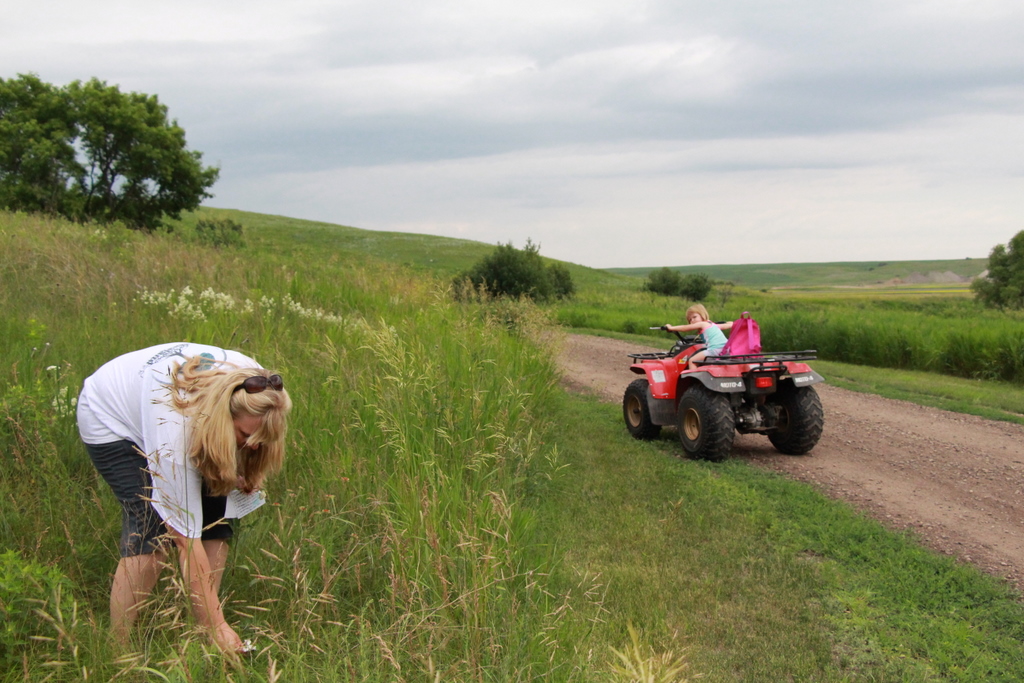 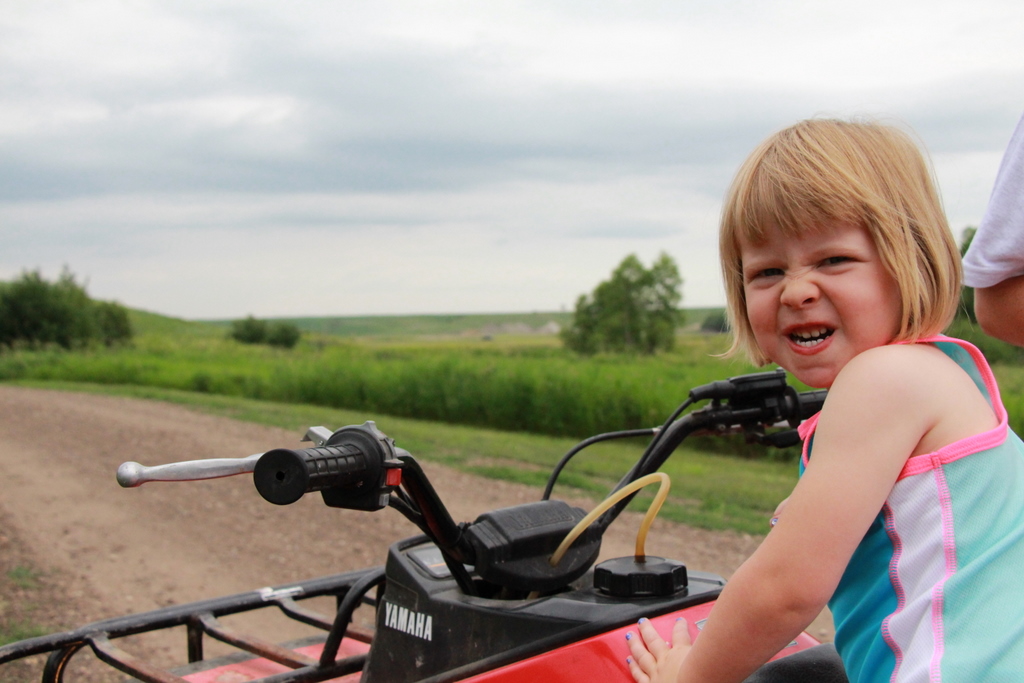 Not quite halfway there. 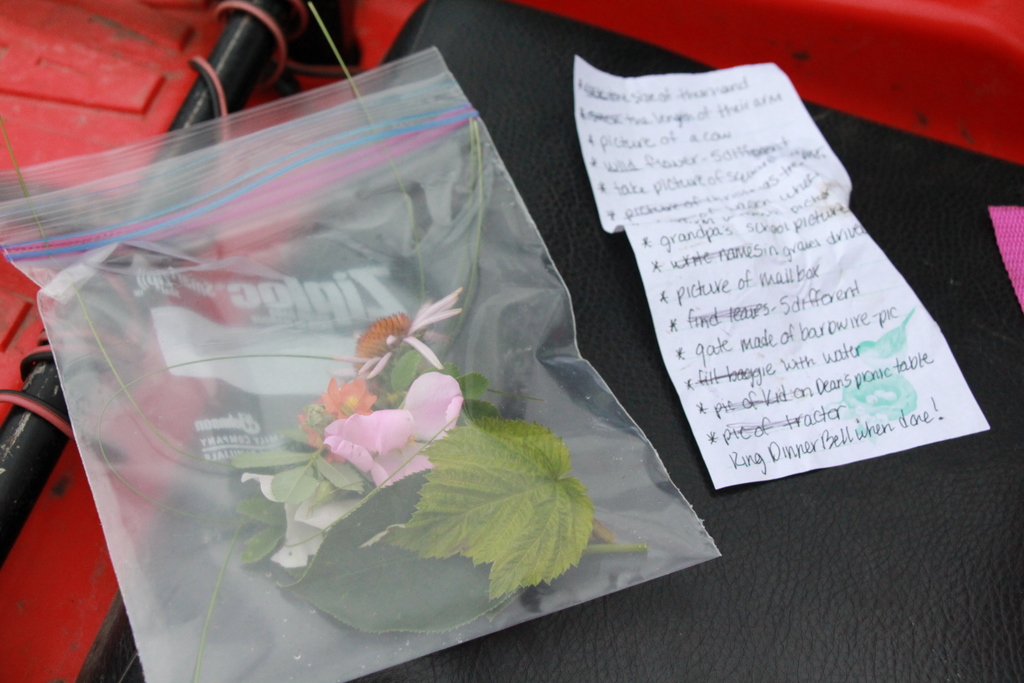 Our teams strategy was to do all the stuff we could around the cabin first and then hit the dirt roads to get the things that were farther away. We thought we were pretty clever… and then this…

yeah. We were not thinking ahead because the..

is located behind the barbwire fence and that gate is a bitch.

This is the scene we raced to catch up to. Notice the truck (Patrick, Nama and Papa) and the other 4weeler (Michael, Ashley and Beth) were already at the gate. I told Tim to floor it because I knew if we got stuck with the gate we were screwed. 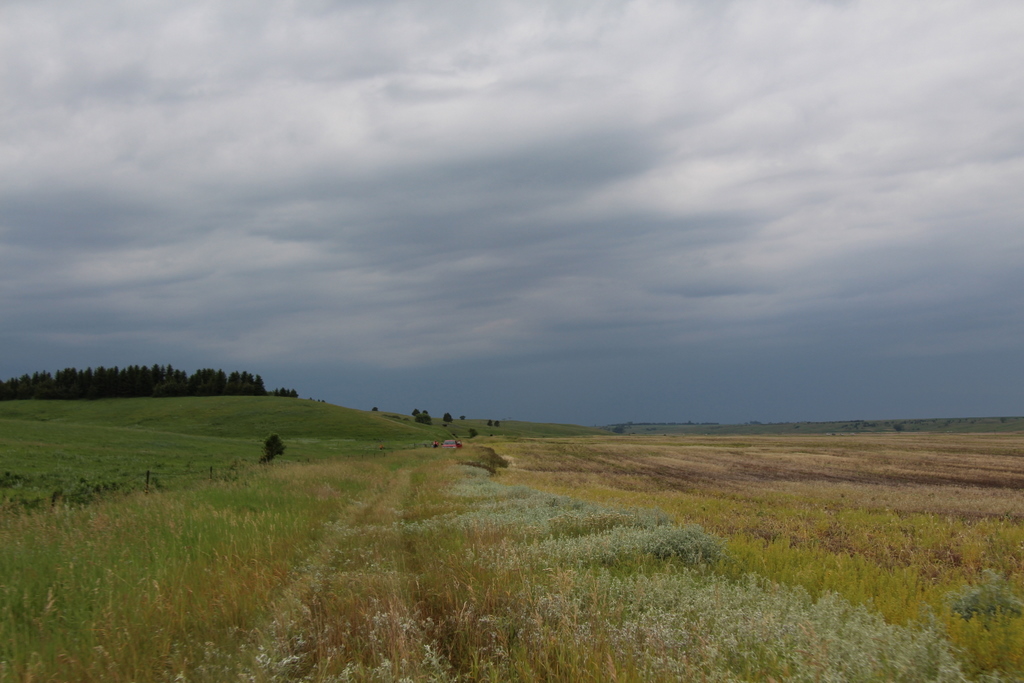 Here is team Patrick feeling smug and laughing above the roar of the 4wheeler and truck engine. 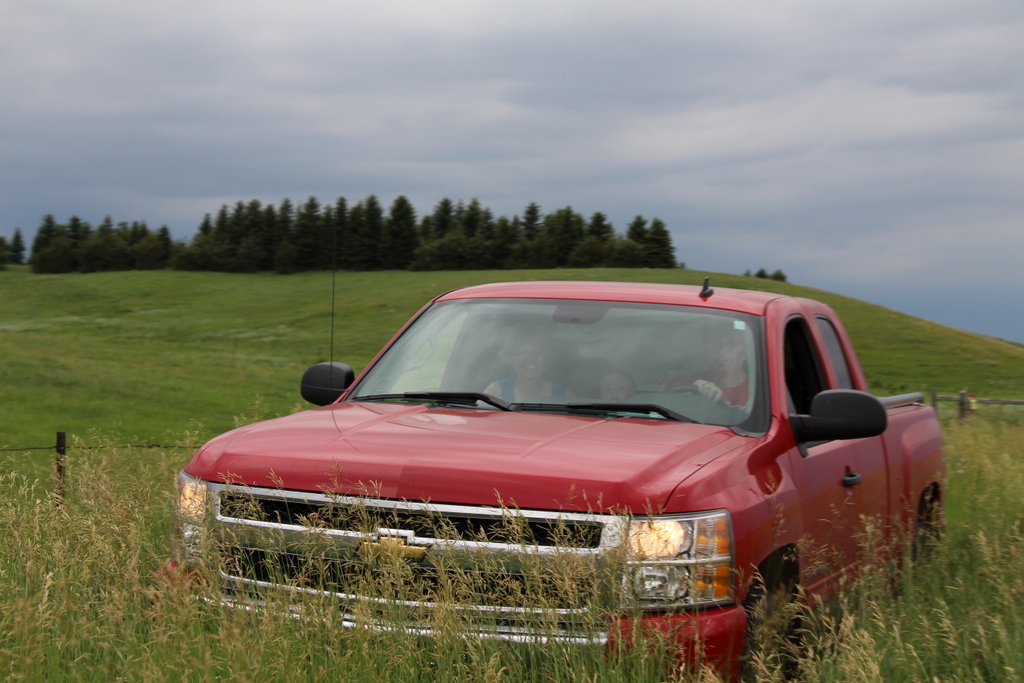 They didn’t stop as they passed us, they only slowed down enough for my Dad to shout, “MAKE SURE YOU CLOSE THE GATE!” 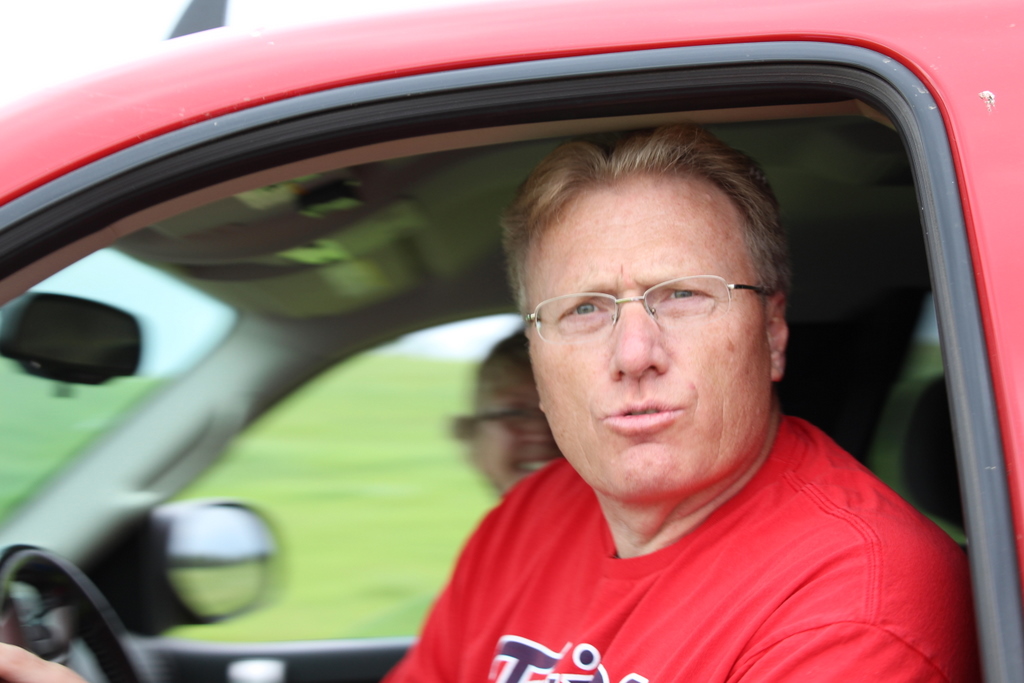 That is his, “I mean business face – notice my mom laughing in the background.

Elise braved the grass long enough to stand miserably for this photo. This was a mistake because we could have caught Team Michael if we would have waited to take this photo until after we got the windmill pic. 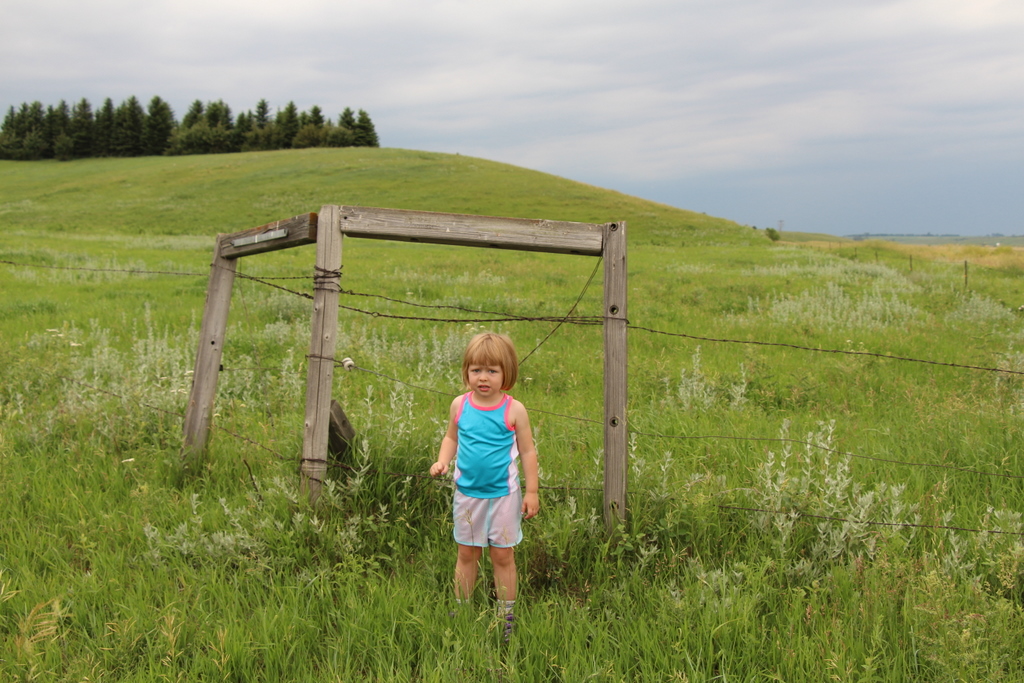 They shouted the same thing to us that my Dad did while cruising by us. Beth knew just as well as I did that the gate would make or break a team. Can you tell which teams were in it to win it?! 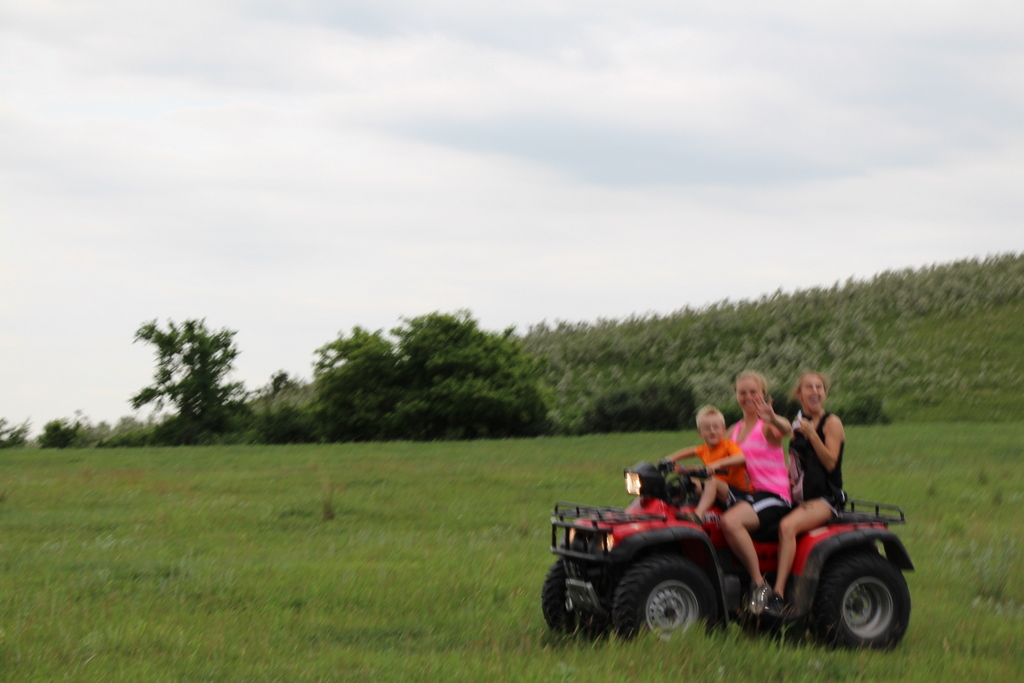 We quick snapped a few photos at the old windmill and I hopped back on the 4wheeler knowing that the gate was going to be our team’s demise…. 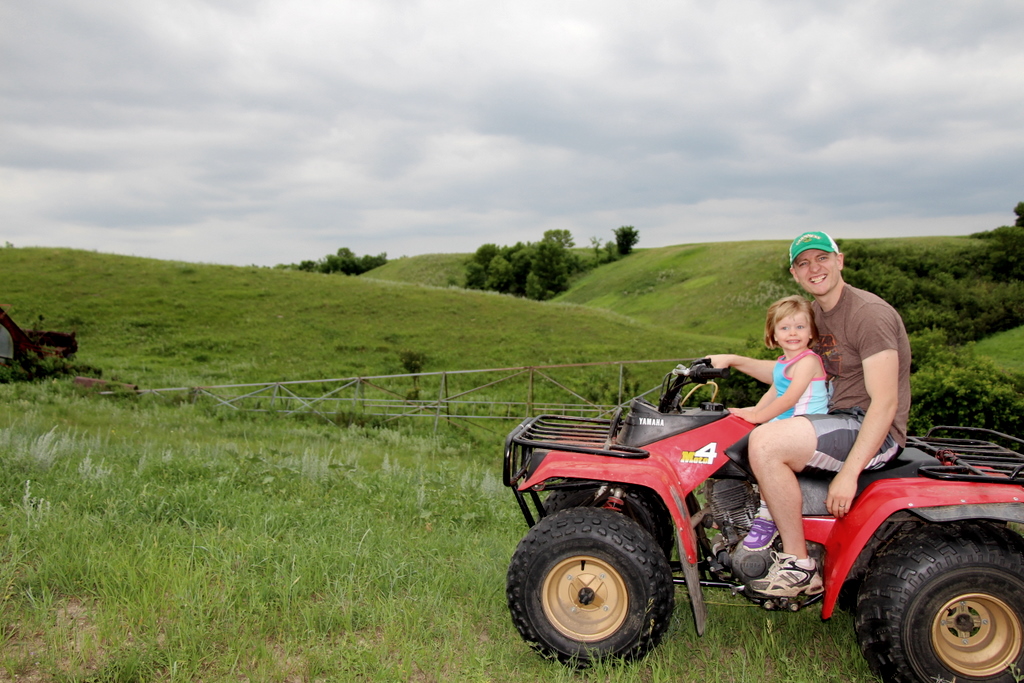 And it was. The windmill is where we lost the game. At least the photo turned out cute. 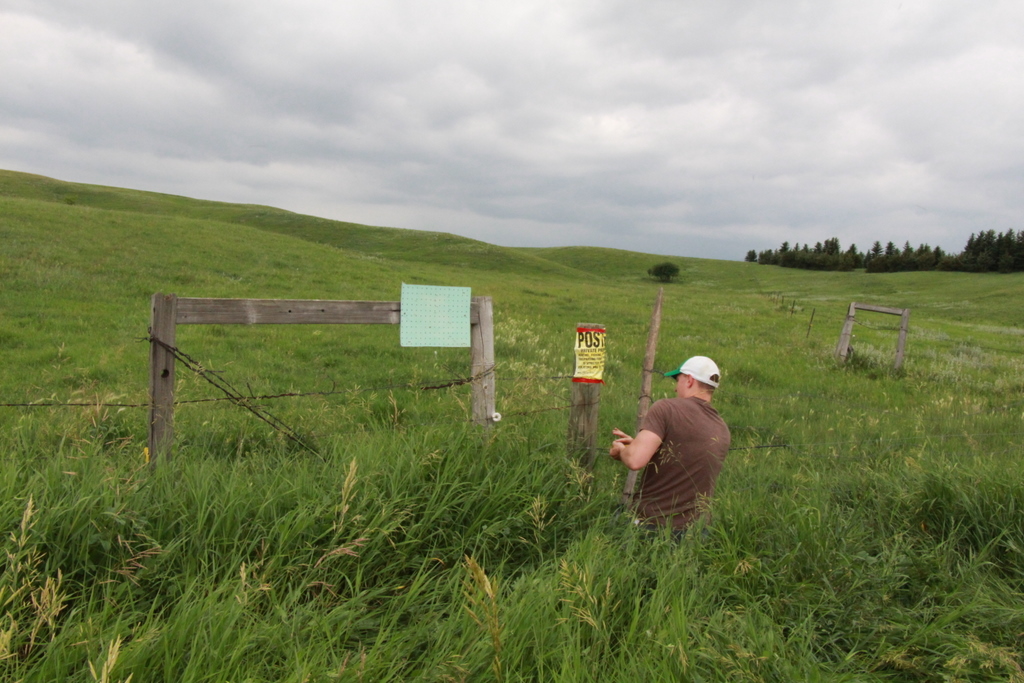 Admittedly, I took a good half-dozen photos of Tim trying to close the stupid gate before I climbed off the 4wheeler to help. We got it closed after a good 10 minutes of cursing farmers and their inefficient gates. We got it closed but not correctly. In the end my Dad had to go back and fix our botched job.

The humidity was horrible and we could hear distant rumblings of thunder coming our way, so to avoid getting drenched on the final leg of our scavenger hunt, we sped up our photo taking process for the last few stops.

No kiddo in this pic. 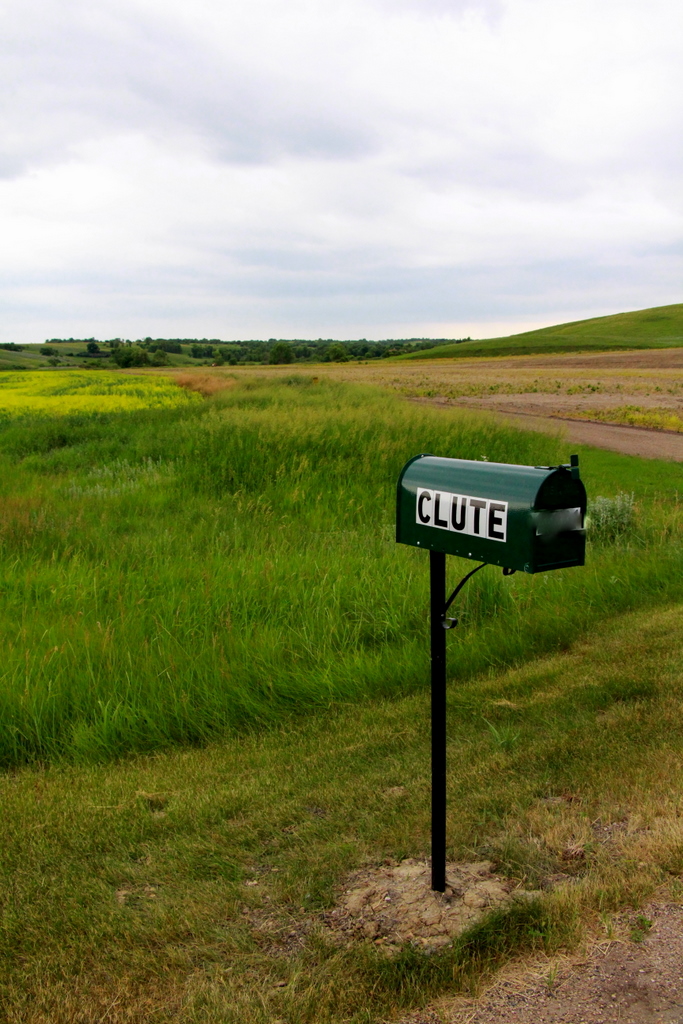 Notice the white building in the far distance? That is the school-house my Grandpa attended as a child. We cheated by using my awesome zoom on my camera instead of driving all the way out to the school. 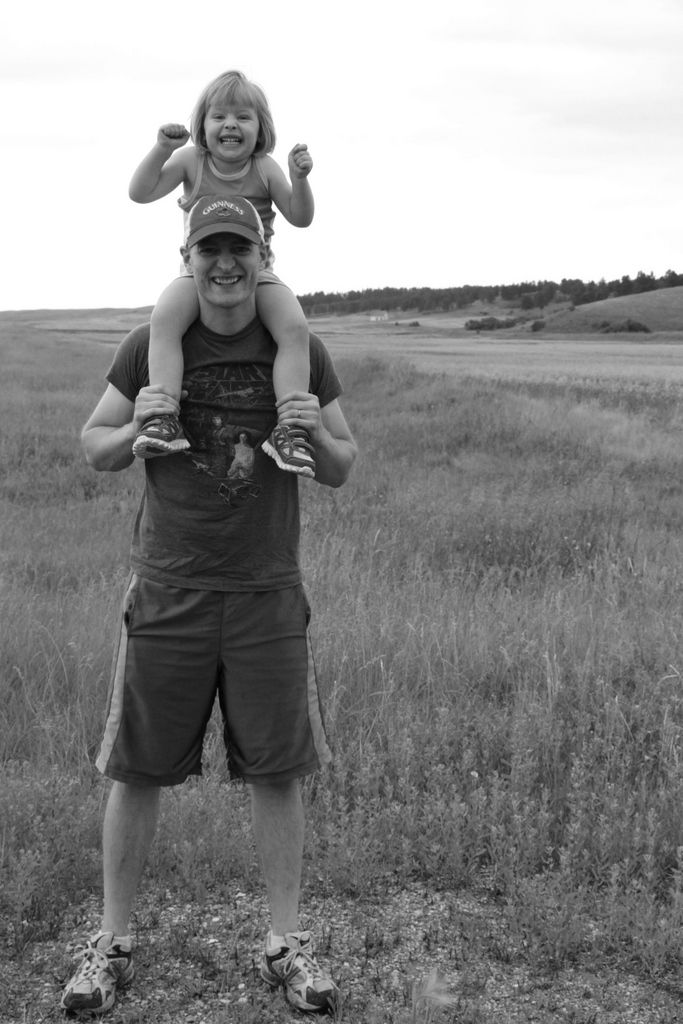 I had to crank up the ISO to compensate for the zoom/shaky hands, but I am happy with how this shot turned out. 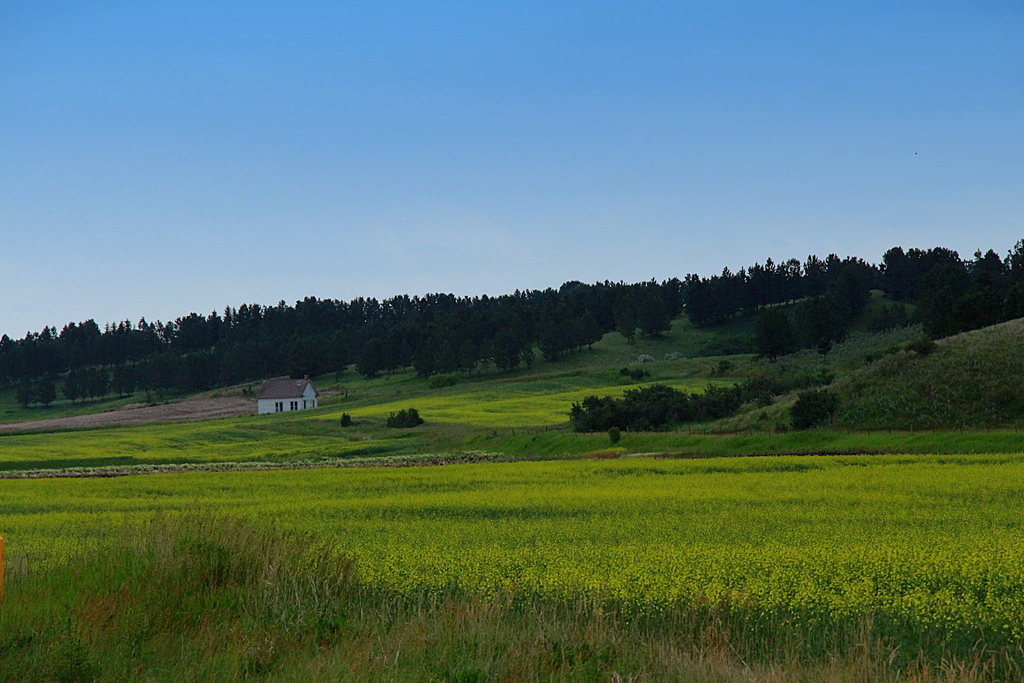 We only had one thing left on our list. Cows. I wouldn’t call this cheating, I like to think of it as creative problem solving. You see the closest cows would have been at least another couple of miles on the 4wheeler and the storm was closing in so…. 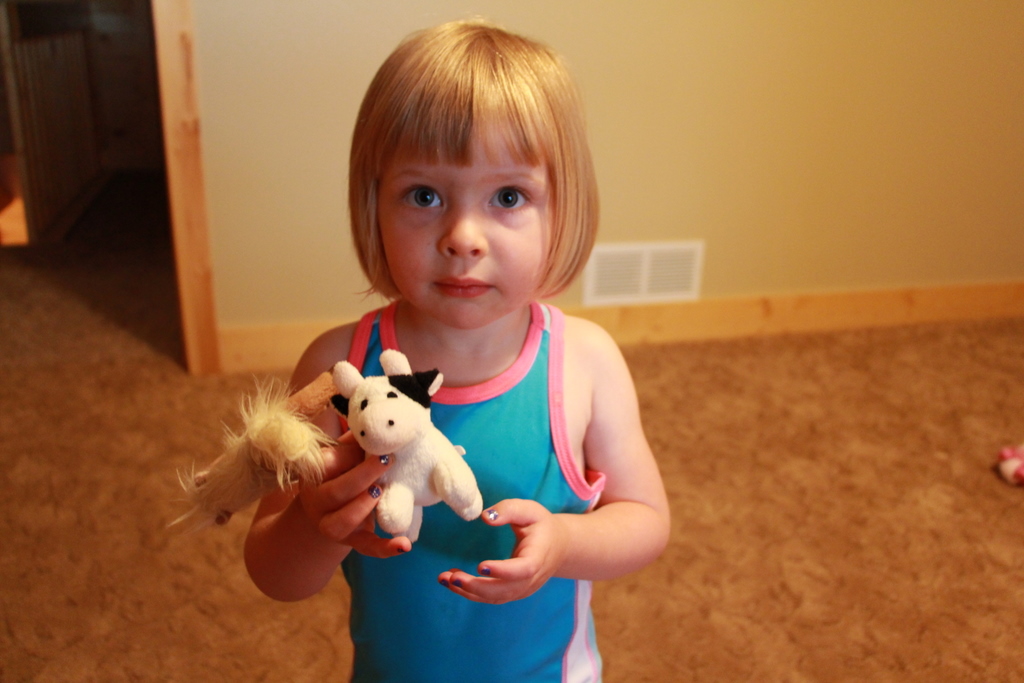 The other teams had long been done. They finished so far ahead of us that they had enough time to go and fix our botched gate job, have a drink and a snack. We still wrung the dinner bell and Elise still shouted, “WINNER!” 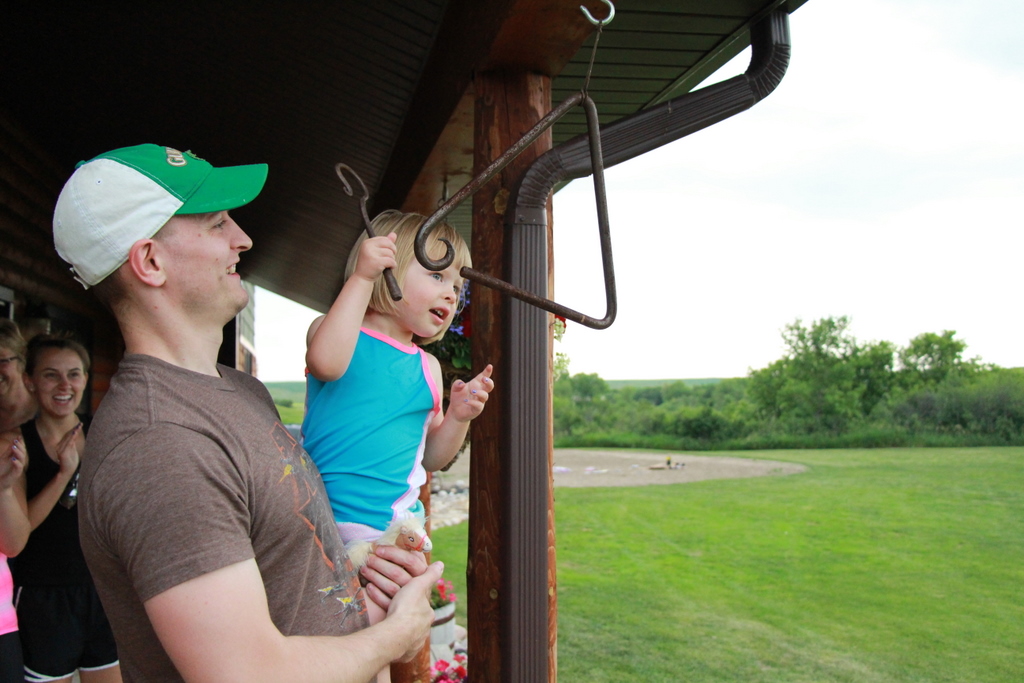 The preliminary results of the First of Many Scavenger Hunts were this:

However, when it came time to review the winner’s stash of proof they came up short. My mom still claims they stopped at the mailbox, but there was no picture proof so they were disqualified. That is right, we are hard-core. Just watch my family play a game of cards and you know how seriously we take our game, “A card laid is a card played!”

So the winning team was: 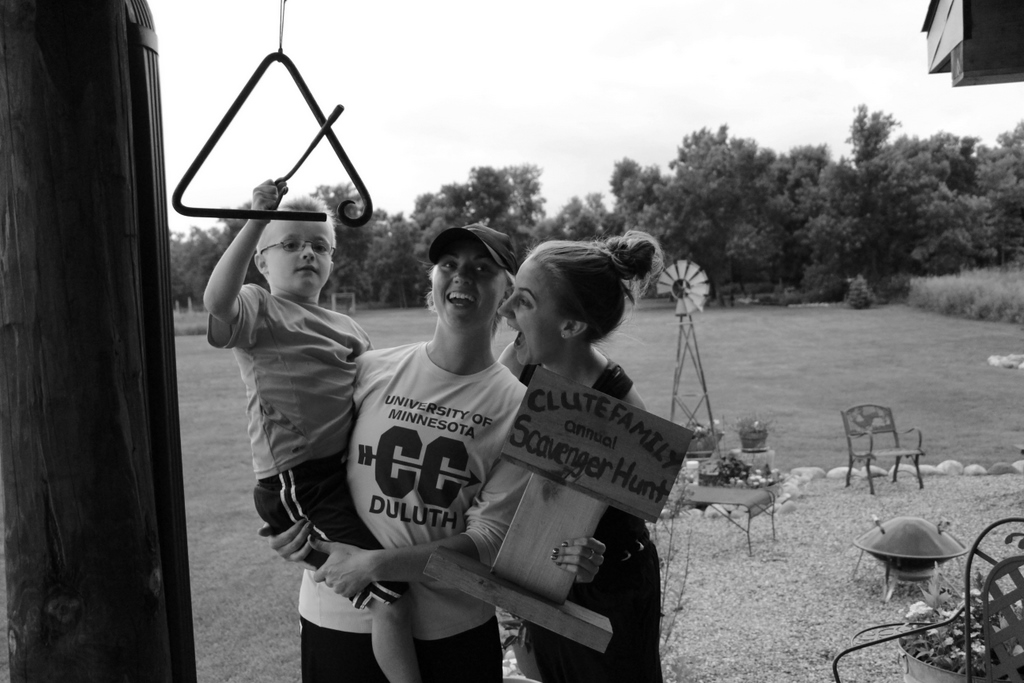 Did I forget to mention that I made a trophy while everyone else rested up pre-scavenger hunt? Well I did and it is awesome. 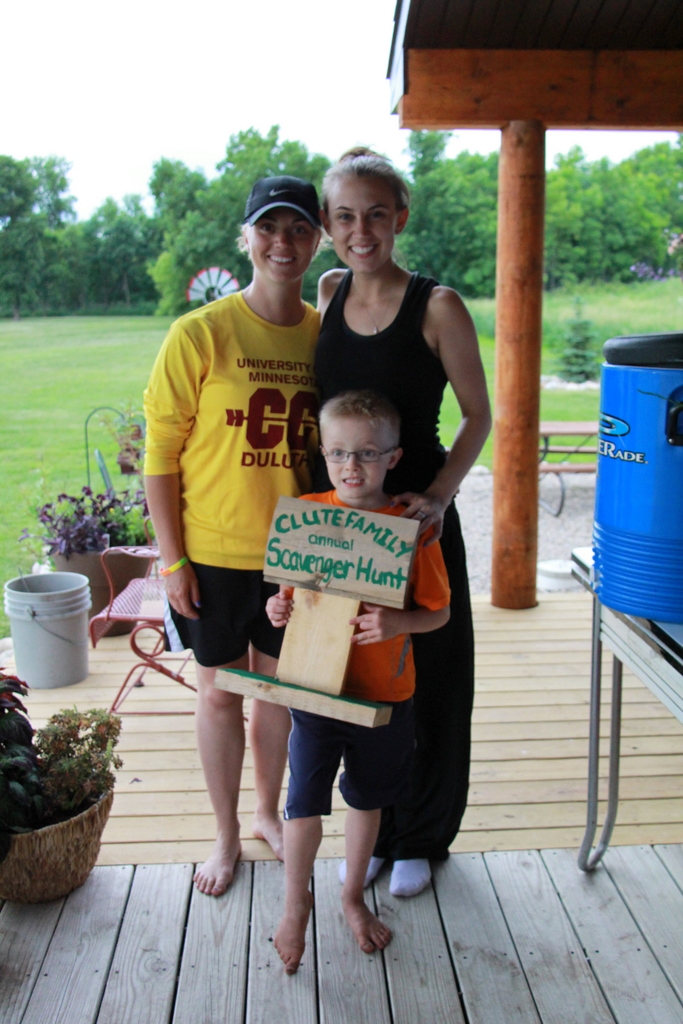 From what it sounds like there was quite a foot race at the end between the first two finishing teams. It would have been fun to see that but we enjoyed out photo scavenger hunt at a slow and steady pace. The turtle lost this race but next year we are coming back with smarter strategy in order to keep up with the hares! 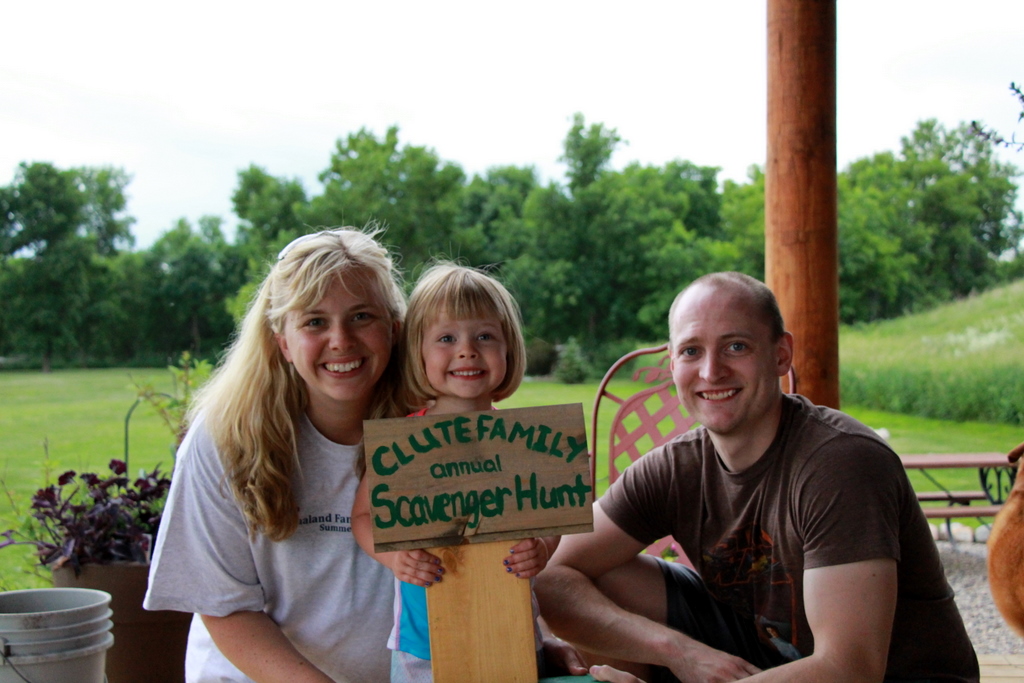 My goodness look at that hair. I flat ironed it that morning but the humidity was so bad that my hair poofed out and started to look like fluffy cocker spaniel ears. Uffda. Oh well. The scavenger hunt was a hit, and even the men had a good time. I hope this is the first of many.

We will take this photo again next year as victors and with my hair pulled back into a pony!!