Astrid lived with us for a week before we introduced her to Lucy.

We followed all the steps as instructed by this post on paws.org, and I was feeling pretty good about the meeting because the cat and dog had been eating meals on opposite sides of a baby gate that they couldn’t see through (our make shift “feed them on opposite sides of a door). We had kept the cat confined to one area of the house and after a week they got to switch areas so they could get used to each other’s smells.

Then we did the first meet and greet.

That isn’t how it went down.

Lucy was happily getting treats and a rubdown from me as Tim brought the cat in. Lucy continued to sit and love all the attention as the cat froze and watched Lucy. Lucy looked over at Tim to see what he was up to and then and only then did she realize we had a cat in the house.

Our golden retriever mutt has the worst predator instincts ever. She was shocked by the presence of the cat and immediately growled and barked. The cat hissed, stood her ground and Lucy barked some more.

All that work introducing the cat smells to the dog and she didn’t realize that anything was different in the house.

We did a few more meetings on opposite sides of the baby gate without the cardboard visual barrier. Astrid was getting more comfortable but Lucy was starting to act even stranger than normal. Whenever the cat got close to her side of the baby gate Lucy would turn her back to the cat and refuse to look at her. When I would turn her around she would bow her head and refuse to look that cat in the eye. I am pretty sure my 74 lbs mutt was showing submissiveness to our 9 week old kitten.

Our dog is broke.

It took a few more meetings like that before we got to this point. Astrid was in the office with us when Lucy walked in. They tolerated each other to the point that Lucy was starting to turn from submissive to interested. 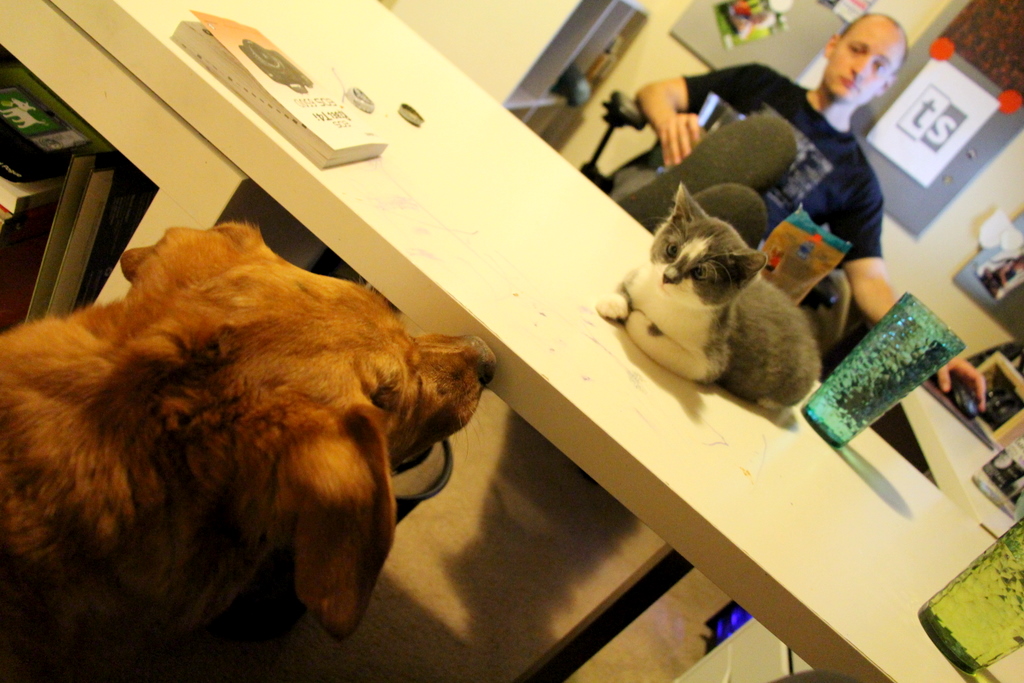 She started actually looking Astrid in the eye. My brave brave Lucy. 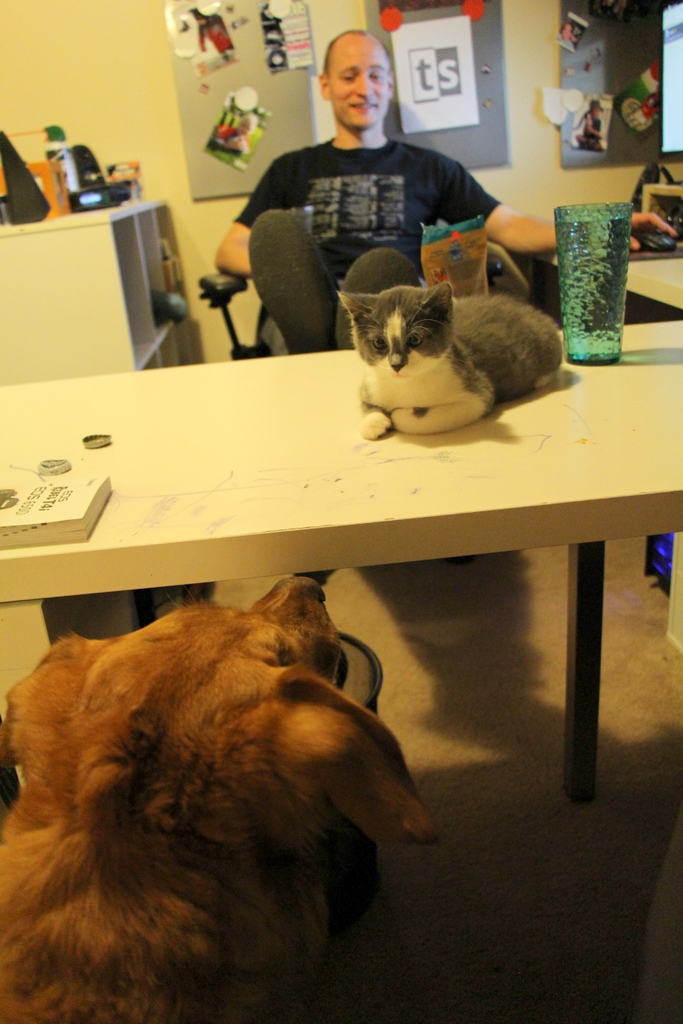 When Lucy went in for a close up smell, Astrid hissed and swatted Lucy. 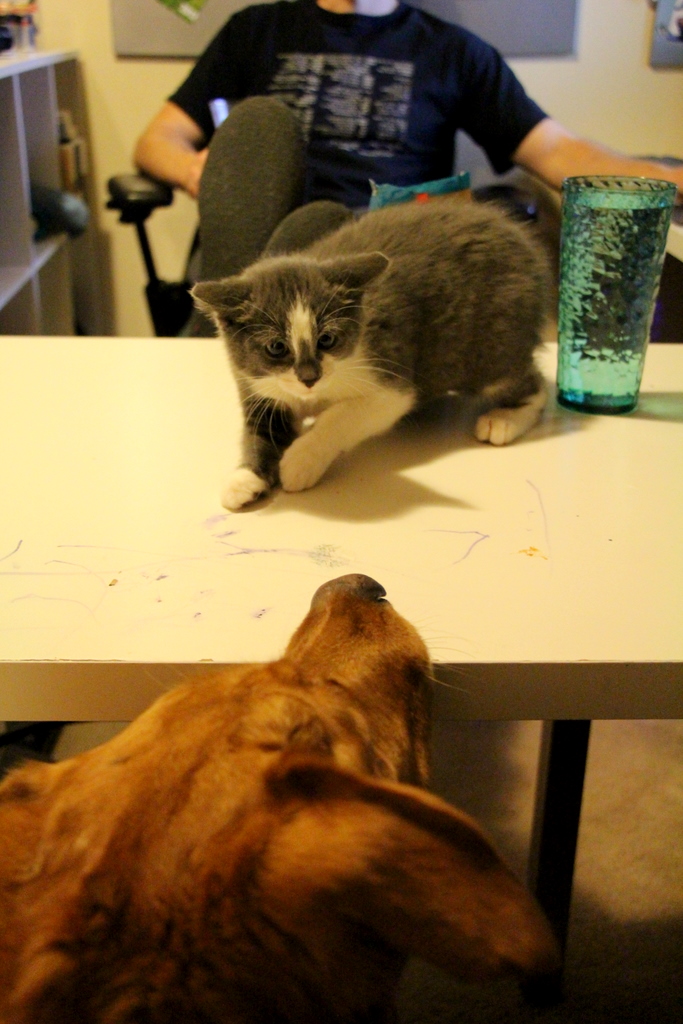 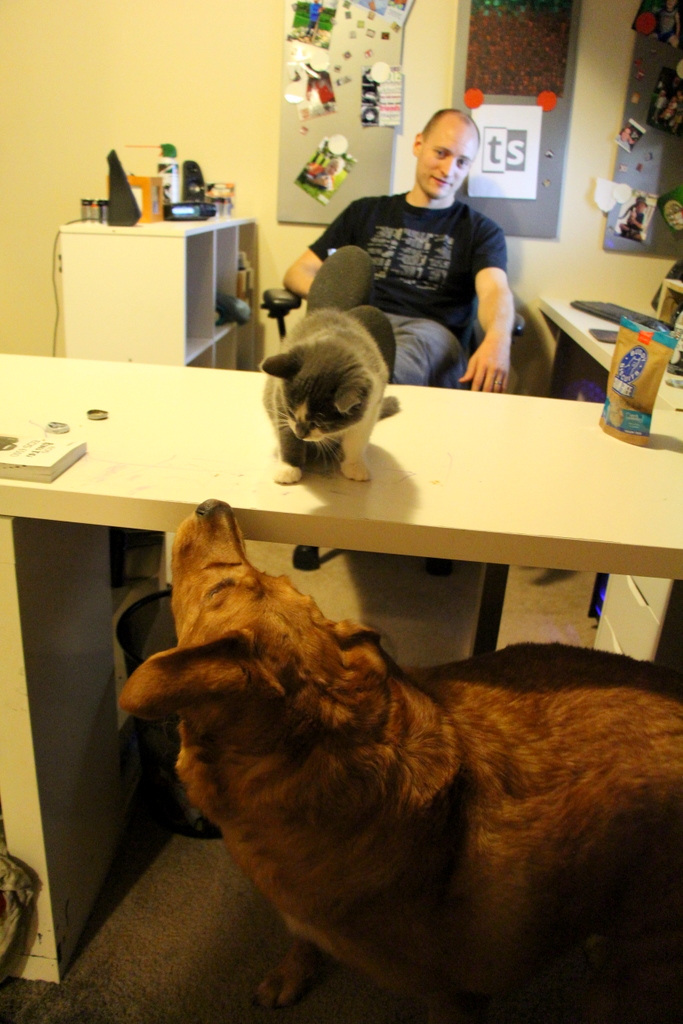 Just like cleaning with a house full of young kids, it’s one step forward two steps back.

An hour or so later Lucy was zonked out on the couch next to me (a day of meet and greet with a kitten can be exhausting) and the cat jumped up into Tim’s lap and purred through an entire episode of Entourage. The cat and dog coexisted on the couch together. Lucy was too tired to open her eyes and notice the cat, and Astrid was too attention starved to care that the big dumb dog was snoring a few feet away.

They are far from buddies at this point and I wouldn’t even say they are tolerating each other but Lucy has taken back the dominate roll and Astrid is often chased back into her gated area of the house. That cat is free to roam and we have the baby gates positioned just high enough up on the doorways that Astrid can walk under them but Lucy can’t get into Astrid’s area. The baby gates double as a barrier for the kids too so when she has had enough of the kids loving on her she can escape them too. For now it is working.

I am hoping in the coming weeks things slowly transition to a place where they can be in a room and be peaceful.