Patrick is 7 and he had an awesome birthday party! 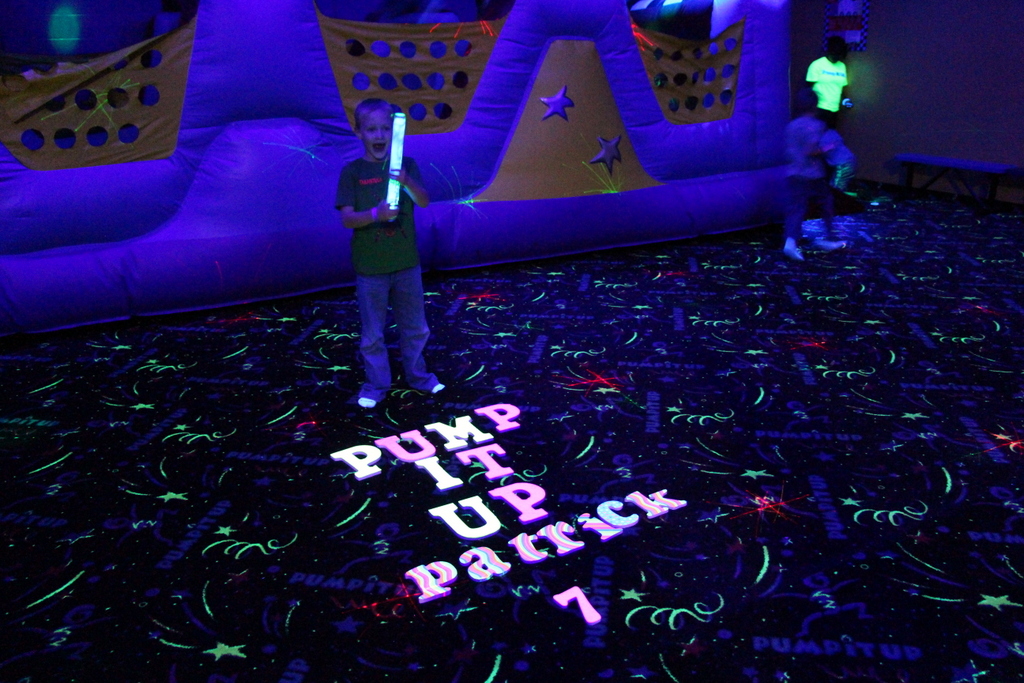 This is his first ever party where we have invited friends. I know. We are horrible parents for not doing this sooner, but the stressed induced migraine I had the morning of the party is the reason we have been putting this off for so long.

When we first started brainstorming the party, I had this elaborate plan of setting up a summer Olympics like event in the backyard with different challenges like filling buckets with squirt guns, obstacle courses, sandcastle challenges, cannon balls in the swimming pool and water balloon “dodge-ball.”

I loved this idea and think it would be so much fun, but to pull it off would have taken a lot of planning, prep and execution and we still had a contractor in our house and a 5 day trip to Minot planned, so we will have to save that idea for another time. Tim was very happy this idea was put on the back burner. I think he would prefer it to be scraped completely!

We decided a home birthday party was not feasible so we started looking for venues. We ended up choosing Sky Zone. For just under $200 we were able to buy a package for 11 people to jump for 1 hour (any more than an hour and we all would have started dropping like flies) we got two pizzas, soda/juice, MIchael got a t-shirt, we had a private room for 40 minutes and Michael got two free passes to jump for an hour at another time. The best part was that there was no pre or post party clean up. Win win all around. 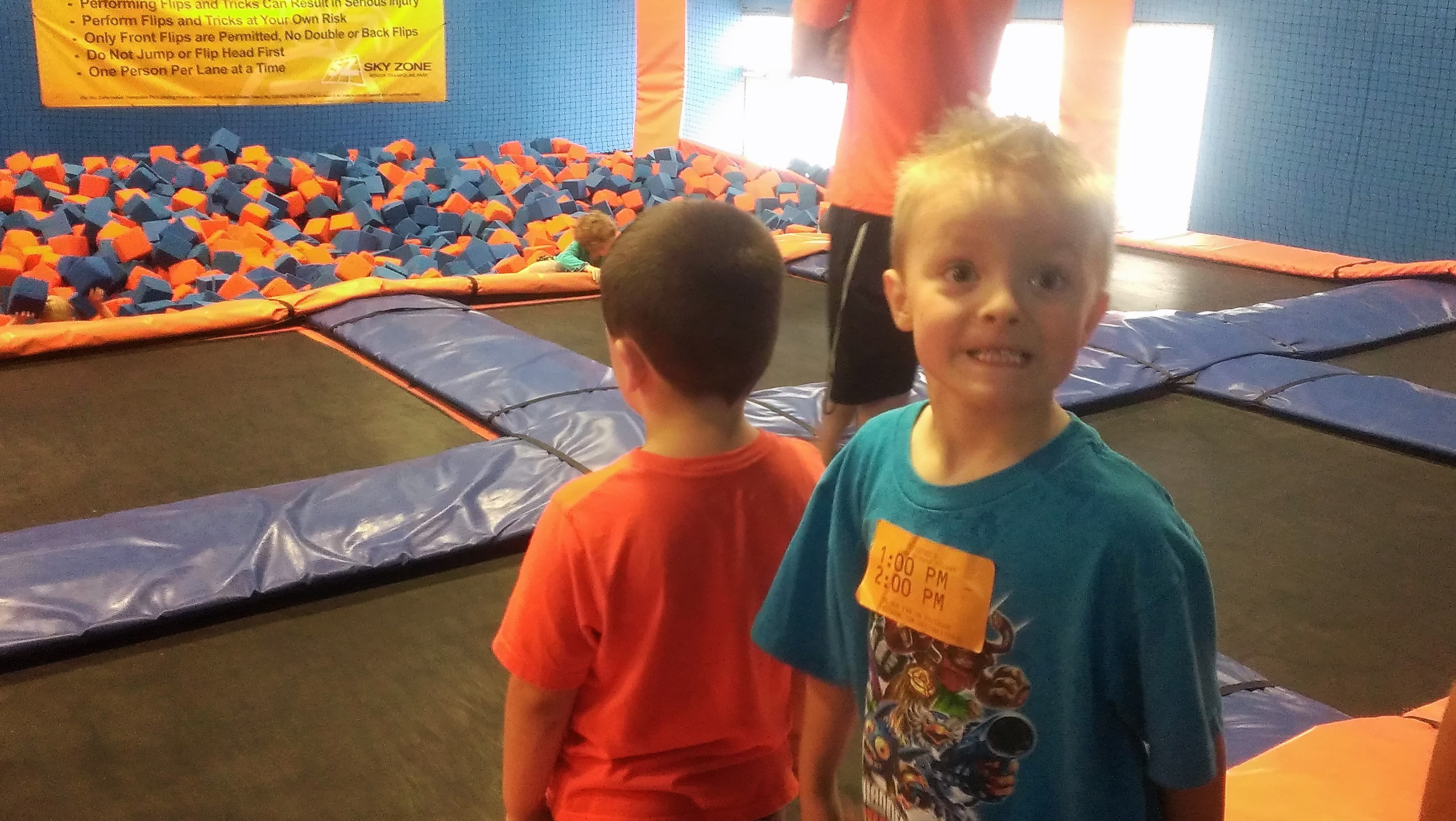 This party was so easy that I don’t know why I was stressed. The guests had an absolute blast and Michael was having “THE BEST DAY EVER!” 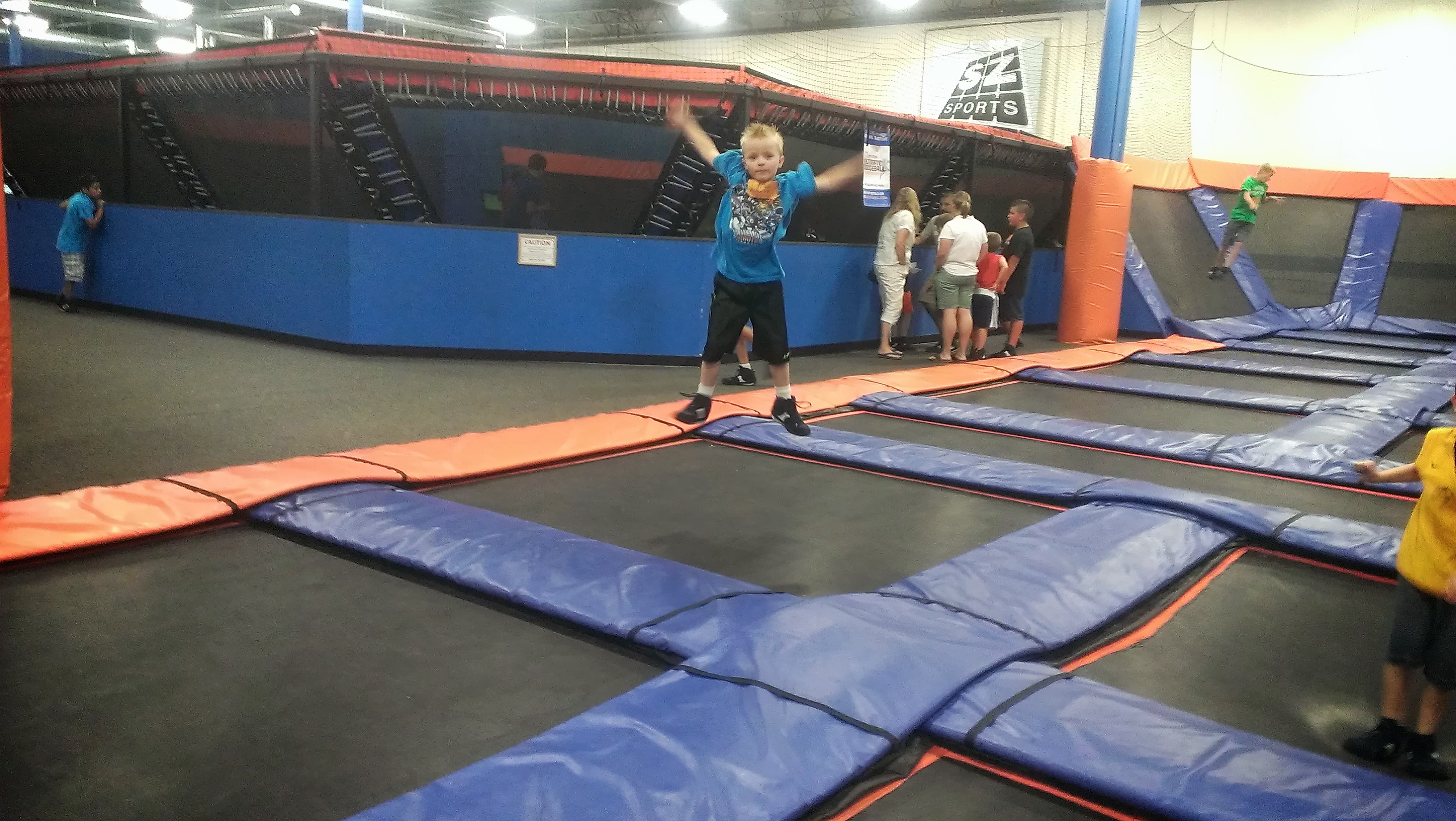 The place was awesome. There were two dodge-ball tramp “courts”, A HUGE area for jumping, a basketball dunking area and then the favorite – the foam pit where kids (and Tim) took turns flipping into a big pit of foam blocks.

I also had big plans of taking awesome photos of the party. Ones where Michael was frozen in the air with a big goofy grin on his face or a photo of Elise bouncing high with her hair straight up in the air or a photo of PJ jumping into the pile of foam blocks with his signature swagger. 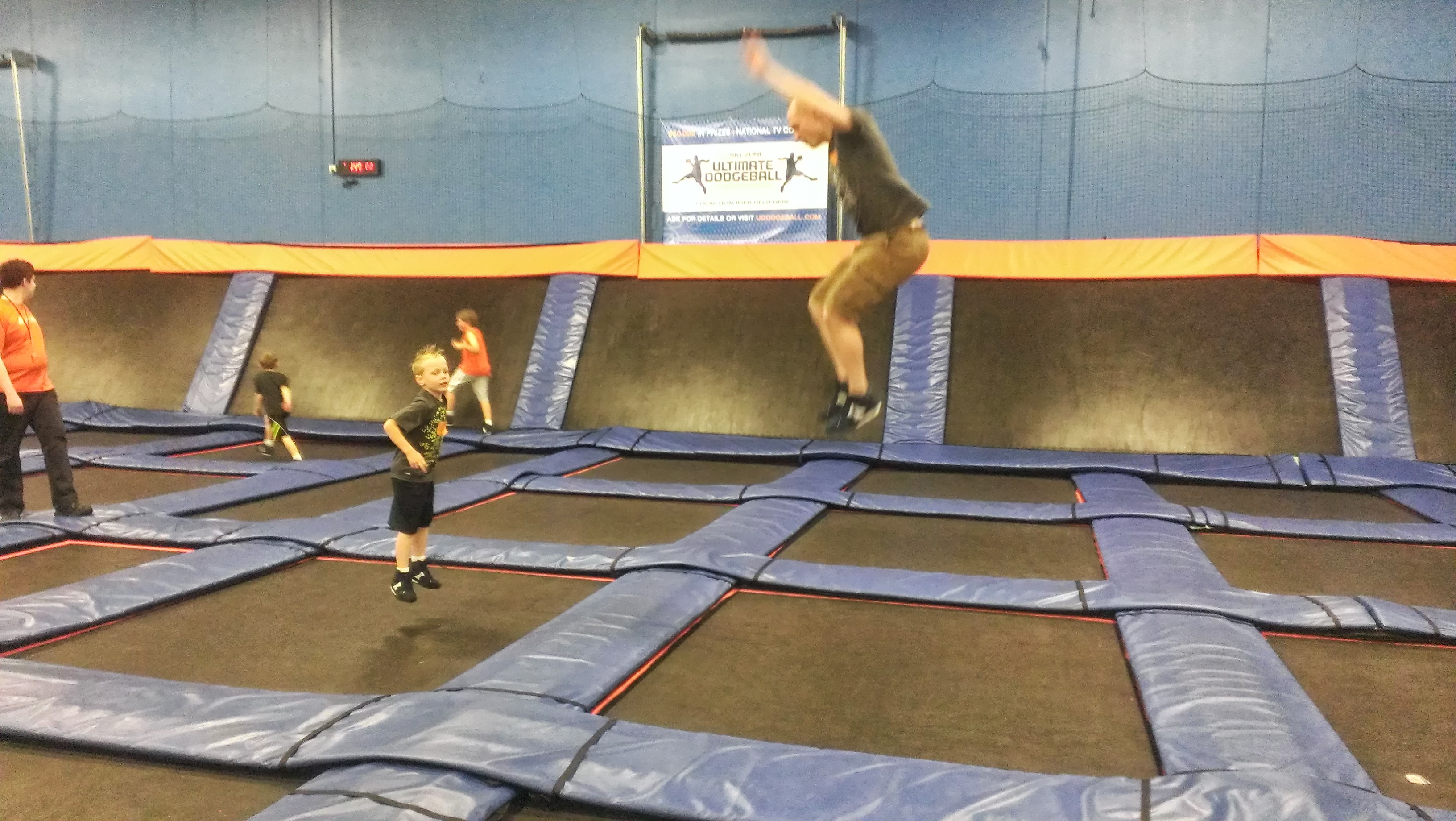 That didn’t happen. I took about 6 photos with my big camera and decided it wasn’t worth it. I wanted Michael and my memories of this party to be of me jumping with him not just taking photos. I took a lot of phone pics instead. All are out of focus but they capture what was going on; movement and lots of fun doing it. 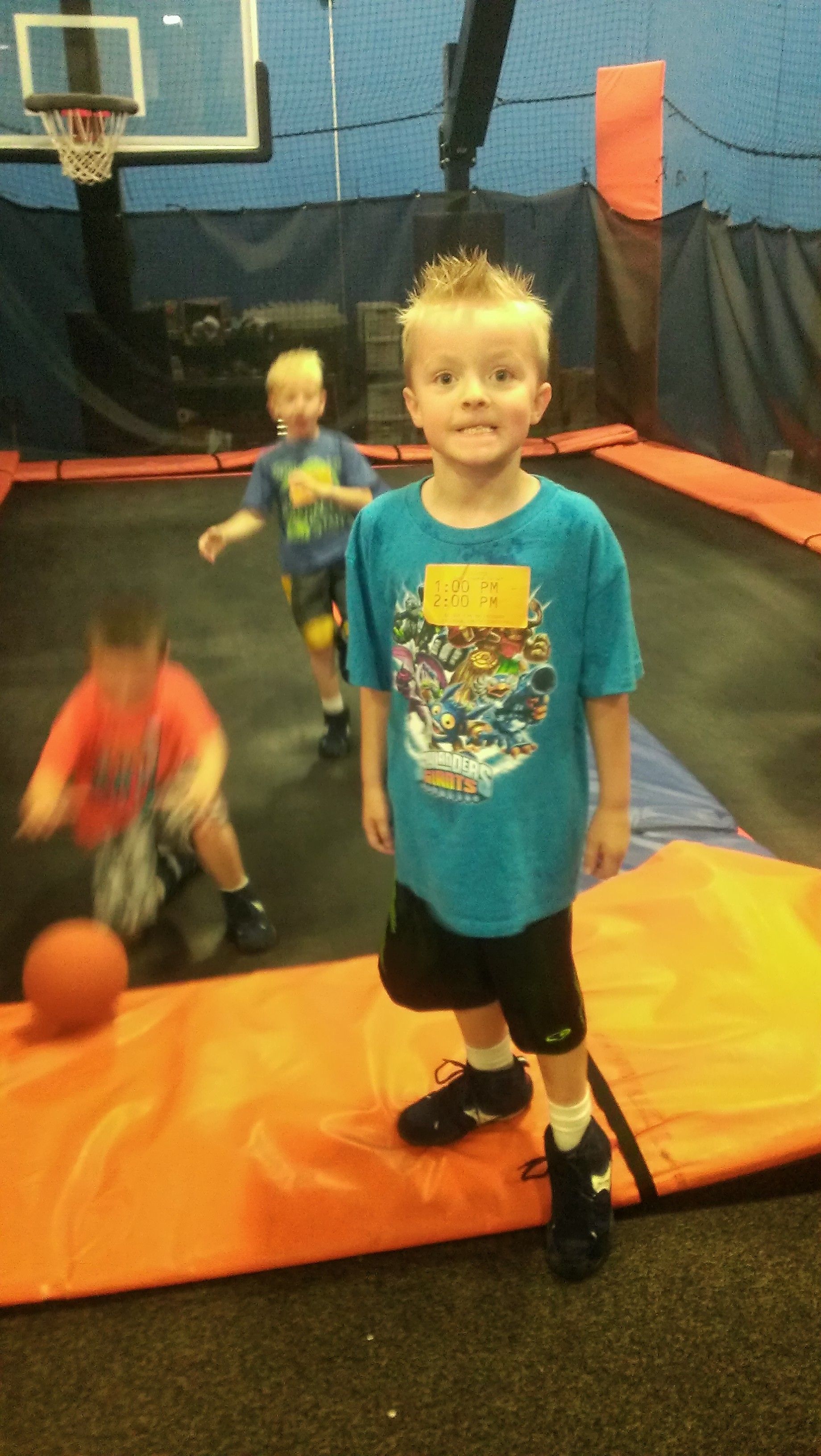 I made a Skylanders Portal cake and it was a hit. It didn’t taste so good (Tim thought it was fine but there was way too much frosting for my taste) but it looked awesome. 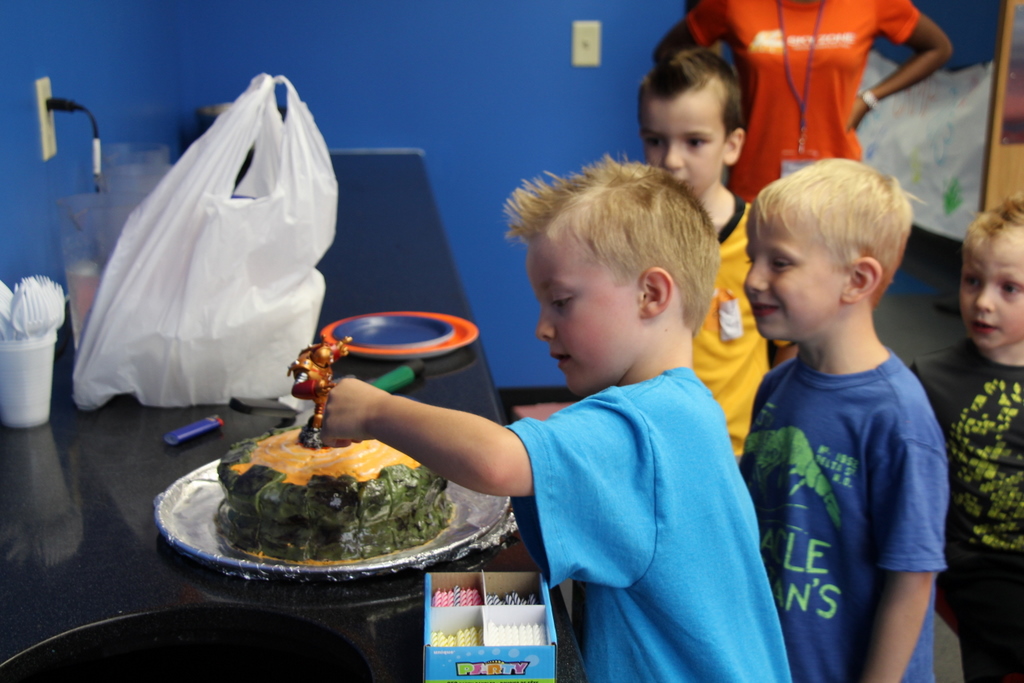 Here is Michael putting on his 7 birthday candles. 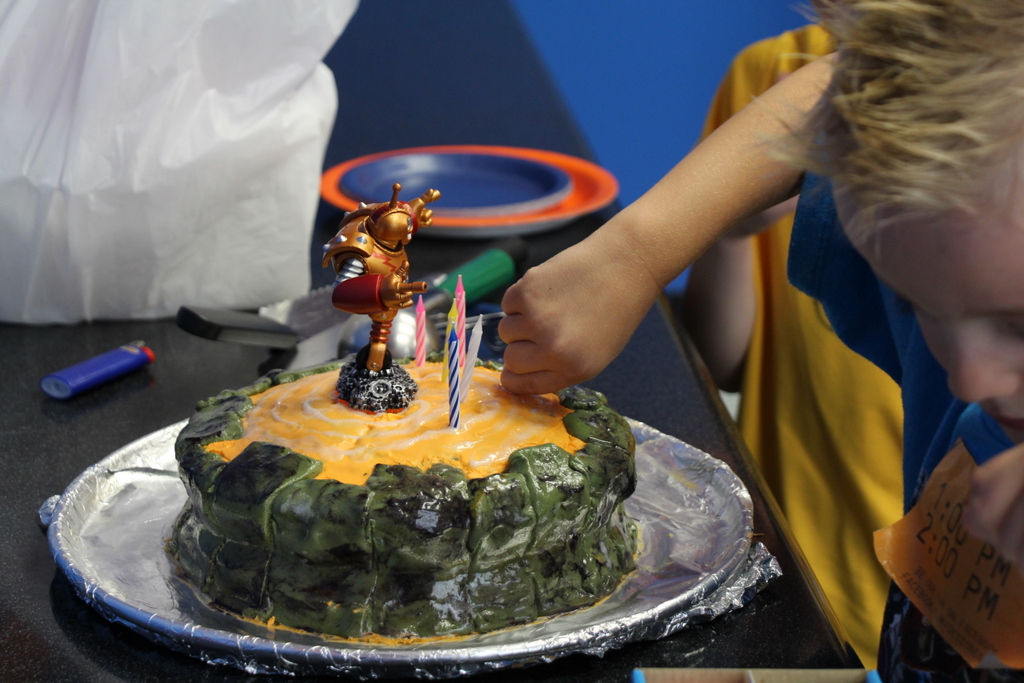 They ate pizza, cake and then opened presents. 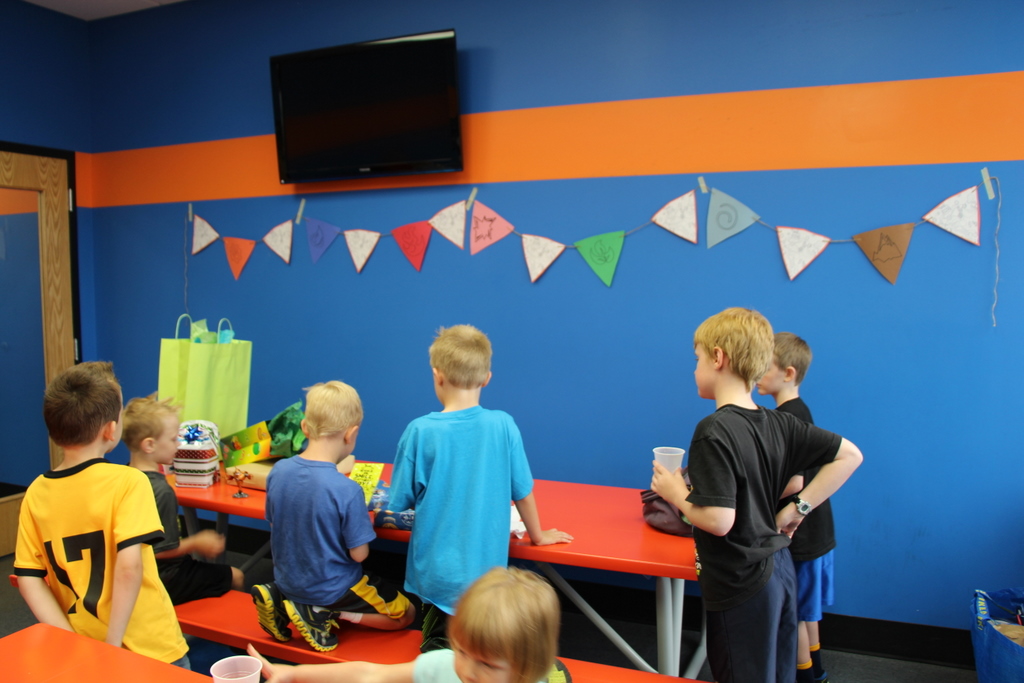 What I was most stressed about was the time that would be spent in this room. It was 40 minutes long and I was worried about the “dead time” after pizza, cake and gifts. The last thing I wanted to deal with was 7 physically exhausted boys that were on a sugar high. Seven is old enough that you can expect good behavior but still young enough that meltdowns can happen pretty easily.

I made a Skylanders Bingo game to kill the time but Sky Zone has this party thing down to a science. Just as we were finishing up gifts and Michael was handing out gift bags parents started to show up. Tim was right. Nothing to be worried about. The bill was paid and we were loaded up in the car 5 minutes after the last kid was picked up. So worth every penny spent on the party. Again – NO CLEAN UP!

I am so happy we went through with the friends party. Michael had so much fun and it was so wonderful to see him playing with his friends. Summer birthdays are tough (I should know!) because families are so busy during the summer it is hard to round up enough friends for a party. This wasn’t a huge birthday party but the kids had so much fun that I don’t think it mattered.

Michael is already planning his party for next year!