Bear with me, this post is going to get a bit geeky.  After which, I promise to return you to pictures of Elise dancing like a princess.

I hope you like the site redesign.  It’s pretty significant in that instead of simply going out and choosing a new theme, we decided to build our own from the ground up.  Meg designed the whole thing, and I just put her ideas on the screen.  If I were left to design it, you’d probably be left with a white page with black text, and that’s about it.

The website redesign is also significant in that our theme was one of the last things on the site that wasn’t open source.  And this is where it’s going to get a bit geeky.

This site is running on a virtual server some where in Dallas, Tx.  The server is running an open source operating system (Linux),  and the operating system is running open source technologies to host this website (Apache, Php, MySql, WordPress).  This means that the code that is running this entire website is available to me to look at, modify, and distribute.  To most people that may not seem like a big deal.  Why would anyone ever need to see the source code if everything is running fine and doing what it needs to do, and that’s absolute true.  I would almost never need to even access any of the code running anything on this blog.  It’s written and maintained by developers far smarter and more capable than I am.

So why go through all of the effort of building the website on these open source technologies.  Why not just use Tumblr, Blogger, or even WordPress’s own blog hosting?  Or even easier, why not just post all our pictures to Facebook?  Everyone’s on Facebook, right?

The reason is simply because this website is more than just a blog.  It’s really become a living scrapbook for us.  We have Michael’s first steps, and Patrick’s potty training, and Elise’s birth story.    And we (let’s be honest, Meg) add to it every week.

If I want to keep this scrapbook safe, then I need to control where the pictures and stories are kept, how and when they are backed up, and in 50 years I need to be able to still look back at them and have them.  Look at it this way, I know there are scrapbooks and photo albums out there that are older than how long Facebook has been a company. What if Facebook goes away?  I feel bad for all of the people who have dumped their memories into Facebook when that happens.

As for our scrapbook, it’s fire proof, and backed up in 3 geographically separate locations, and the entire website and the code running it can be reconstructed and rebuilt at anytime on any computer because it’s open source.

And now, back to dancing Elise: 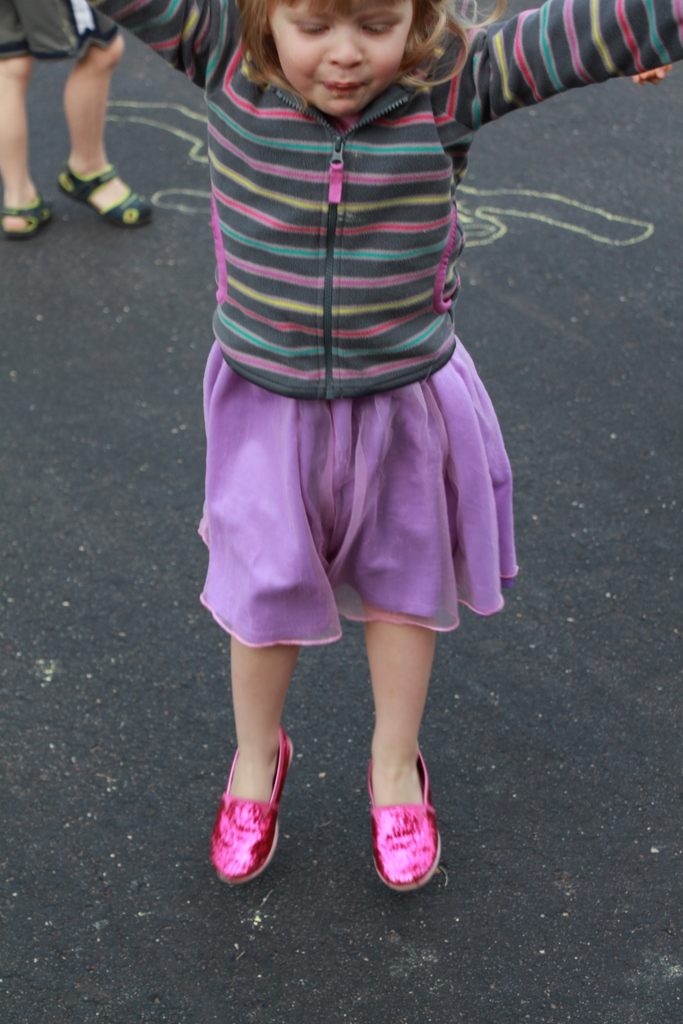 And here are the phone pics I snapped haphazardly in between coats of paint and finishing up the construction with Tim.

We tried to buy as little as possible to keep the cost down (I really want to put up new curtains 😉 ) so we reused the shelves from the old bunk beds for shelves in the new book-case. The previous bunks were held together with a bunch of dowels and a few bolts. The lumber was still good so we were able to upcycle the shelves into the bookcase. Since it was going to be painted it would turn out fine. All we had to buy were to 6 foot 1×12 pine boards. 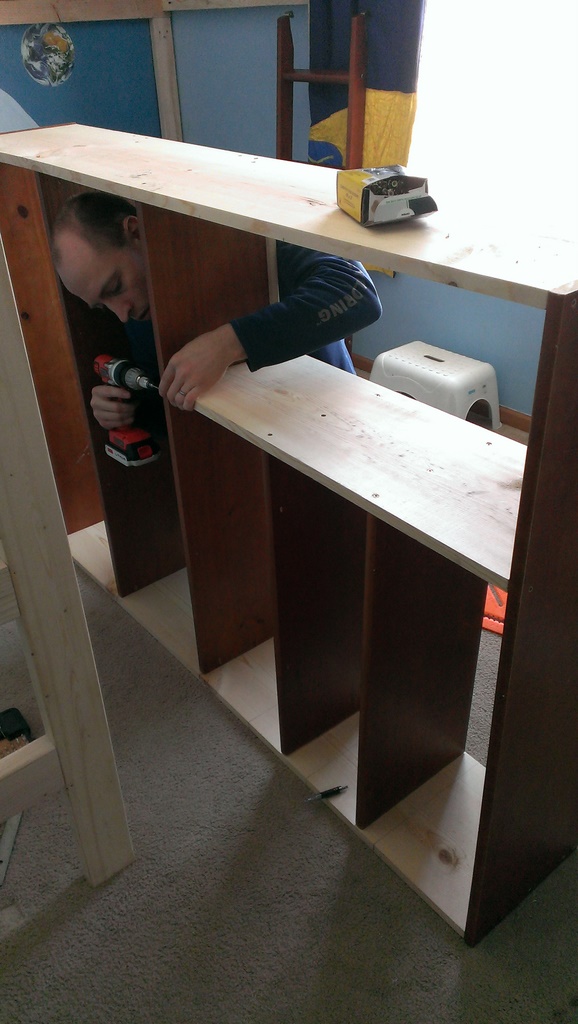 The size of the upcycled shelves dictated the design. I think it turn out pretty cool to have the different length of shelves. 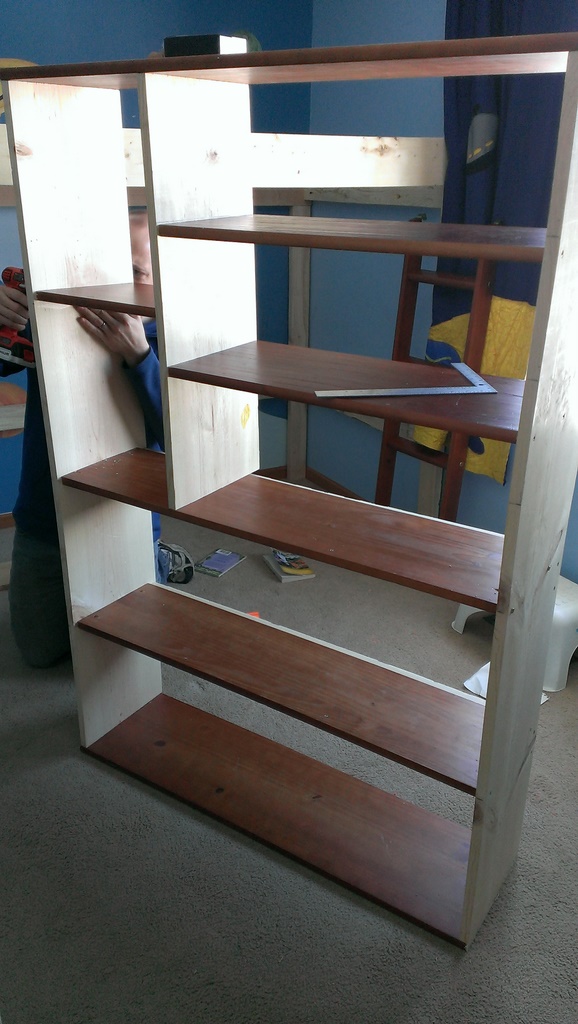 The bookshelf looked kinda cool in the above two toned state but the shelves were so banged and scratched up that in person they looked more like a recycled hot mess than upcycled custom bookshelf. So I pulled out the primer and went against my norm and chose blue paint we had left over from another project. The paint finish was Satin so it will stand up to abuse once the final coat is on and it has enough time to “cure.” 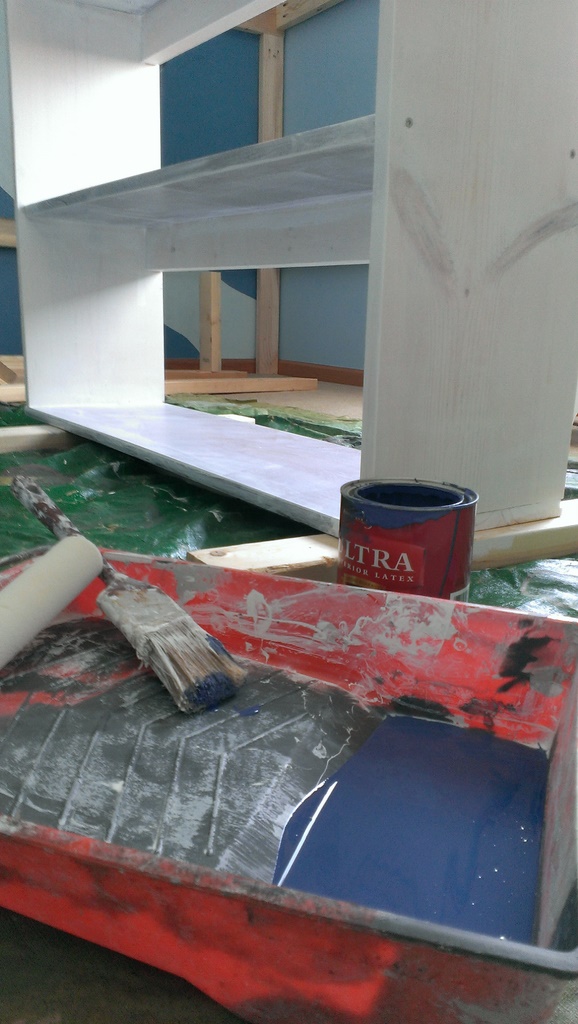 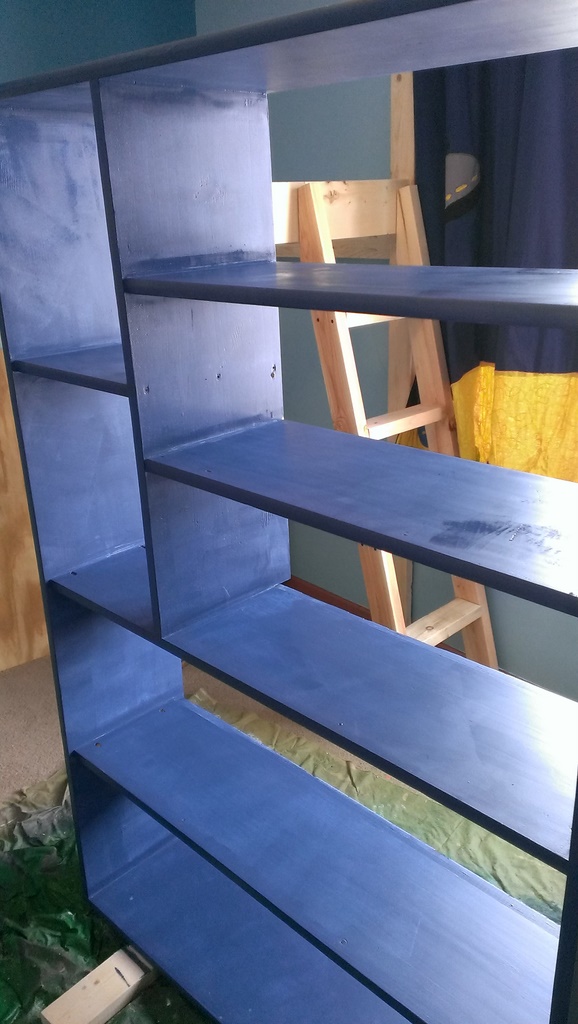 The bookcase is multi-purpose. Yes it will hold books and whatever else the boys over crowd the shelves with, but it also is the main support for the shelf that will cover the area in the corner that is open between the two lofts. 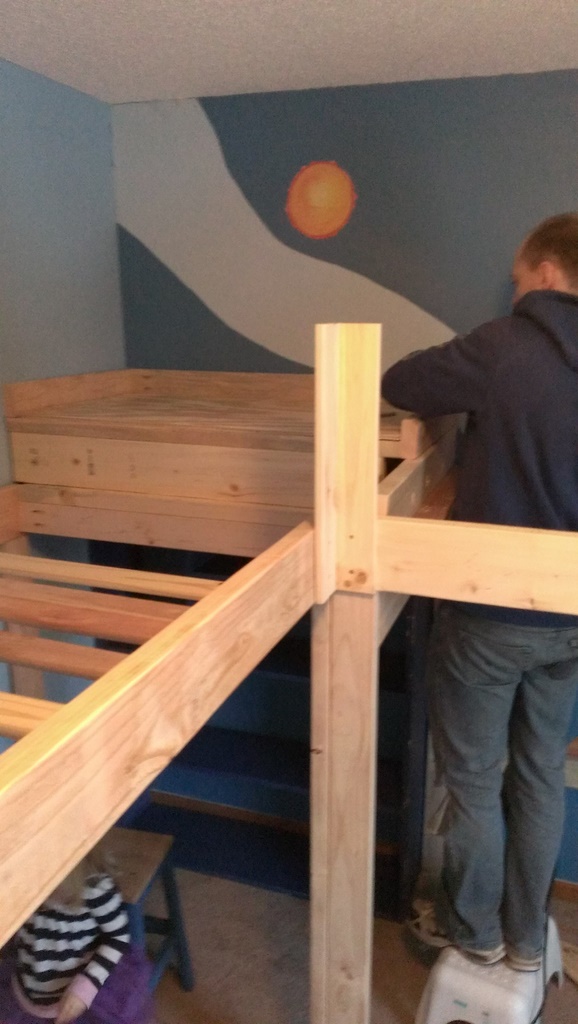 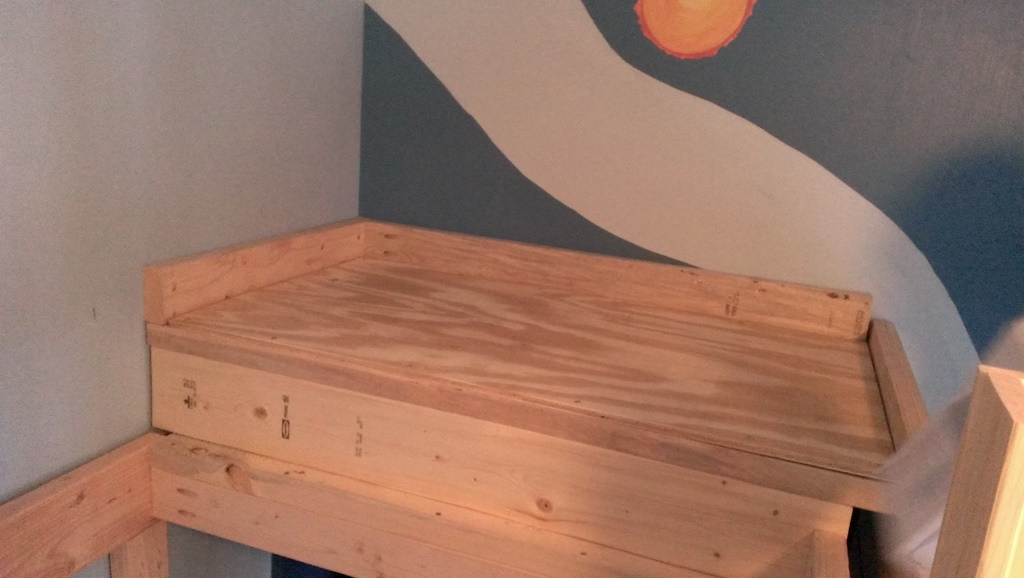 Tim used his mad math skills to adapt  Ana White’s ladder plans to make this ladder. He secured it in place with some heavy-duty bolts. 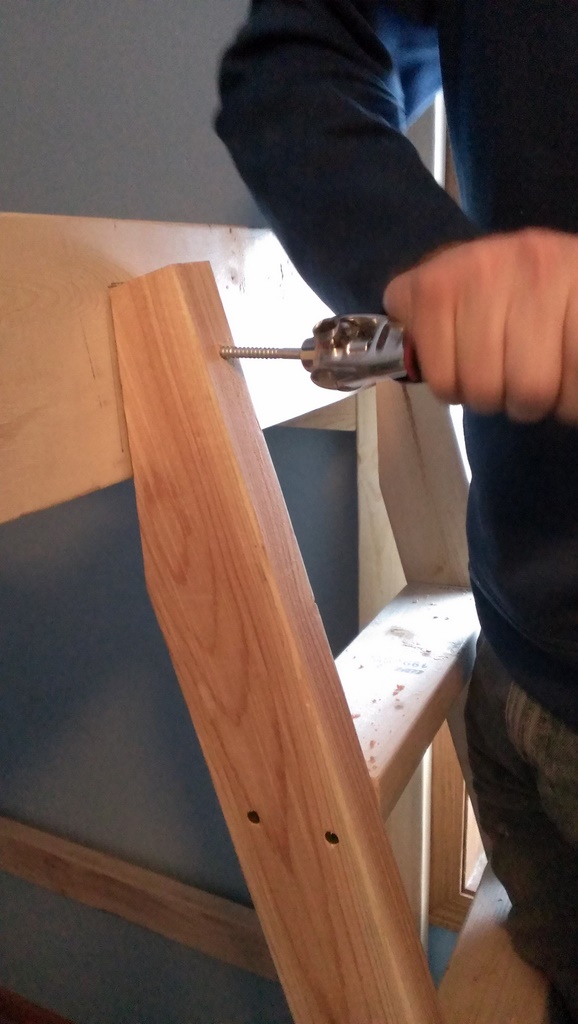 After the ladder was in place we put up the 1×4 braces for the rails and attached the top rail. We decided to wait on the bottom rail to see what the best height would be with the mattress on top of the lofts. 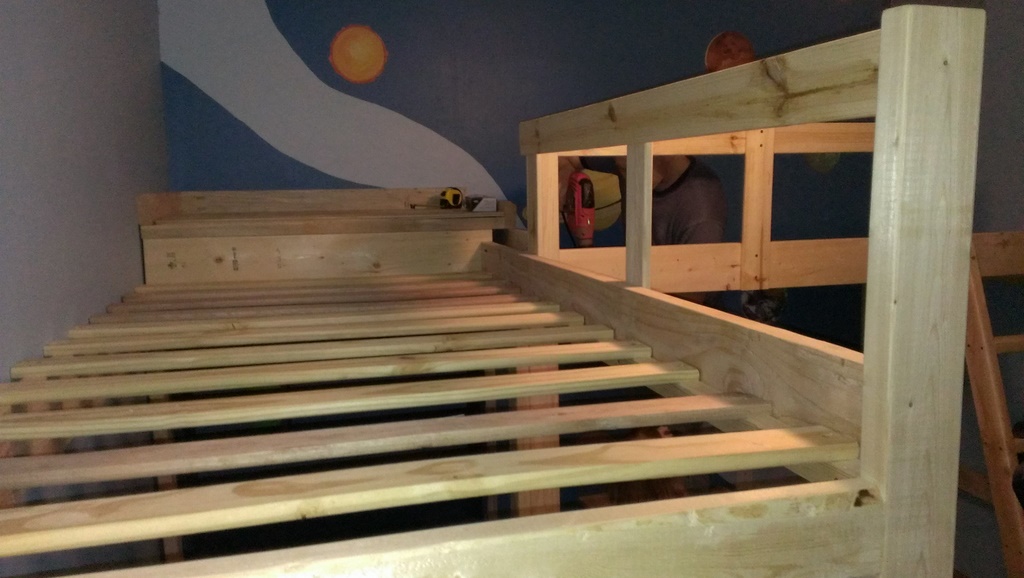 I was uncharacteristically meticulous about the placing of the screws. Because the screws were going to be seen I wanted them to be at consistent heights to look more polished. Their beds will never be made and clothes will be all over the floor but, damn it, the screws will be evenly spaced and look good. Below is not a phone pic. I took this with my good camera after the room was put back together. I love my camera too much to put it in harm’s way in a 12×10 construction area. 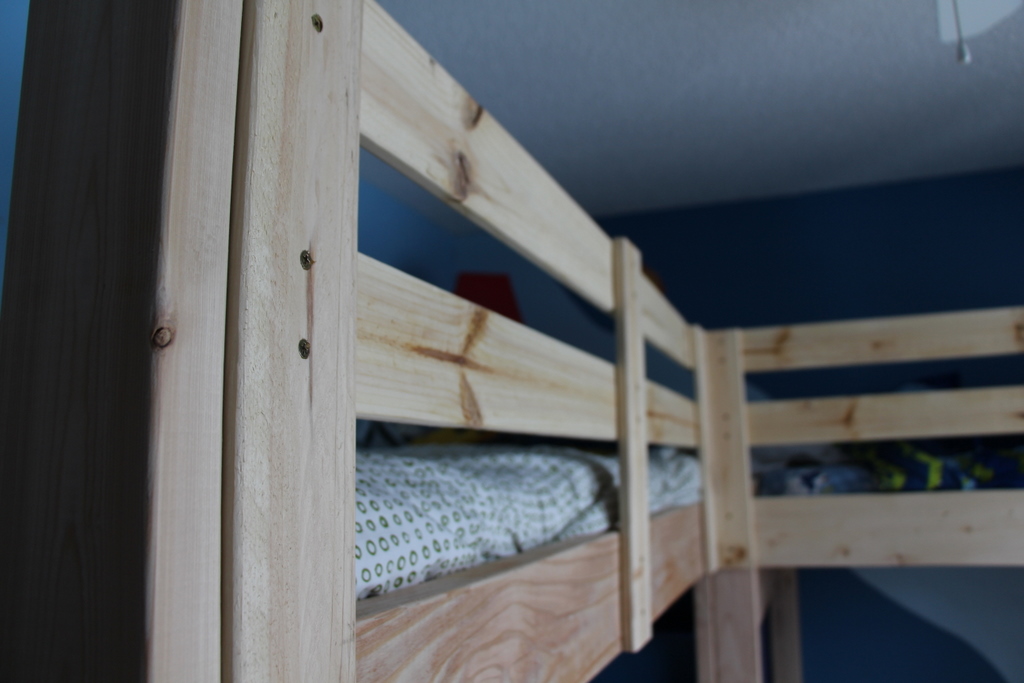 We were able to reuse most of the slats from the bunk beds. Tim redrilled pilot holes and screwed them into place. Now the slats are sitting on a 2×2 that has been wood glued and screwed into 2×6 rails instead of the previous bunk beds that the slats were attached to a 1×1 that was glued and nailed into a 1×6. You see how we up’d the sturdy factor. These things are solid.

Then came the mattresses so we could put in the final rails. Again with screws placement perfectly measured.

Once the final rails were in and we cleaned up our construction supplies, the lofts were ready  for the boys to sleep on their new beds for the first time. Just in time too, because while I was running the vacuum and putting the mattresses back in place Tim was pj-ing the kids and singing Twinkle Twinkle while they brushed their teeth. 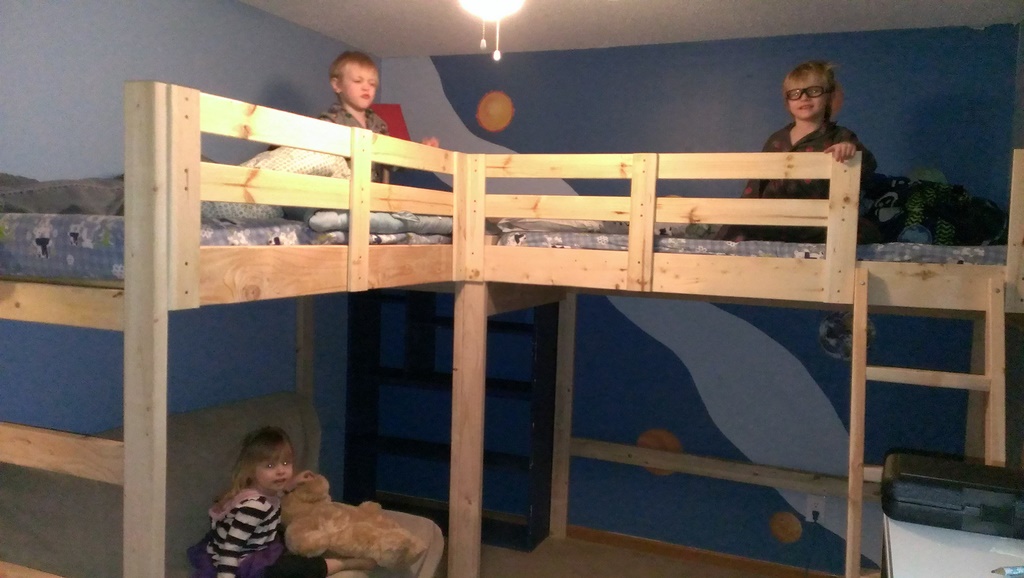 They loved it. To say that Elise was upset when she was told to go to her room for bed time is an understatement. 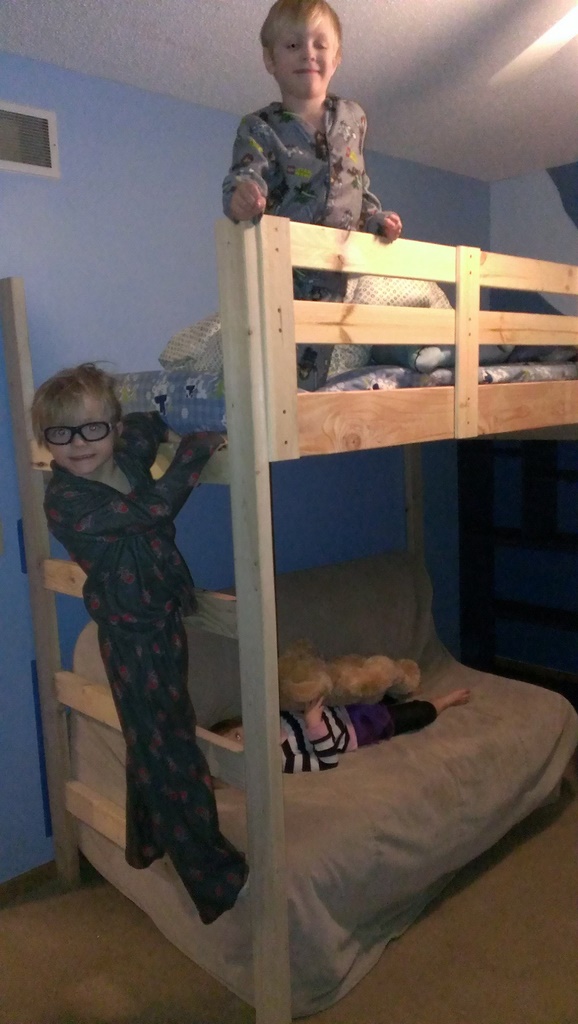 The boys have plenty of head room both under and on top of the lofts. 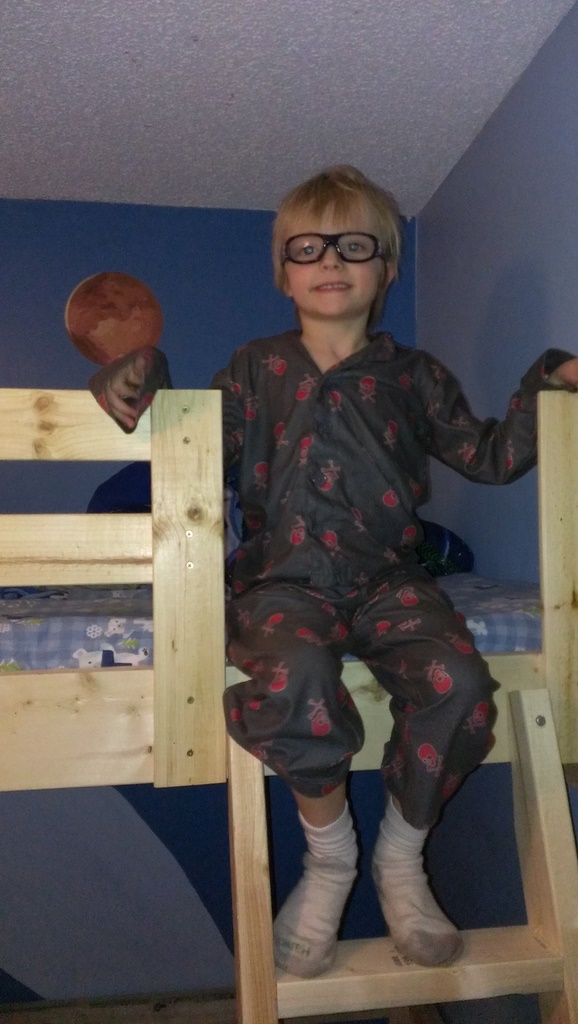 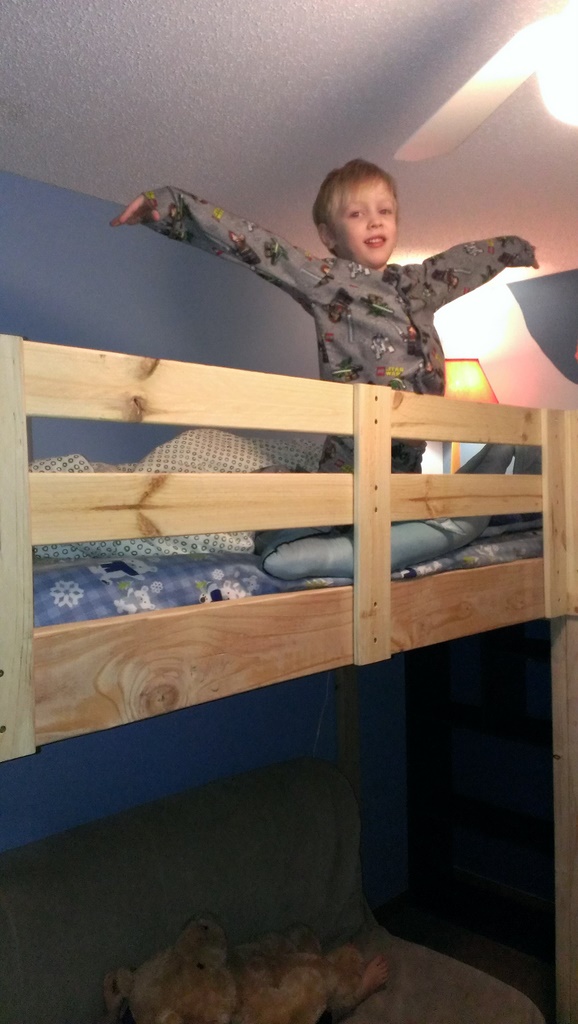 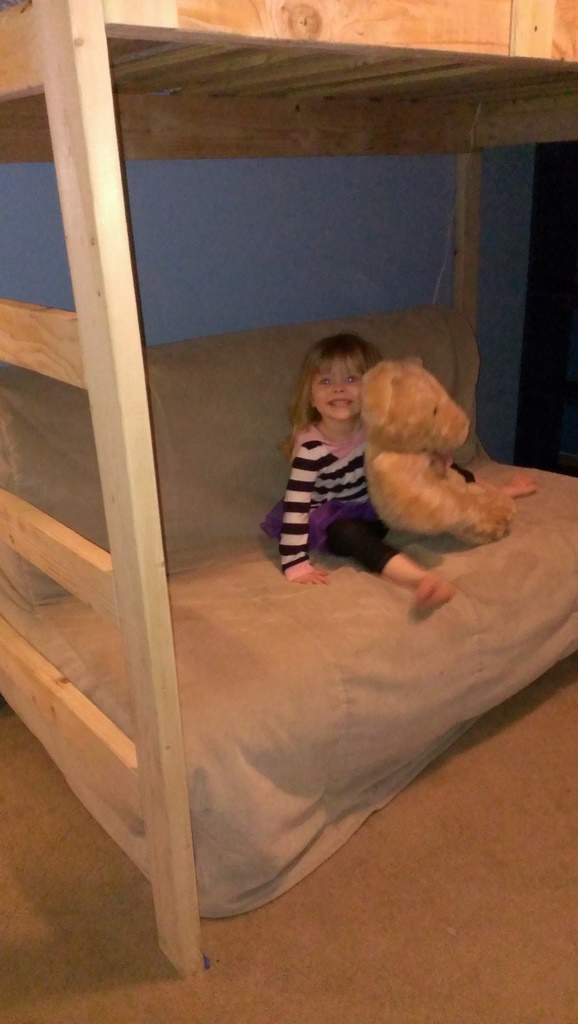 I am kicking myself for not having my good camera for the “reveal” to the kids but since the project is far from complete I can solace in the fact that I will have another chance once everything is stained, final coats of paint are on, and I put a few personal touches into their space.

Sneak Peek at the bunks stained with the DIY curtains up: 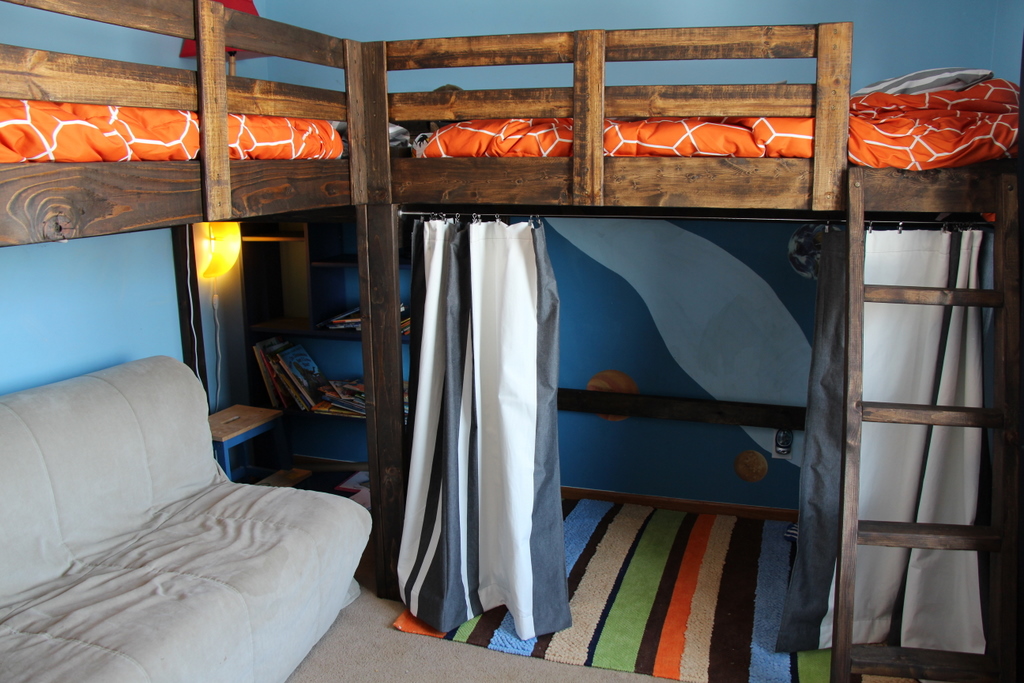 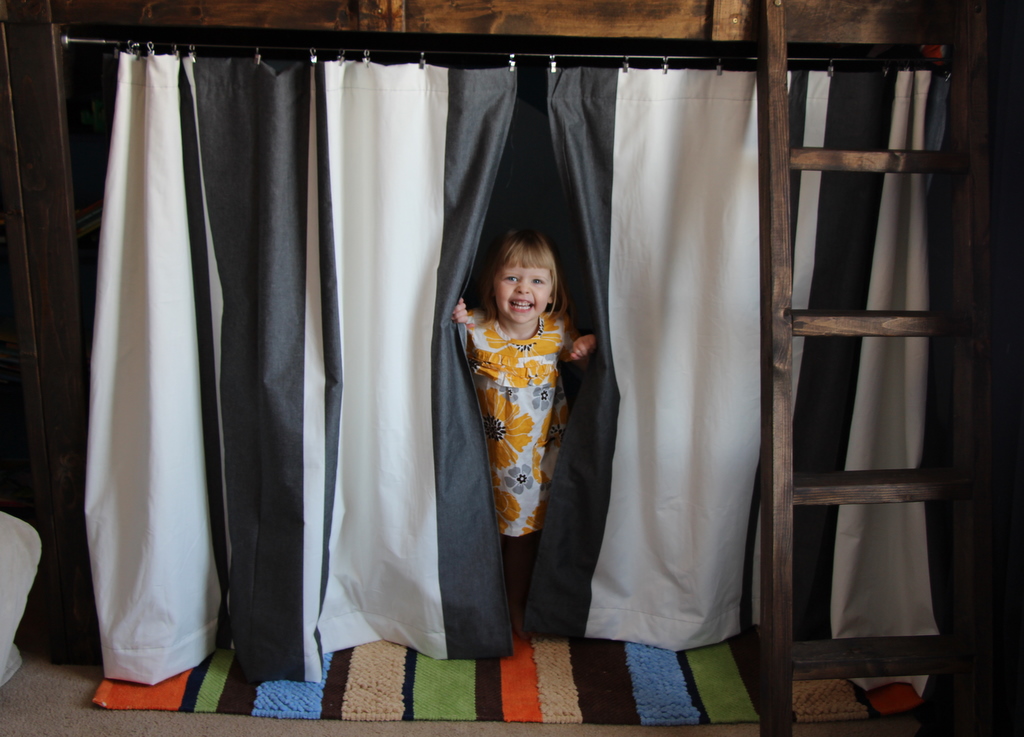