“I am having trouble wrapping my head around the fact that the boy schooling me in #SkipBo is the same baby boy in the photo behind him. #familygamenight #theygrowuptoofast #parenting”

You can follow me on Instagram here for the most up to date photos of the kiddos and going-ons at the Shannon house.

We surprised the kids on the last day of the AGM and told them that we were not taking a plane home that day, but were instead taking a taxi to Walt Disney World. We gave them their Magic Bands, we called a cab and I began to pray that the trip would go smoothly. I love my kids but they are not the most flexible travelling companions. 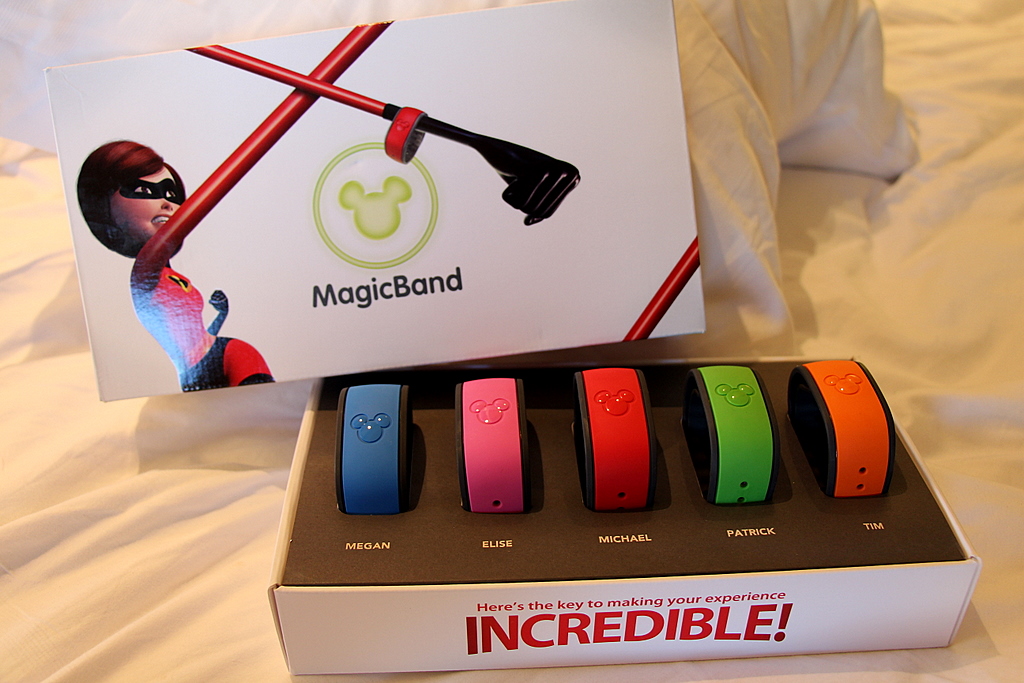 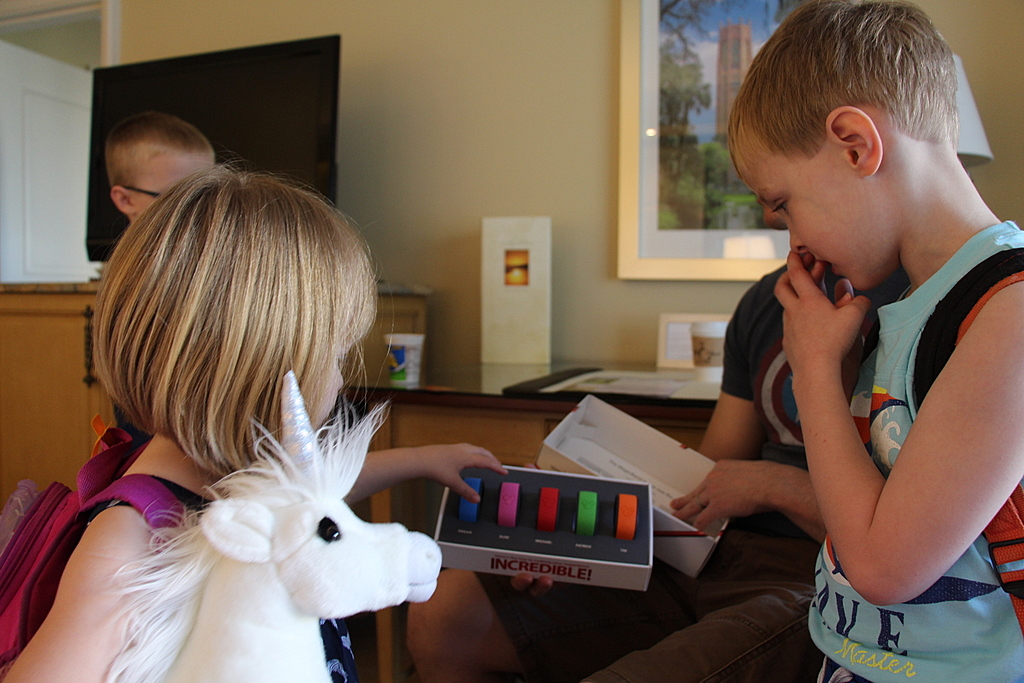 We checked into our resort around 11 am and after a fast unpack and repack of my backpack (i.e. our life support system to help us survive Disney World parks) and coating our pasty MN skin in sunblock (We don’t mess around with that pansy-ass sun screen stuff – 45 spf or higher, or we don’t use it) we headed to the resort’s shuttle location and hopped a bus to Animal Kingdom. 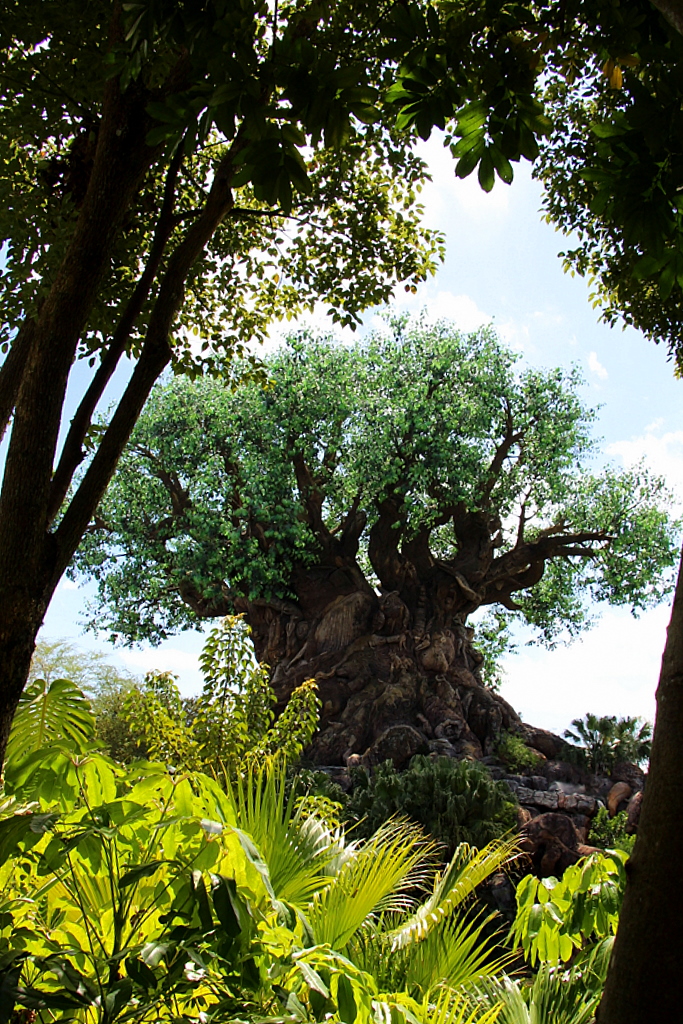 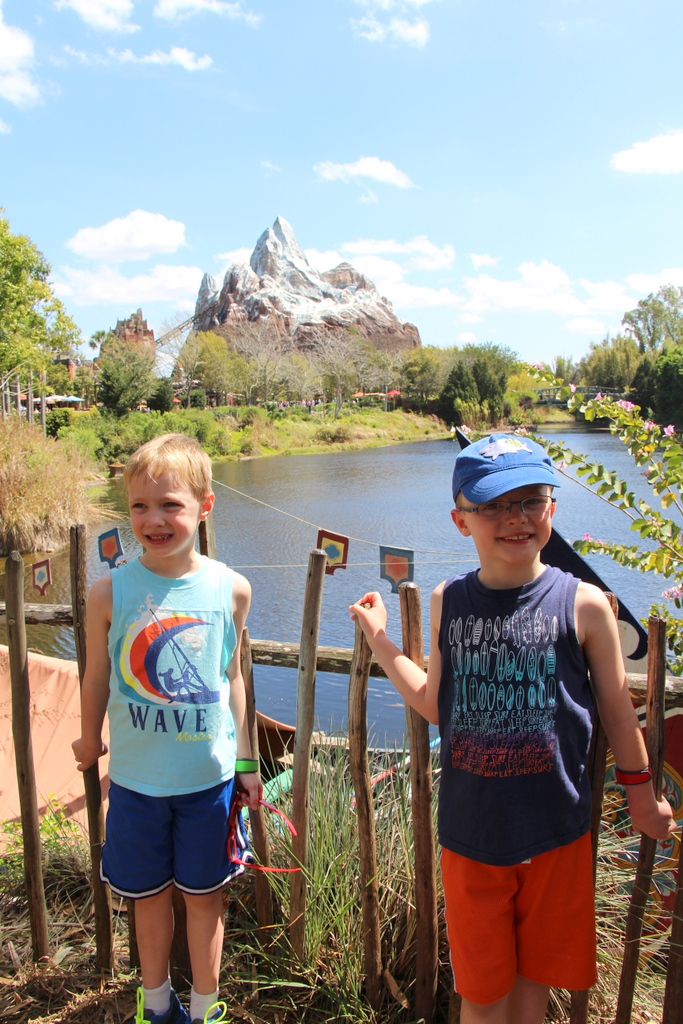 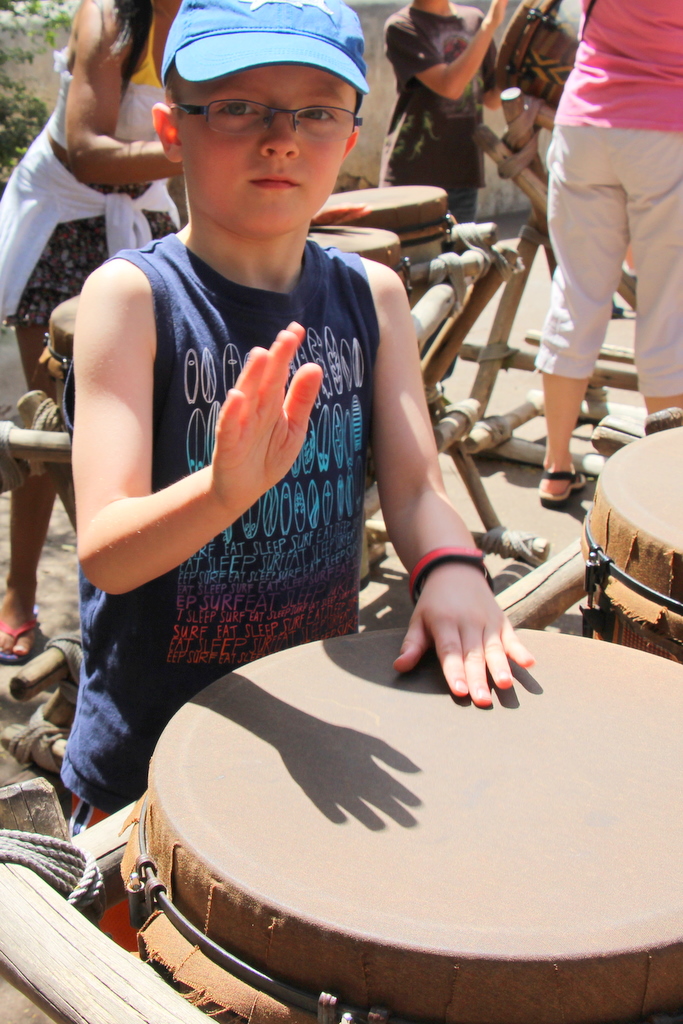 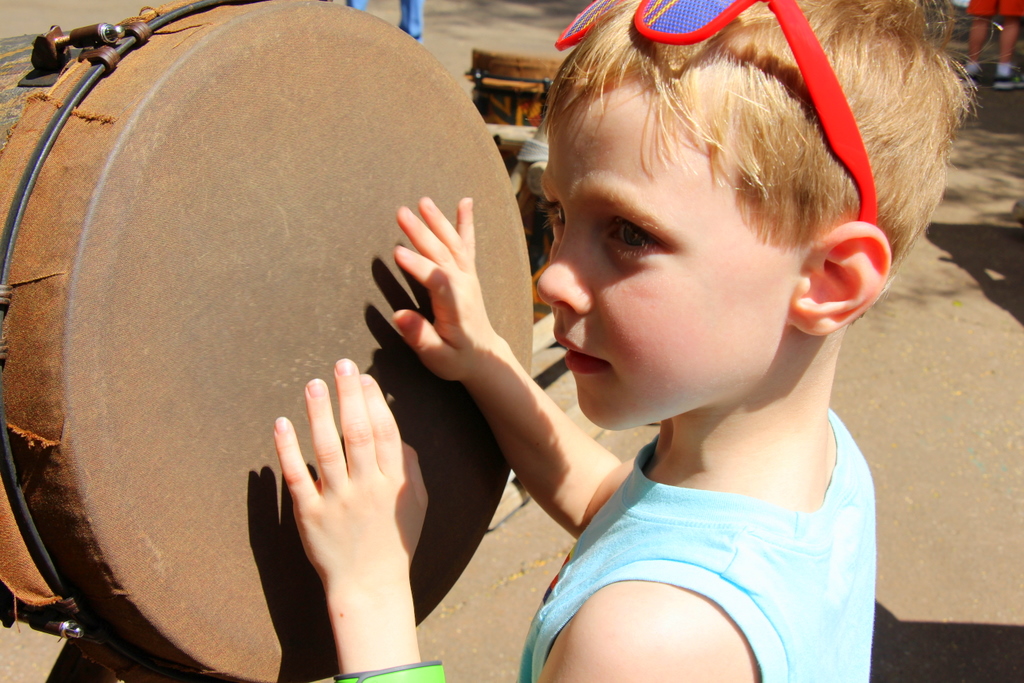 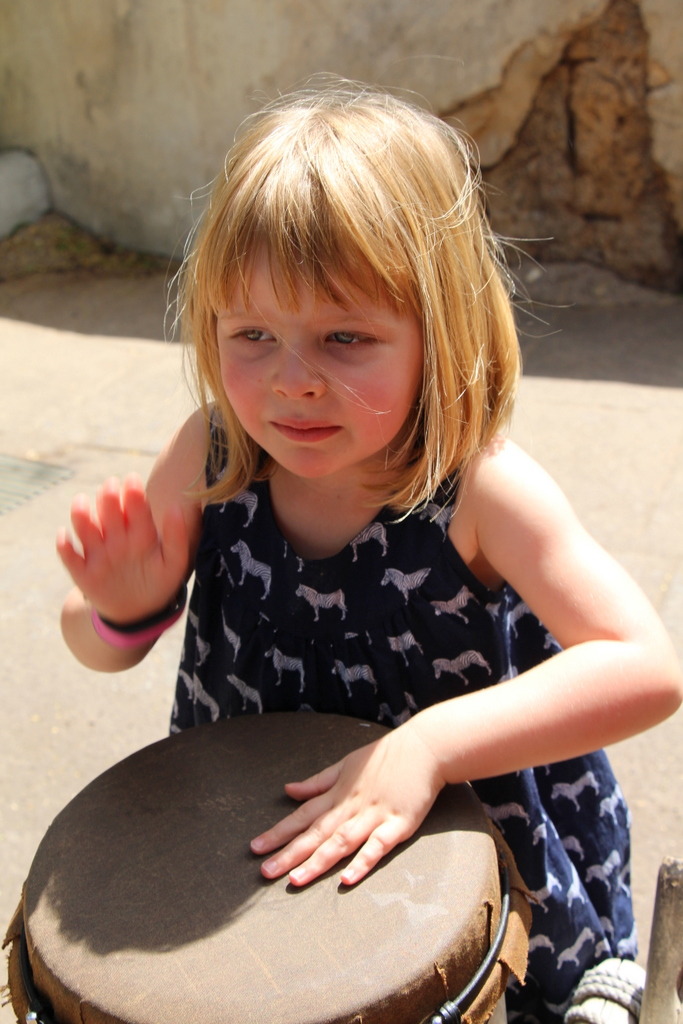 We ate a big buffet lunch at Tusker House. It was good food. They had safe kid friendly food like mini corn dogs and UnCrustables and yummy cous cous salads and smoked salmon for me. I don’t know what Tim ate (probably hunks of the pork or beef they were carving), I was too busy to pay attention to his plate because I was trying to eat as much as I could, drink as much iced tea as my bladder (girl has got to hydrate!) could handle and take as many photos I could of the boys meeting Donald, Goofy and Mickey. 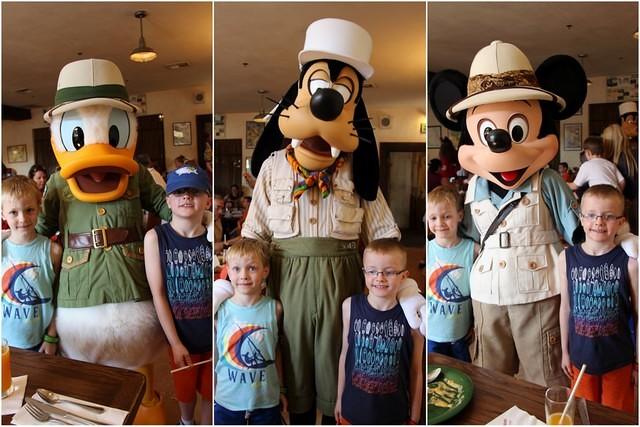 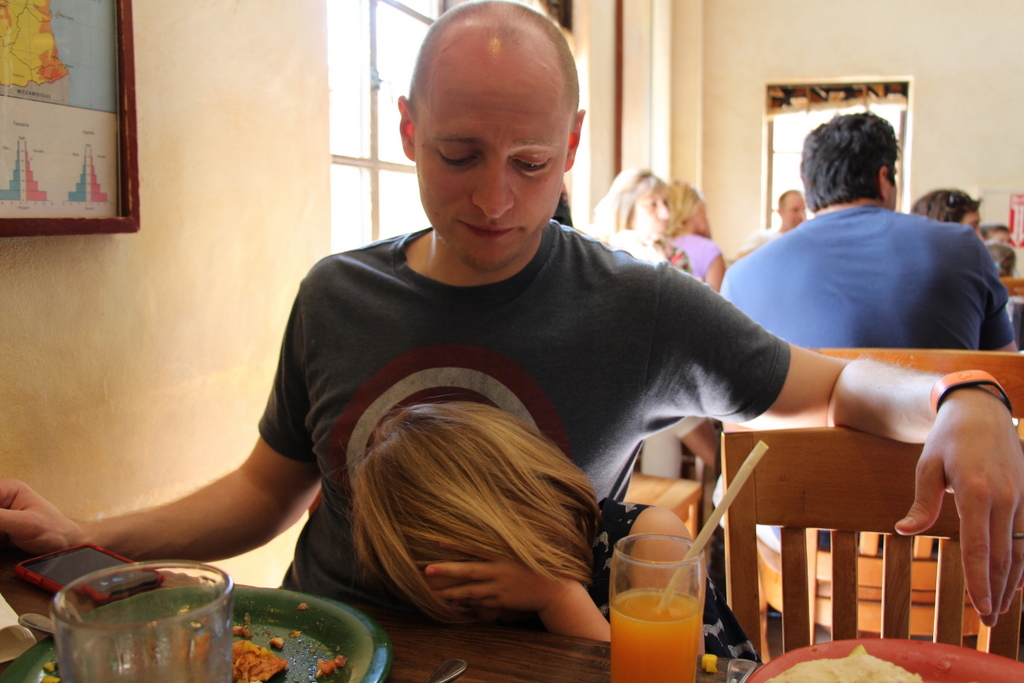 This was our first day using Magic Bands and there was the slightest learning curve but mostly they worked very smoothly and were really cool. All our Fast Pass info was stored in there so when ever we were scheduled to jump a line, we would put our bands “Mickey to Mickey” and if the light turned green we got to pass. In true Clute fashion there were times when we were a few minutes early for our FP scheduled window (1 hour windows) and the person checking the bands would tell us to wait x amount of minutes and come back. Even if we did that we were still saving HOURS of waiting in line for rides. By the end of the trip we were all Magic Band pros. 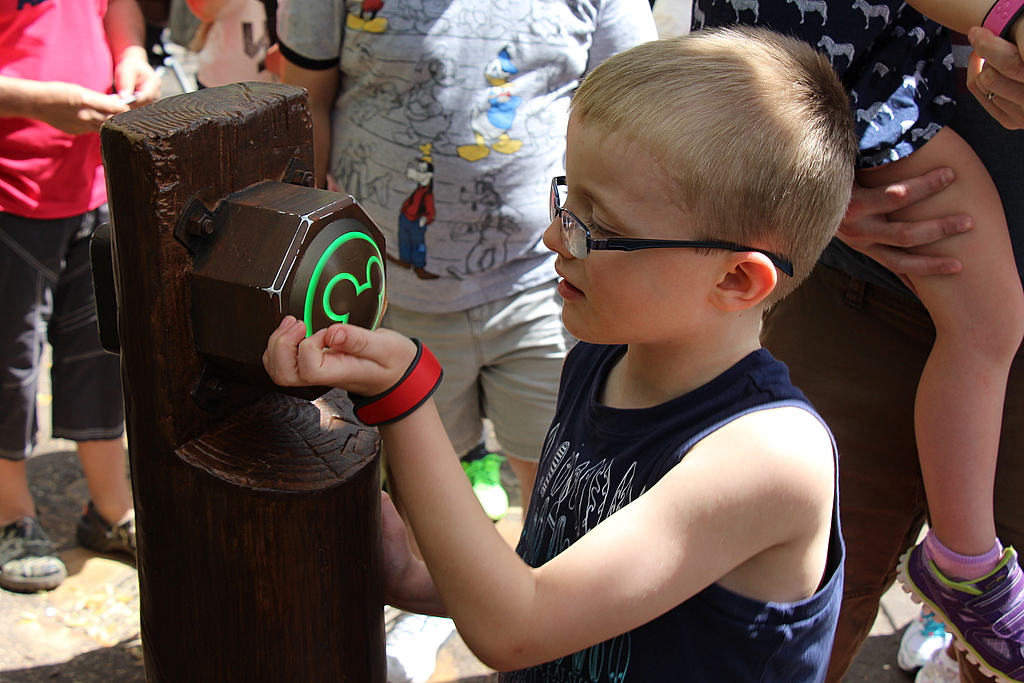 My favorite part of the day was a tie between riding a roller coaster with the boys (Tim and I took turns riding roller coasters when Elise wasn’t tall enough) and going on the safari. 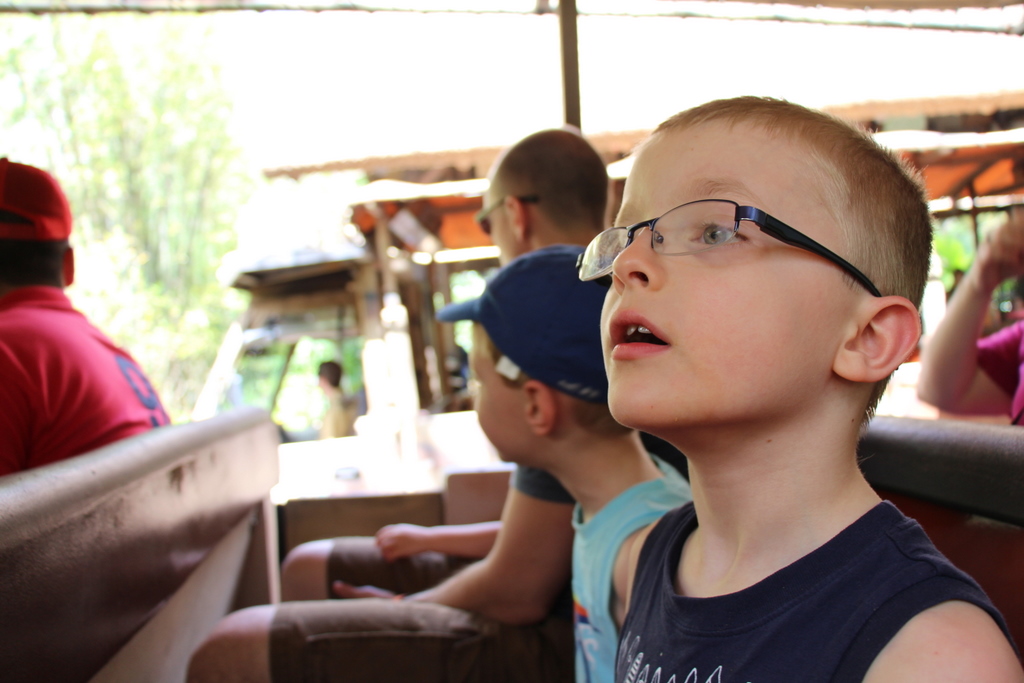 The animals were so close! 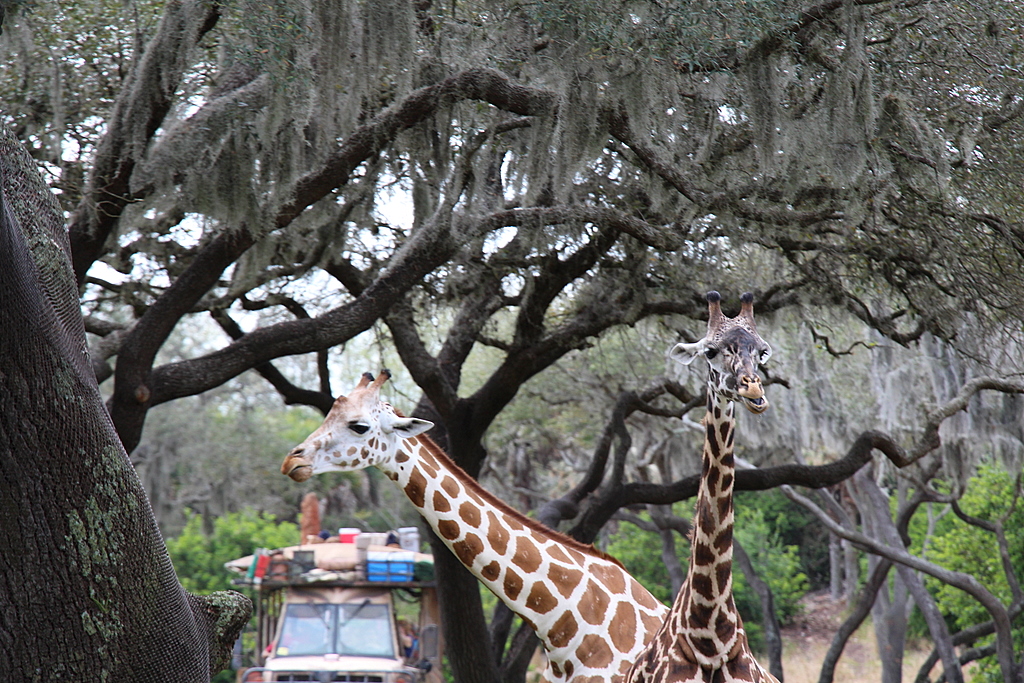 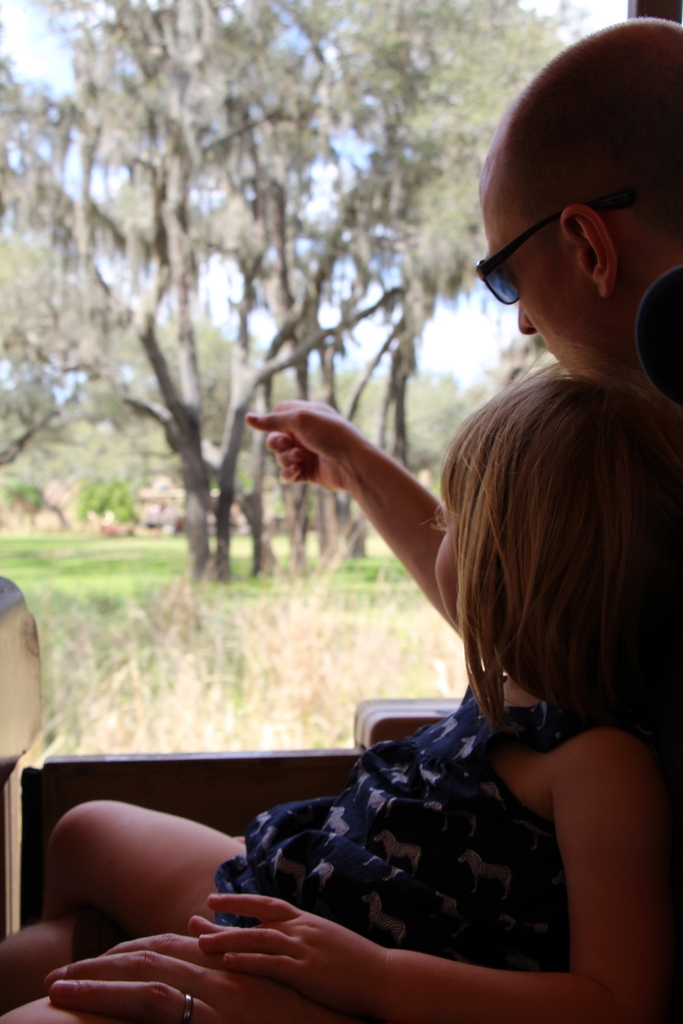 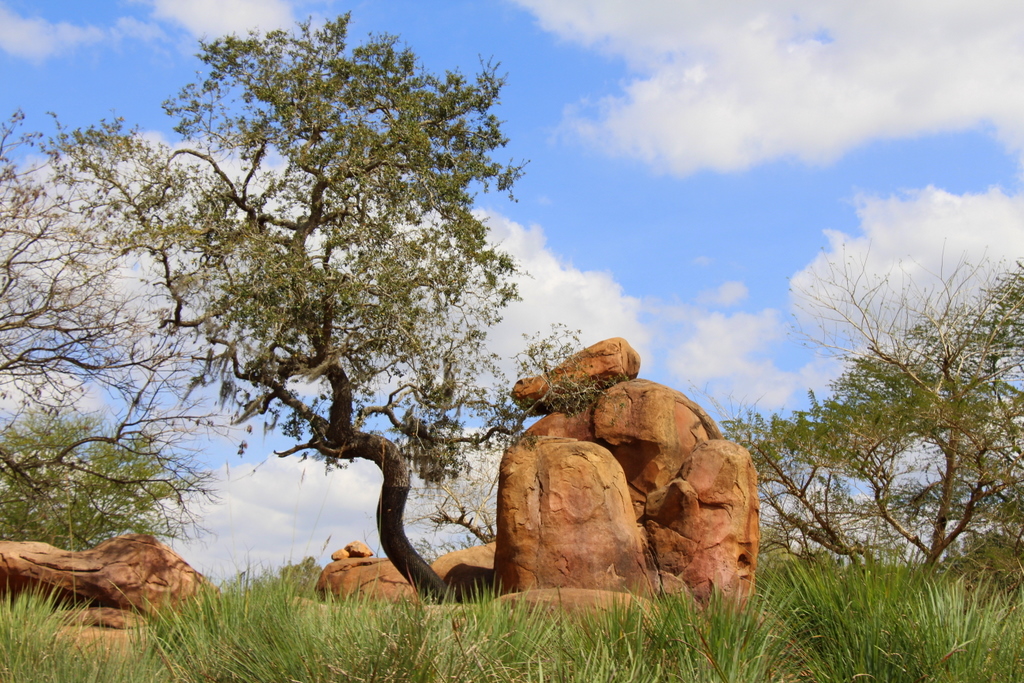 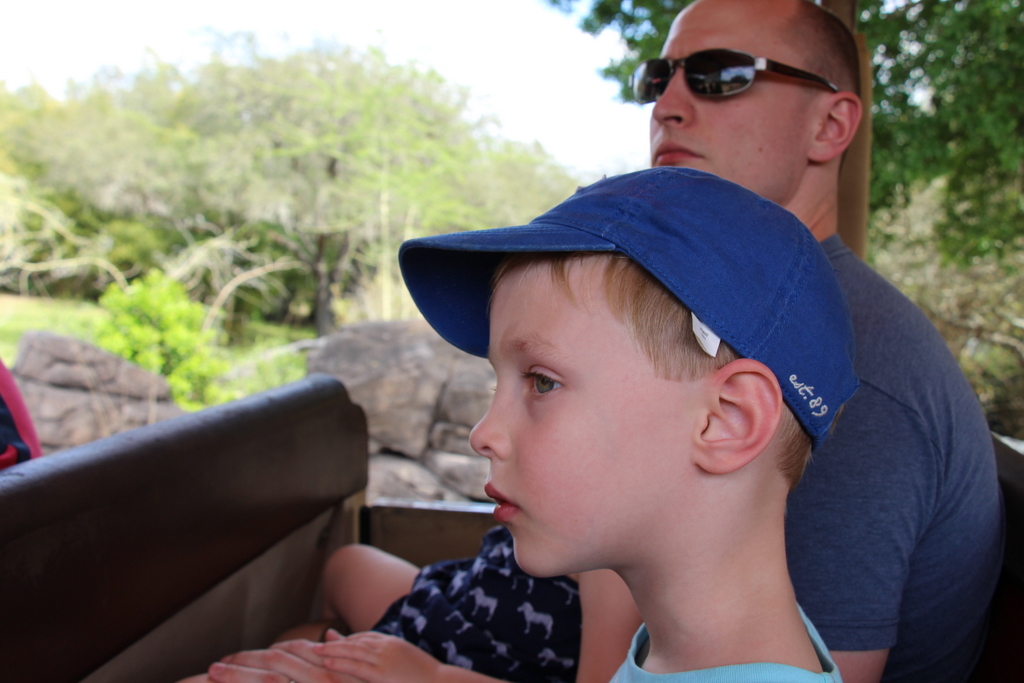 This is how close we got to Rhinos. 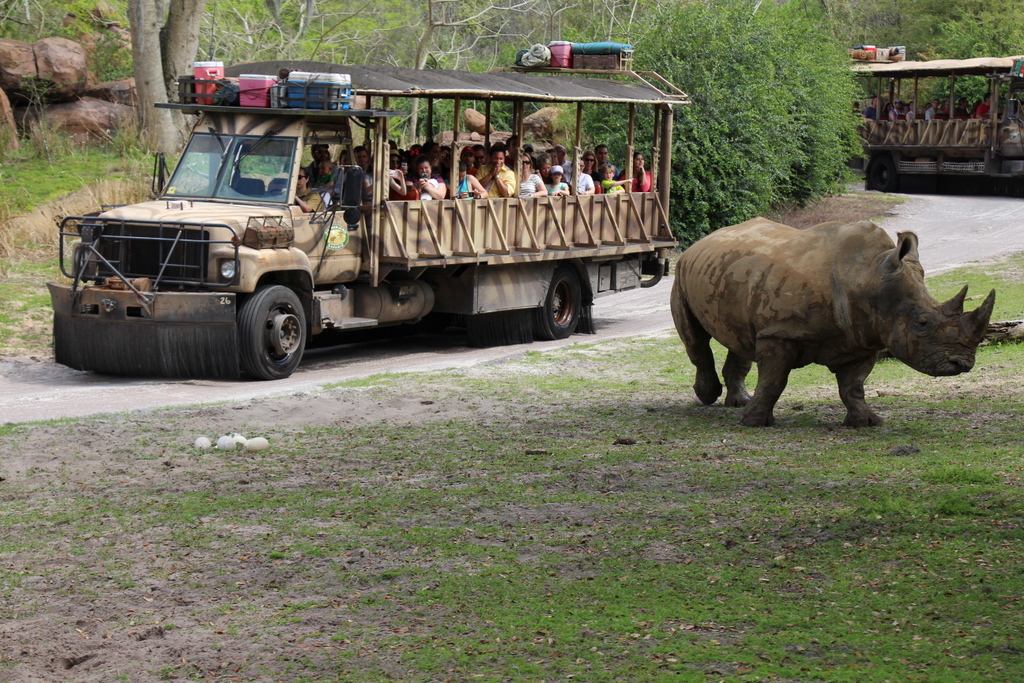 All five of us loved the safari and it was the perfect break in the day to just sit down, relax and enjoy. Even though we were taking in so much, it was still an incredible sensory break for all of us, especially Michael. Another Shout Out to Jess (Easy Days Getaways) for scheduling our Fast Pass times so perfectly. We got to jump the line and take a break right when we needed to!

After the safari we walked along one of the trails which held more animals. It was fun but Tim and I both commented about how nice the MN Zoo is. You don’t realize how good it really is until you are at Disney’s Animal Kingdom and the MN Zoo trails are nearly as impressive as the Animal Kingdom trails. 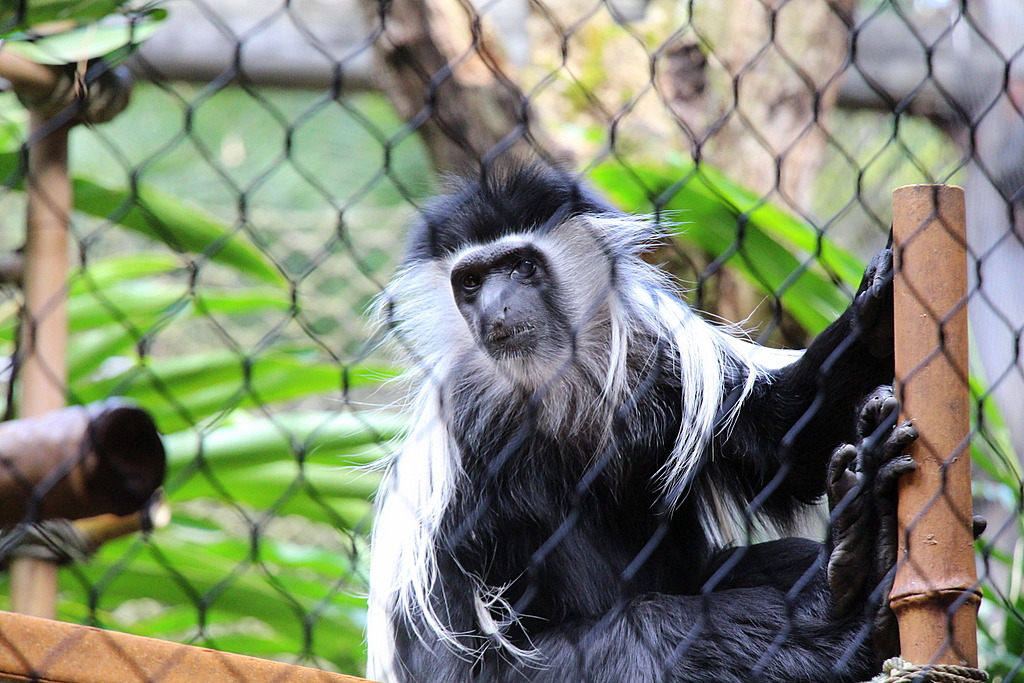 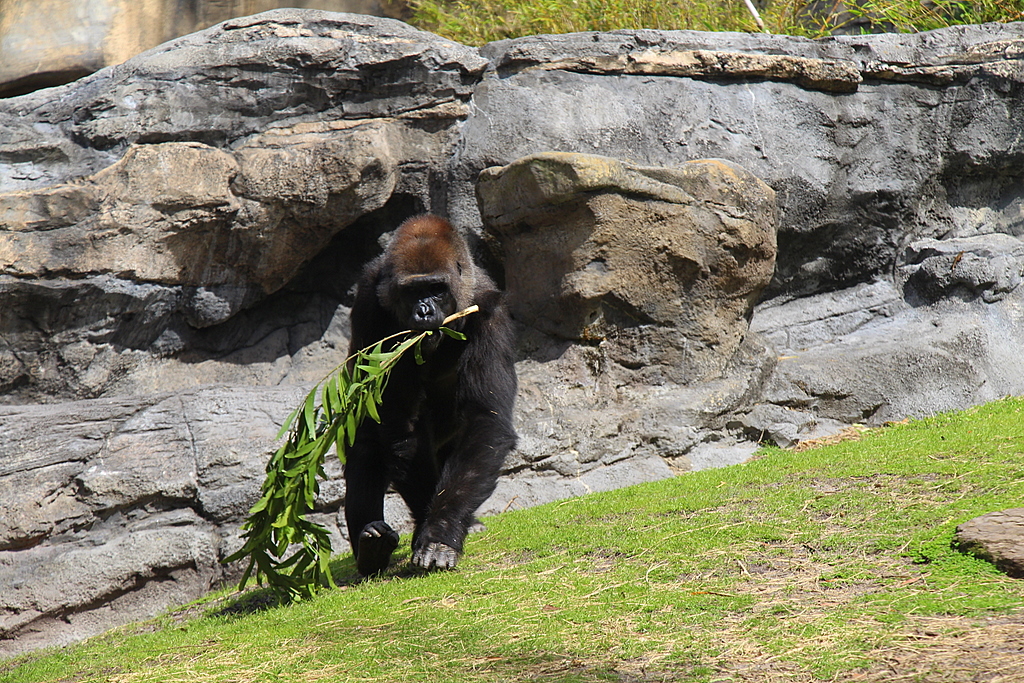 We watched the parade, totally worth finding a good place to watch. The floats were incredible. The kids loved it and they waved at every float that went by. 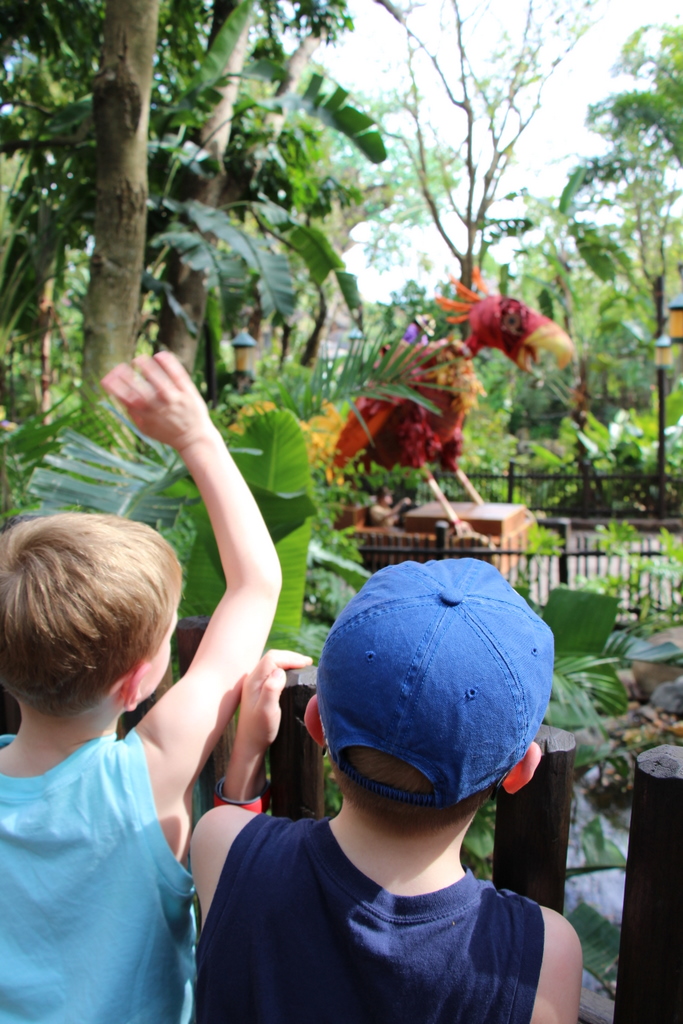 In my haste to get this post done I completely forgot what my absolute favorite attraction at Animal Kingdom was…. 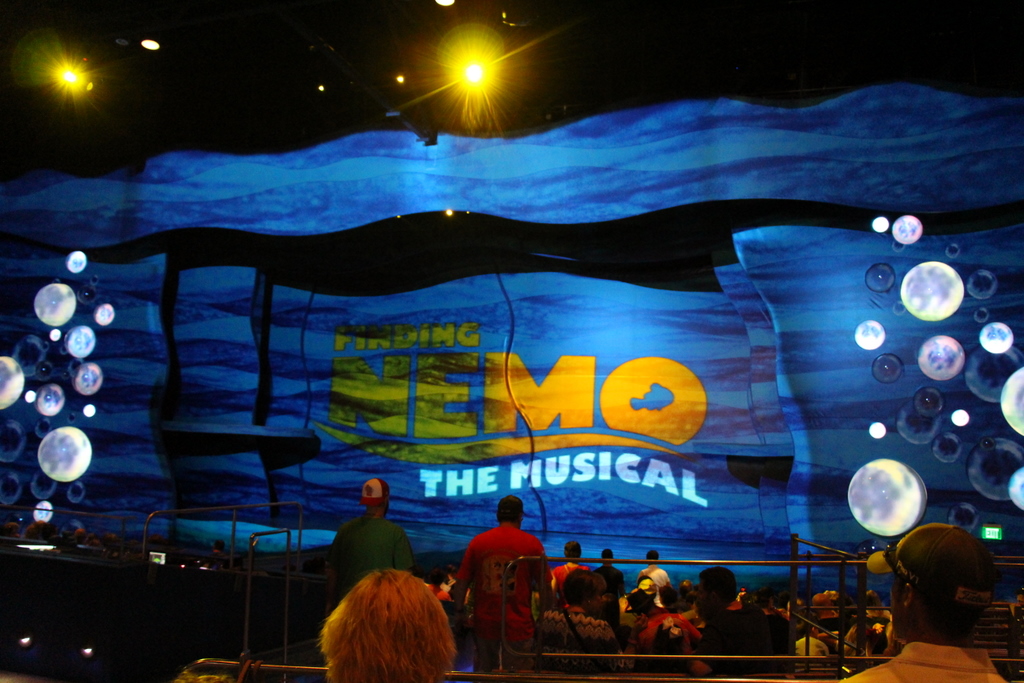 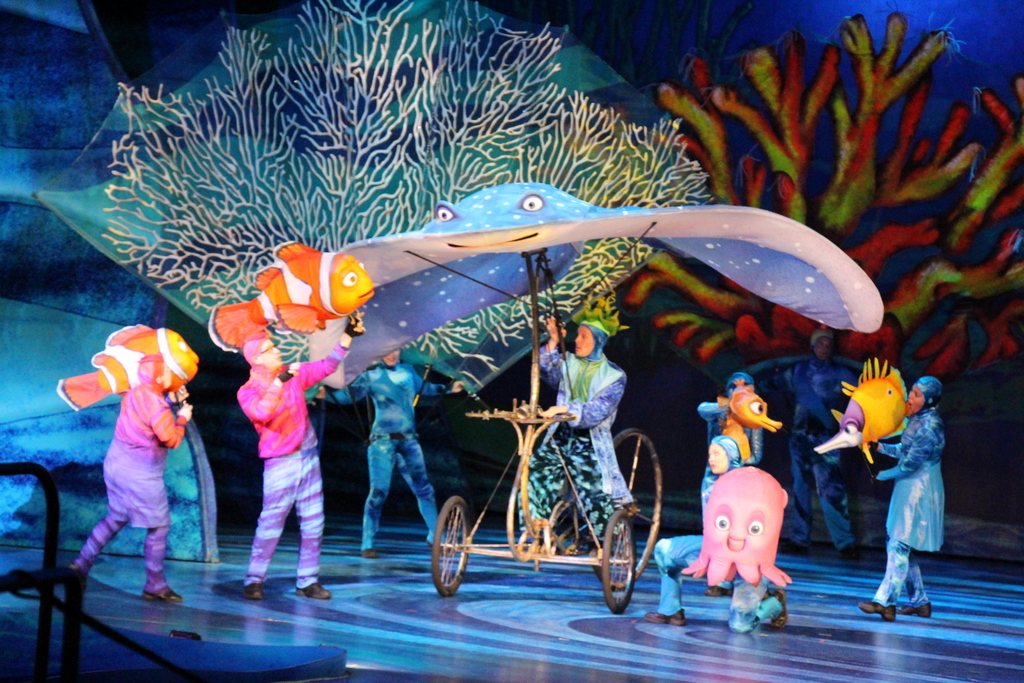 The kids have never seen anything live on stage before. I know, shame on me. I was a theatre major who strongly believes that theatre is good for kids for countless reasons and I have yet to take them to a show. They were entranced. I cried because my kids were loving theatre and because I love theatre and because Finding Nemo always makes me cry. The ticket price to get into Animal Kingdom is worth every penny just to see this show. It was my favorite attraction out of our entire Disney trip.

One of the things that surprised me most about our day was how many things there were to do that didn’t involve standing in line. The drum photos pictured above were a display they had set up so kids could play drums. There were water fountains, not drinking fountains, water fountains that the kids could cool off with and the best of all, the Dinosaur Excavation site. Basically it is a completely themed out play ground and giant sand box with the best sand in the world. The kids could have spent hours playing in the playground and sandbox. It was the perfect break for them to blow off steam, not stand in line and to also take a break from each other. Remember, this was our first day of Disney but it was our 4th day in FL so temperatures were running high and the boys could be quick to fight if they didn’t get a break from each other. 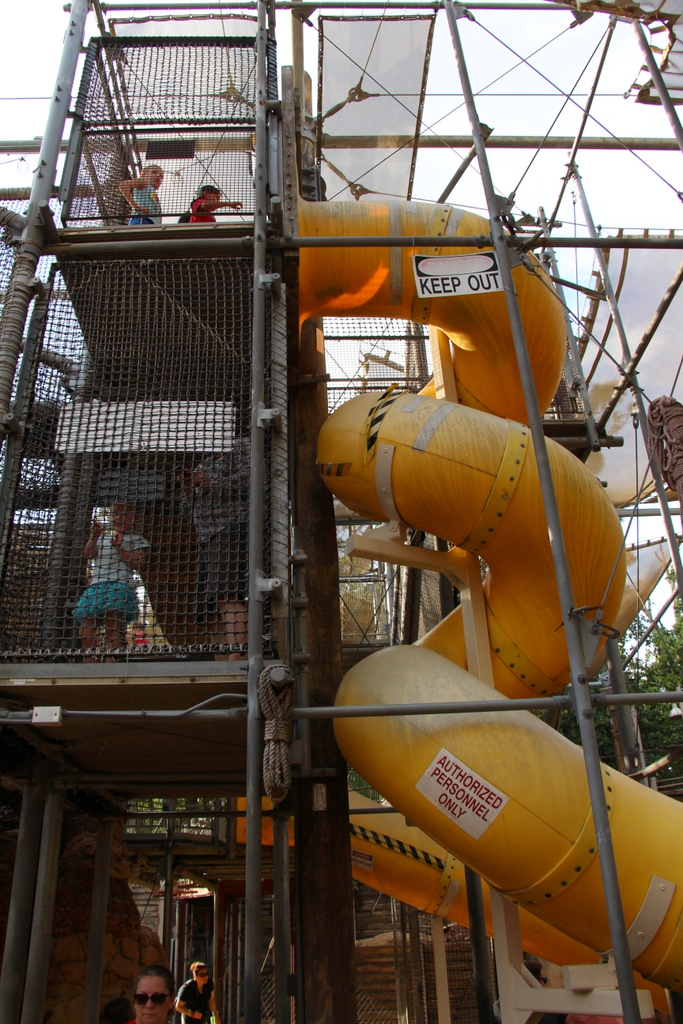 Do you see how far apart Michael and Elise chose to play? Probably 5 feet apart. 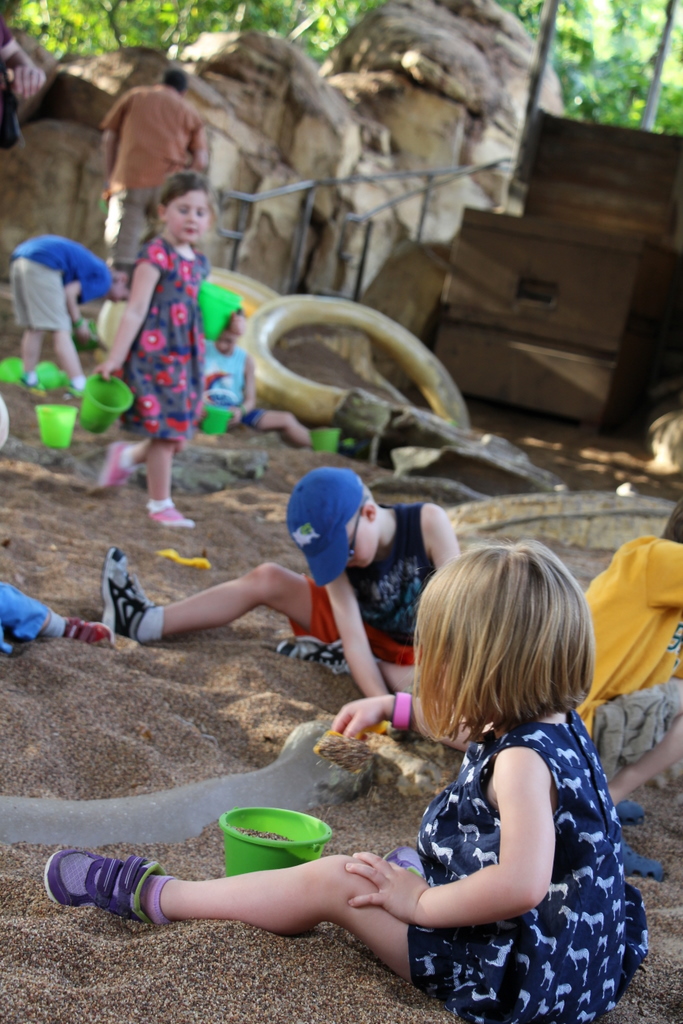 Patrick chose to be on the complete opposite side of the sandbox. On a normal day Patrick’s temper bubbles close to the surface.  On days when his brother is doing his best to stay in control,  and Elise was cranky and not feeling 100%, Patrick just needed to have time away from everyone else and spent some time alone. This sand box was perfect for that. 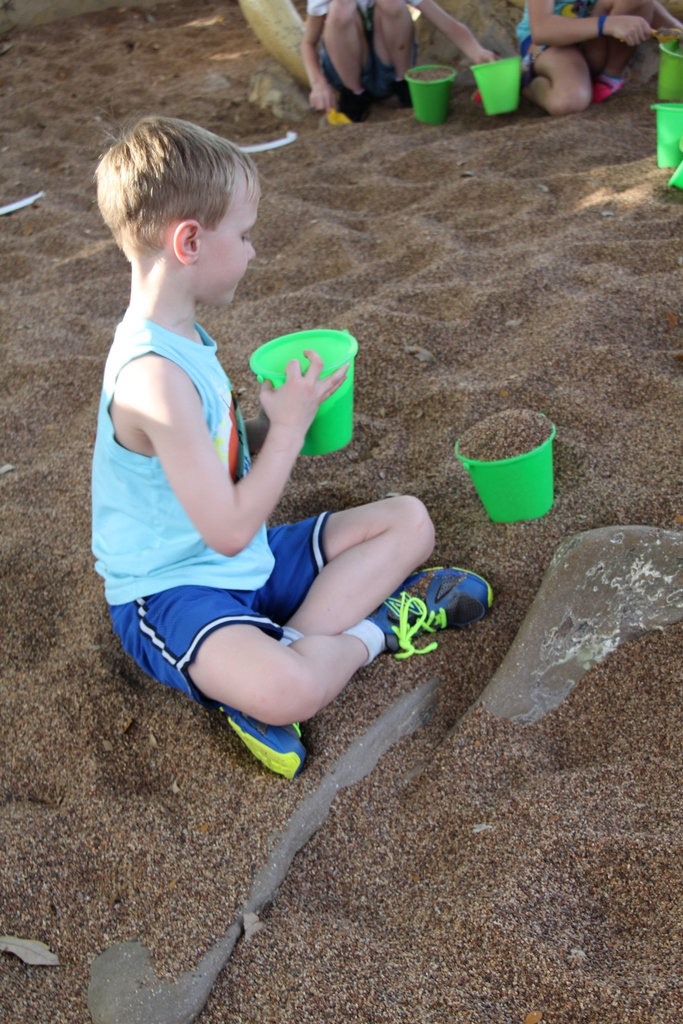 The day was great. We were definitely Disney Park novices. We walked ALL day and back tracked frequently. Tim and I almost became one of the many couples we saw fighting over where to go next and who was helping more. Disney is not a place of the faint of heart. You need to have a plan. We learned that the hard way. Even though Jess had scheduled us to eat at a certain time and ride a few rides at a certain times (You get 3 Fast Passes a day and she booked them for us) the in-between was chaos.

When packing for Disney I thought we should bring a stroller, Tim insisted that Elise could ride on his shoulders. We compromised. I wouldn’t pack a stroller but Elise would be his responsibility if she insisted on being carried. Well she wanted to be carried but refused to be carried on his shoulders. Tim spent the entire day carrying her on his hips. I never once said I told you so while we were in the park. I waited until we got back to the resort and the kids were in bed and Tim had been fed and was sufficiently hydrated again before I did that.

I was worried that Tim would look back on the trip and only remember this.

He was hot, tired, frustrated and overwhelmed. I let him relax that night and take advantage of the wi-fi and he checked out. I spent the night planning the next day. I made routes and had a solid plan. Magic Kingdom was our Everest and we were going to conquer it. But first we were going to go to Epcot and that would be easy, right?!

“Tapping into my inner Type A and planning our first day
at #MagicKingdom tomorrow !#shannonfamilyvacay #DisneyWorld”

There are so many more photos that you can find here. I haven’t even began to share all my favorites with you all.

The cat is now sequestered because she was hunting the contractors. The dog and I went for a long walk/trudge through the snow to help curb her anxiety and I am doing my best not to break out into a very embarrassing happy dance every time I see them chuck another hunk of water damaged drywall into the dumpster.

Life will be crazy for the next few weeks but after it is all said and done the basement and kitchen will be awesome.

A three-way snowball fight sounds like a good idea to them but every parent reading this knows it will end badly.

I choose to let them learn that lesson on their own.

The first one came inside victorious and ran through the house at lightning speed to get away from the other two. The victorious one, of course, tracked snow all the way through the main floor and spent the next half hour cleaning up sludgy snow off the hardwood floors (ironically he only ran across the section of the hardwood floor that didn’t get ruined by the flood).

The second kid threw a fit and exclaimed that the other two were breaking some unspoken rules that he thought were implied and that everyone should have followed. In an act of spite he locked the third kid out of the house (presumably to teach them a lesson?) and then went and tackled and hurt the first kid.

The third kid, who threw some pretty mean and vicious snow balls at the other’s faces (a serious infraction on a well know house rule – Don’t throw things at people’s faces!)  was locked out of the house and screaming in fear.

I could have told them to not have a snow fight but what is the fun in that?

In the end, all three had to apologize to me for breaking rules and to each other for hurting feelings, hurting faces and scaring the shit out of one another.

I am sure they will do this all again tomorrow.