June 9th was the kids’ last day of school. It was a much-anticipated day in the Shannon house. By the end of the school year I am out of steam. I forget to sign daily folders and planners. I can’t keep track of what special day it is for what kid, because the entire last month of school is one “Special Day” after another.

Game Day – Bring a board game

Picnic Day – eat lunch outside bring a towel to sit on

And it went on and on, and rarely did each kid have the same event on the same day.

Needless to say…. when it came time to take the last day of school photo, I was almost in tears. Tears of sweet relief! 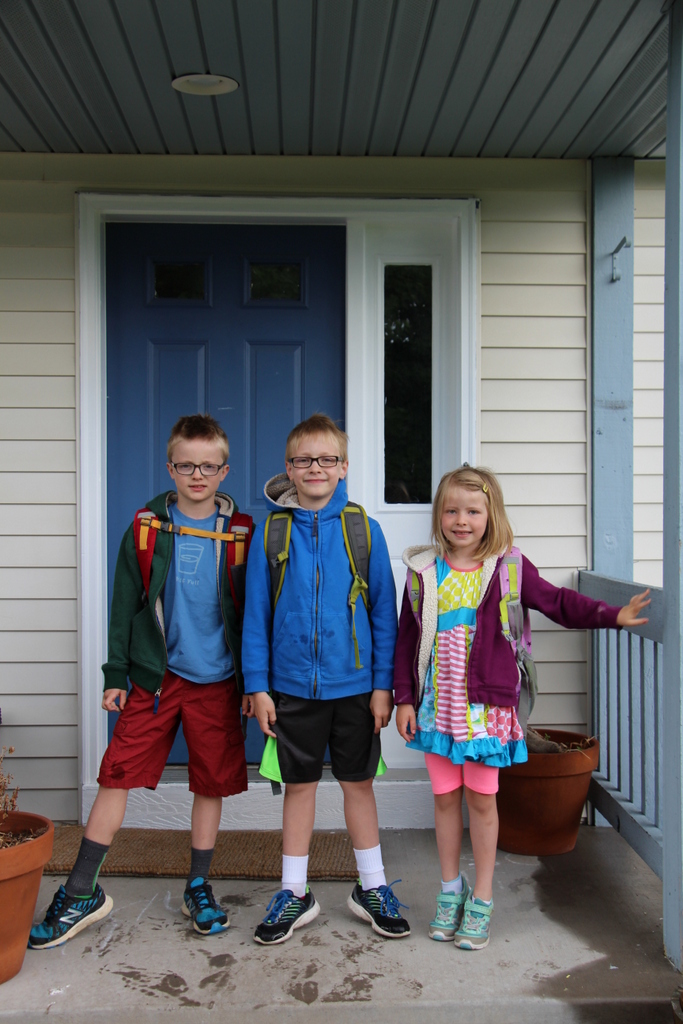 The kids have come so far. I would say that this year was the best year that both of the boys have had in school. They were blessed with wonderful teachers and even though there were some really tough times throughout the school year, the teachers we incredible and we felt supported as parents and we knew when we sent our kids to school, they were loved. It was a good year for all three kids, but the boys really hit the jackpot with teachers.

Michael finished 3rd grade on a positive note and is excited to be a 4th grader. When asked what he wants to be when he grown up he said, “I want to be a computer programmer like dad!’ 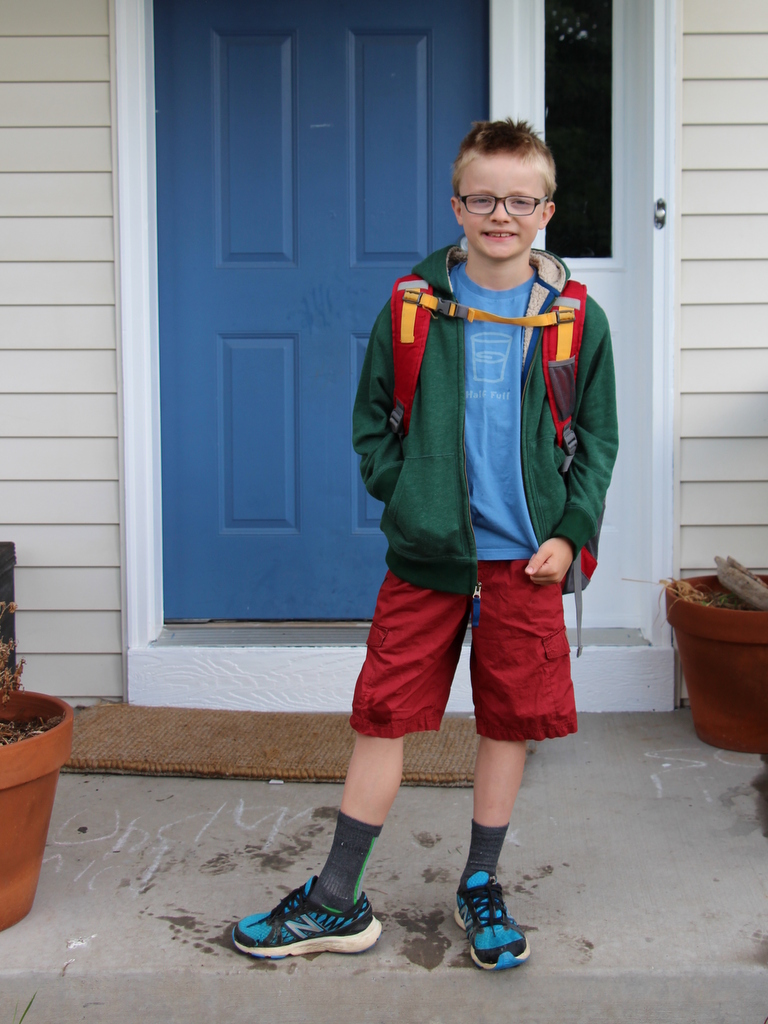 Patrick finished 2nd grade with really high grades in reading. He has become quite the reader. When asked what he wants to be when he grows up he said, “I want to be a Myth Buster but if that TV show is gone when I am a grown up, I want to be a science teacher.” 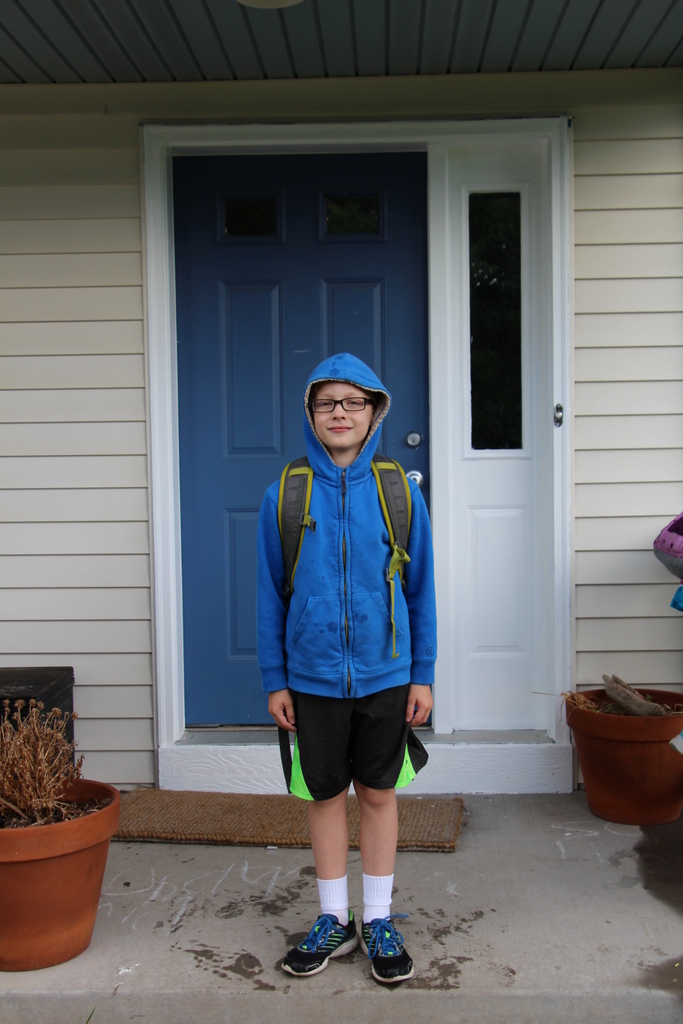 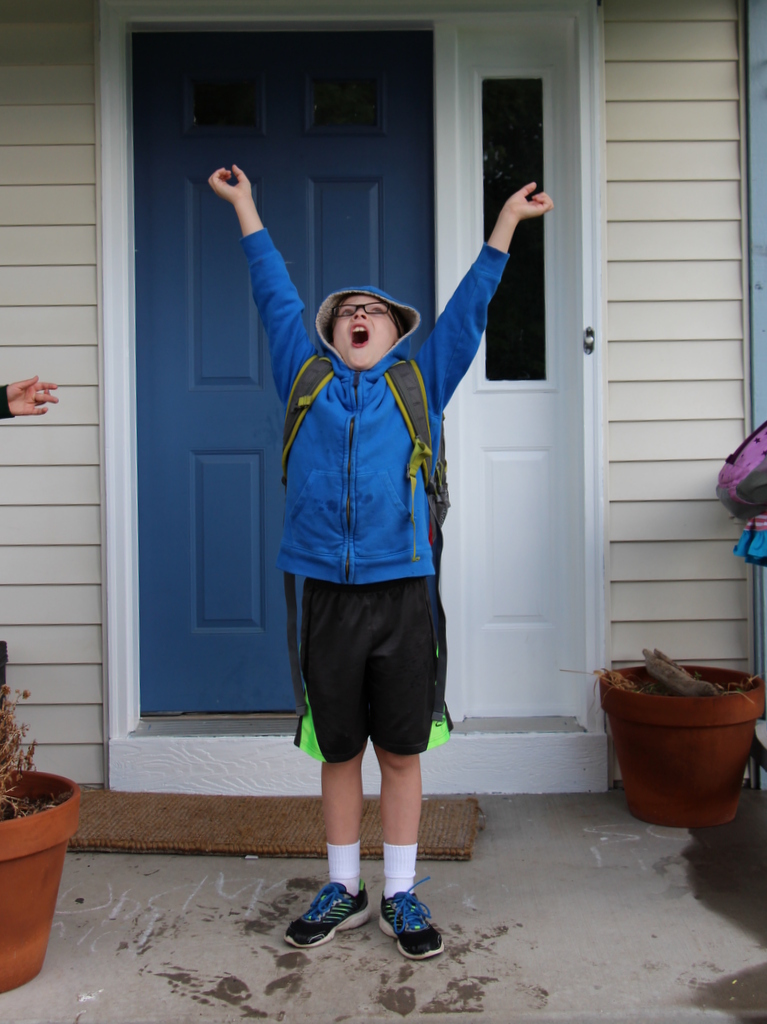 And Elise. We went to our very last Kindergarten Graduation. It was a bittersweet day to know we will never have a Kindergartner again. Elise, on the other hand, was stoked to move on to 1st grade. This girl isn’t really excelling in her academics. She is however, rocking at “Specials” which are what her school call Gym, Music and Art. She made it through Kindergarten and first grade will be a challenge but we have a whole summer of Mom and Elise reading time to help catch her up. When asked what she wants to be she said, “I want to be a Mom, and a Cowgirl and…. can I still be an Artist if I am a Mom and a Cowgirl too?” 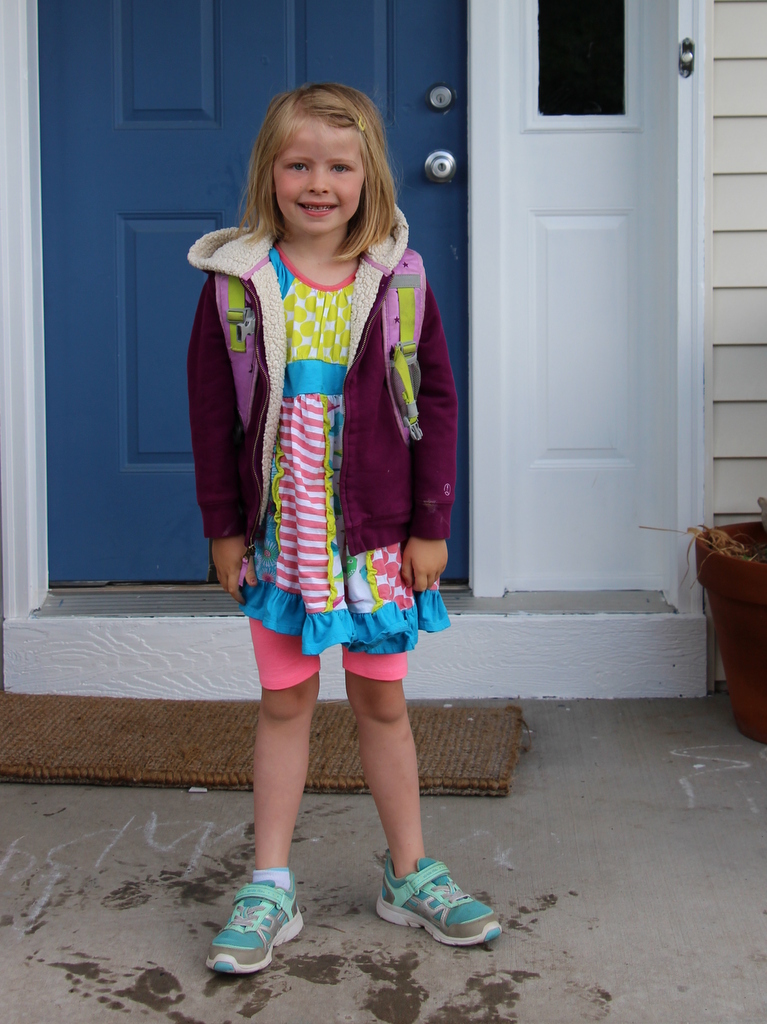 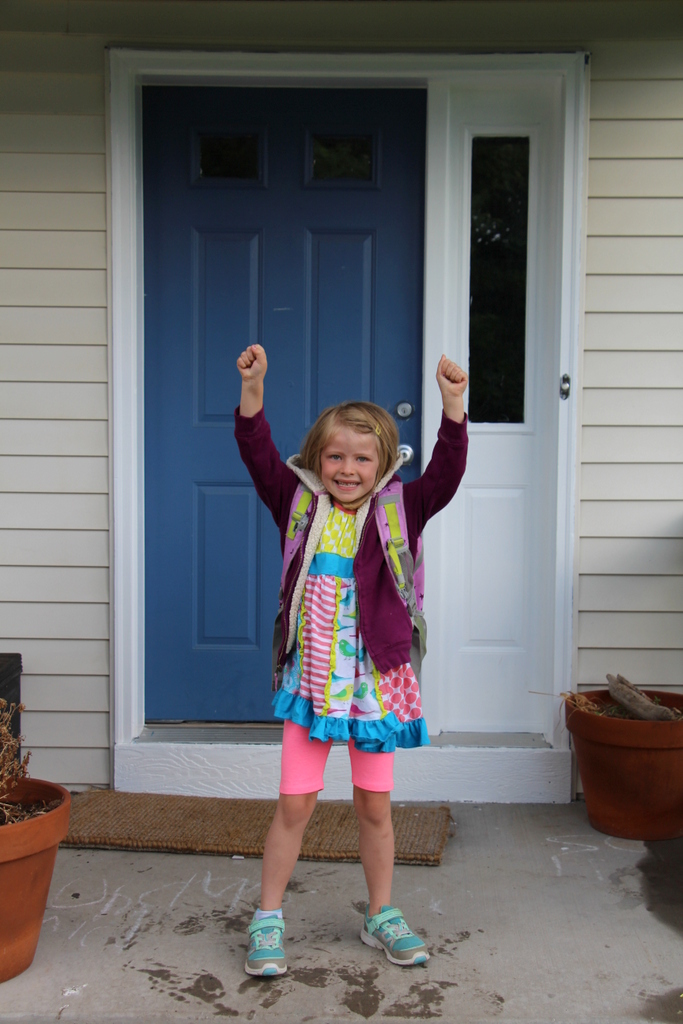 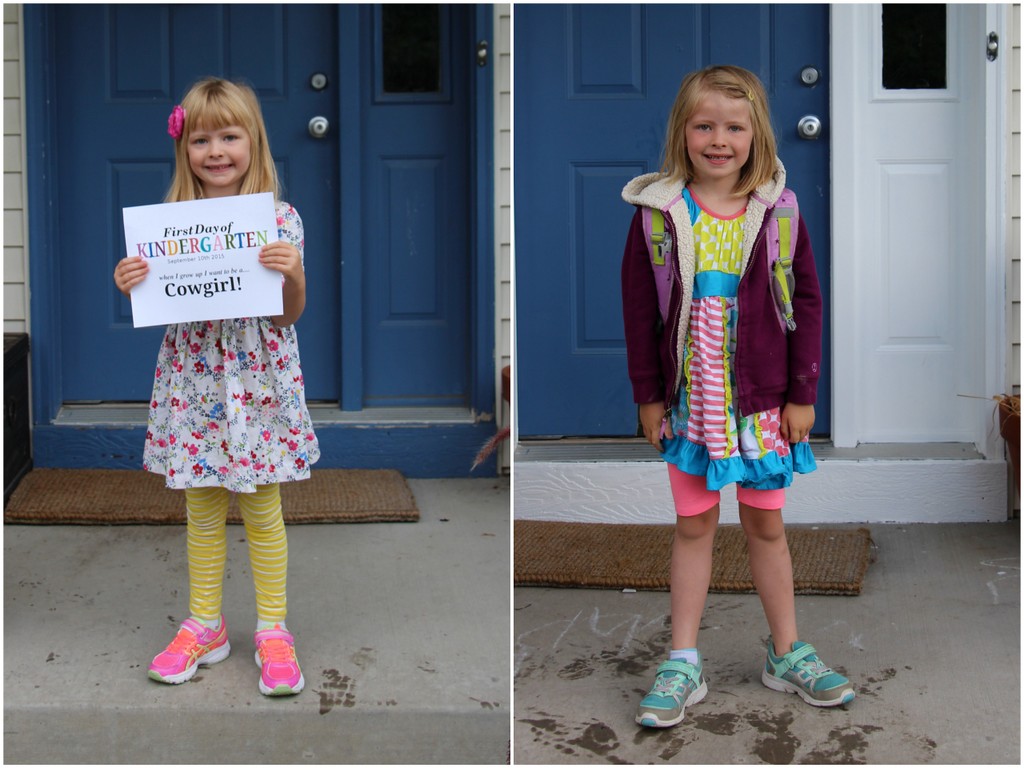 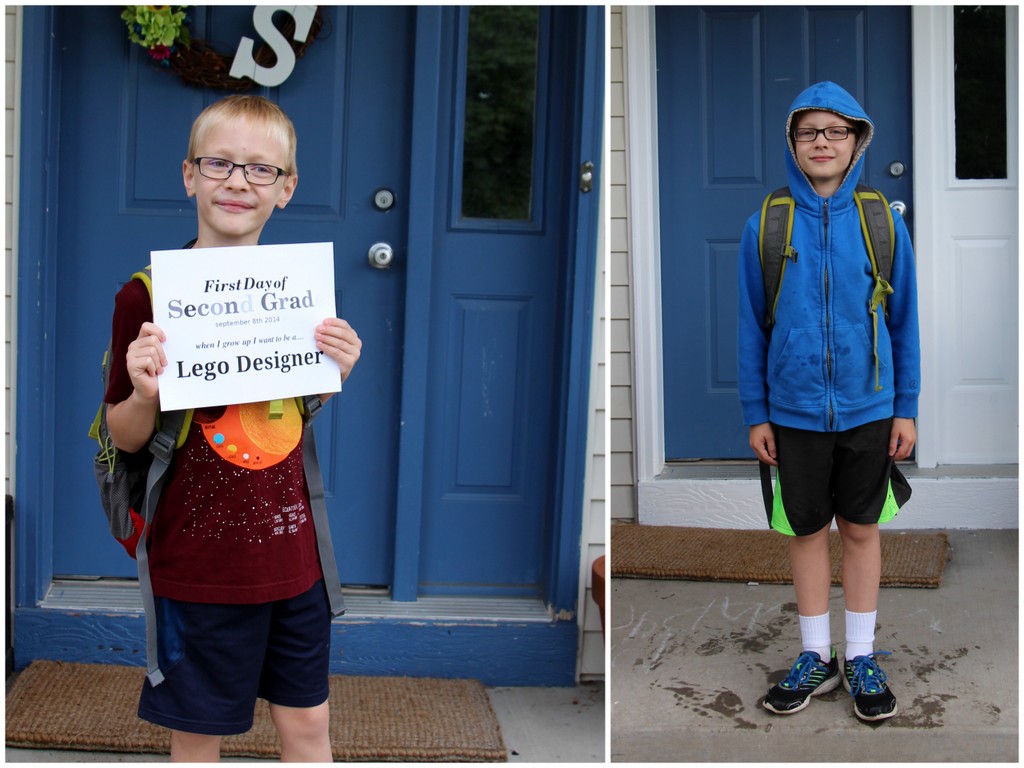 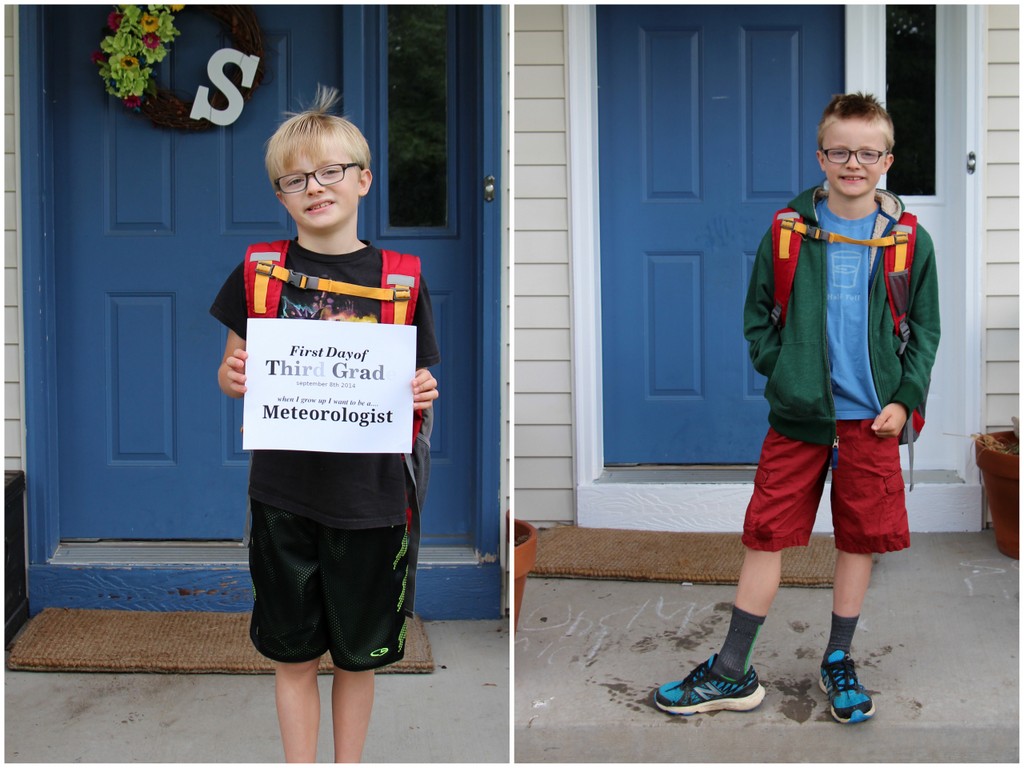 Elise got a bath this morning. This is not a normal thing. Normally, I make an attempt to brush out the snarls and then we negotiate the style in which I tie back her “growing out like Rapunzel” hair.

This negotiation usually starts with a ridiculous, unachevable request like, “Can you make my hair look like Elsa today?” or “Can I look like the cowgirl Barbie hair from that movie?” and then I talk her down to a more realistic option like, “One or two braids” or “maybe just a pony tail, like the horse on the Barbie movie… I know you can gallop like a horse! How about a PONY TAIL?!” Sometimes, if we have a little extra time, she gets a French braid like “Little Elsa”.

Some days I go rogue and do a surprise braid. Sometimes these rogue braids are met with excitement, “You are the BEST MOM EVER!” and some days I am greeted with a less than loving tantrum, “I DON”T LIKE THAT. I HATE MY HAIR LIKE THAT!!!!” For the record, tantrums are always louder and require more caps to express.

But this morning she needed a bath because she has been sick and her runny nose had inevitably been wiped with her hair somehow so the snot had knotted up the hair into a germ filled nest. The reason she didn’t get a bath last night was because they were at Mouse Choir at church and we didn’t get home until late. If you are thinking this through and have come to the realization that I sent my 5 year old to church with snot snarled hair, you are correct.

The reason why I cared this morning about the snot filled hair and not last night? It is Picture Day at school. The day where parents dress their kids up in the nicest school clothes they have, brush their kids hair, write a check for an obscene amount of money for an unseen product, drop off their kids at school and hope for the best.

In this day in age, where I feel like most parents can take an equally as nice photos that expresses their kids’ personalities better than a “Sit here on the stool while I change the textured red background to a textured grey background” photo, Picture Day seems a bit ridiculous. But it is a right of passage and I need 5x7s to send to Grandparents, so I fill out the form three separate times, write three separate checks, dress them up, brush their hair and drop them off.

Before I dropped them off this morning I asked them to take a quick photo on the door step. I told them to smile like they would for the school pictures and this is what I got.

I have complete confidence that Picture Day photos will be flawless.

*if you look closely in the reflection of the door, you can see me wearing Elise in a sling and PJ standing next to me.

And somewhere between Michael’s First and Elise’s Last day of preschool Patrick had 2 First and Last Days. 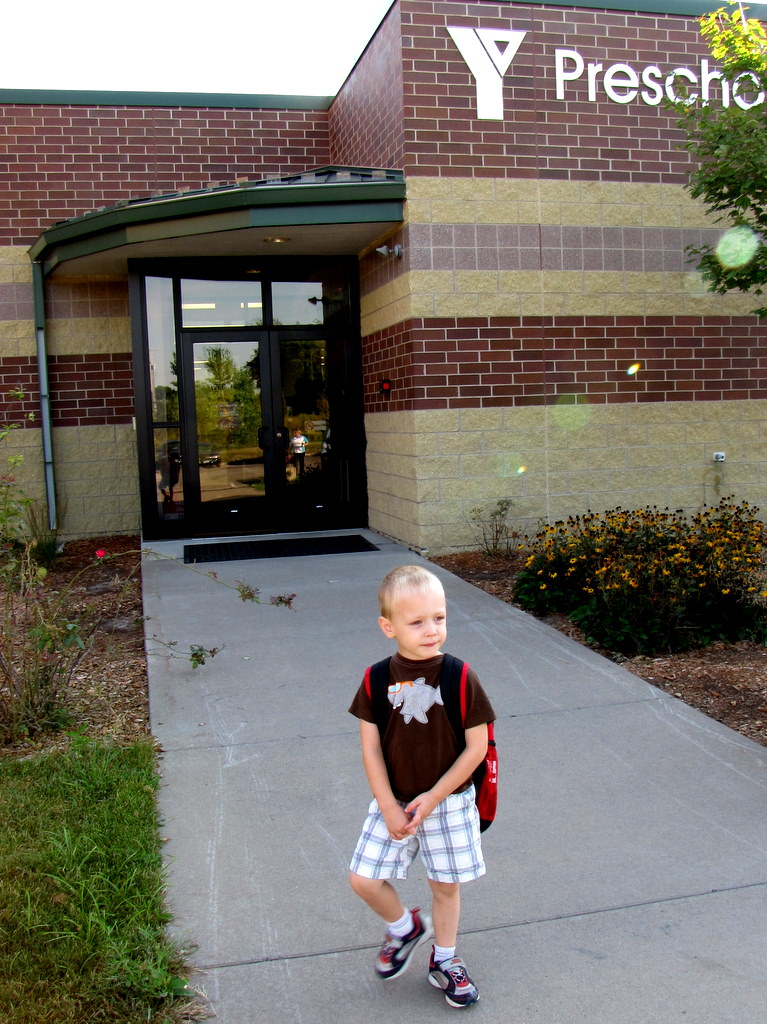 We have gone to 20 teacher conferences, 10 Holiday programs, 10 graduations, 5 First Days of School and 5 last days of school.

It was the essence of bittersweet handing in my ID card knowing that this fall I would not be using it again. All three kids (and just to be clear three is all we will have, three is the limit) have graduated preschool. I will have 3 school age kids next year!

Here are a few photos of Elise on her last day of Preschool. I threw out the teacher handout before reading that said the last day of school was Super Hero day. So while all the rest of Elise’s classmates were in Super Hero t-shirts, masks and even Halloween costumes, my kid showed up in the dress she chose herself and the tiara she insisted on accessorizing with. 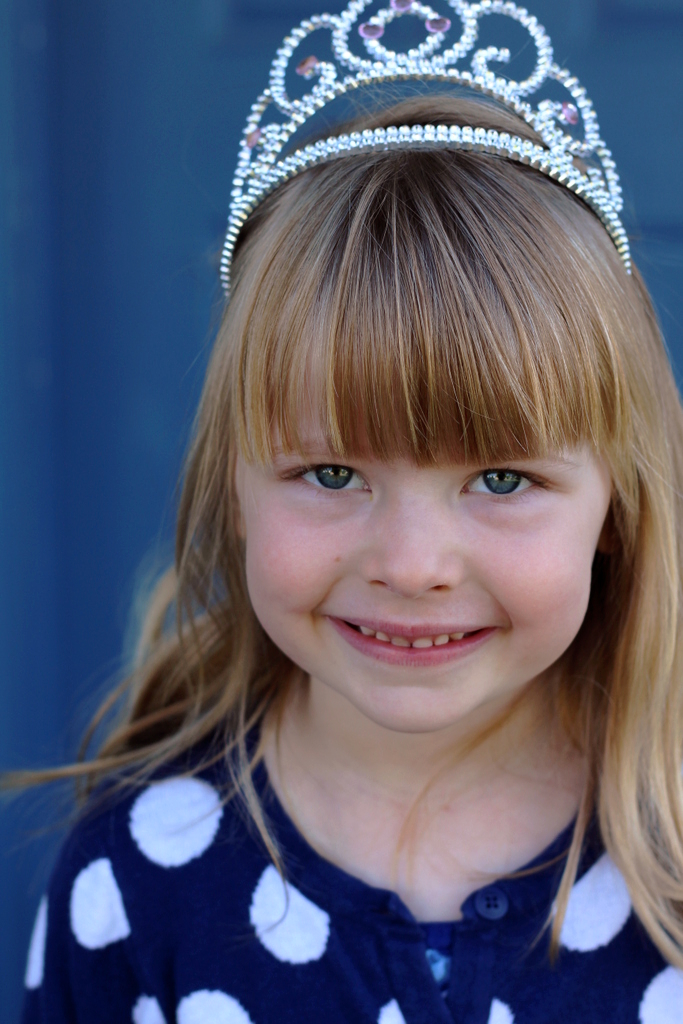 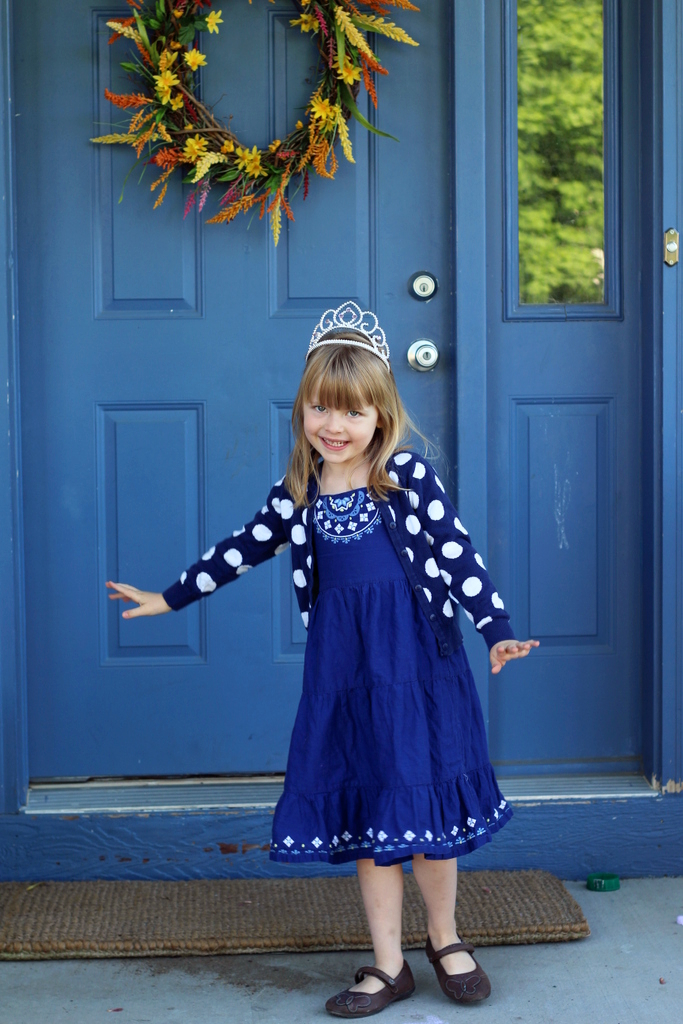 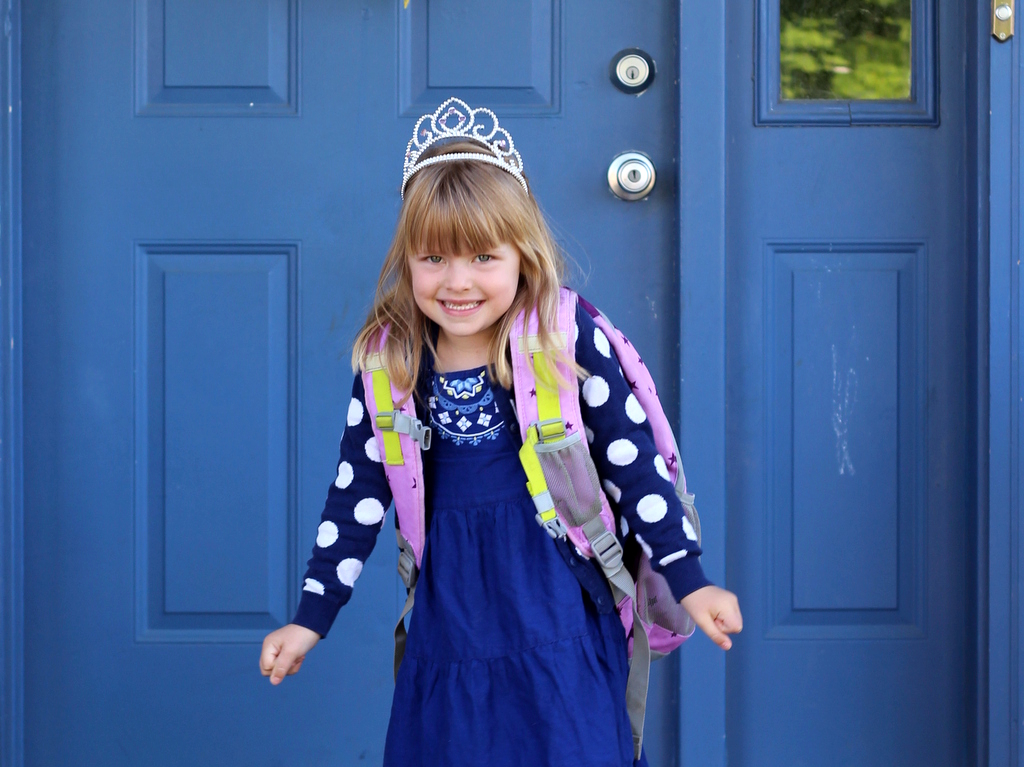 It has been a wild, fun and exhausting ride. I think our van could drive to the Y Preschool on auto-pilot at this point.

I am so proud of Elise. She is ready for Kindergarten in the exact opposite way the boys were ready. The boys hated writing, coloring and cutting and Elise is a pro, and colors and cuts all day long. In fact TIm bought a new toner printer last year because I was printing out so many “Coloring Pages” off the internet that regular printer ink became more expensive than just buying a toner printer! The kid colors all day and she is good.

The boys went into Kindergarten knowing all their letters, shapes, number and colors. Elise… not so much. She struggles with letter and number recognition. I know she will get the eventually but she definitely has some catching up to do in this area.

The area that she is most different from the boys is maturity levels and social and classroom skills. Maybe it is a girl vs. boy thing or maybe it is just Elise vs her brothers thing but she couldn’t be more ready to be in a kindergarten classroom. She wants to learn. She is good at following directions and she is great socially with her peers.

I am going to do my best to savor this summer with her before she starts full-time school. Because we are so alike she is quick to get on my nerves but it seems like once you send your kiddos off to Kindergarten everything warps into light speed. For example…. Michael is turning 9 years old this summer and starting 3rd grade next fall… when did that happen?!

Wasn’t I just writing a blog post about Michael’s First Day of Preschool?

More photos of Elise on her last day here.

Keeping with tradition we hit up the bookstore, went out to eat and had icecream for dessert. 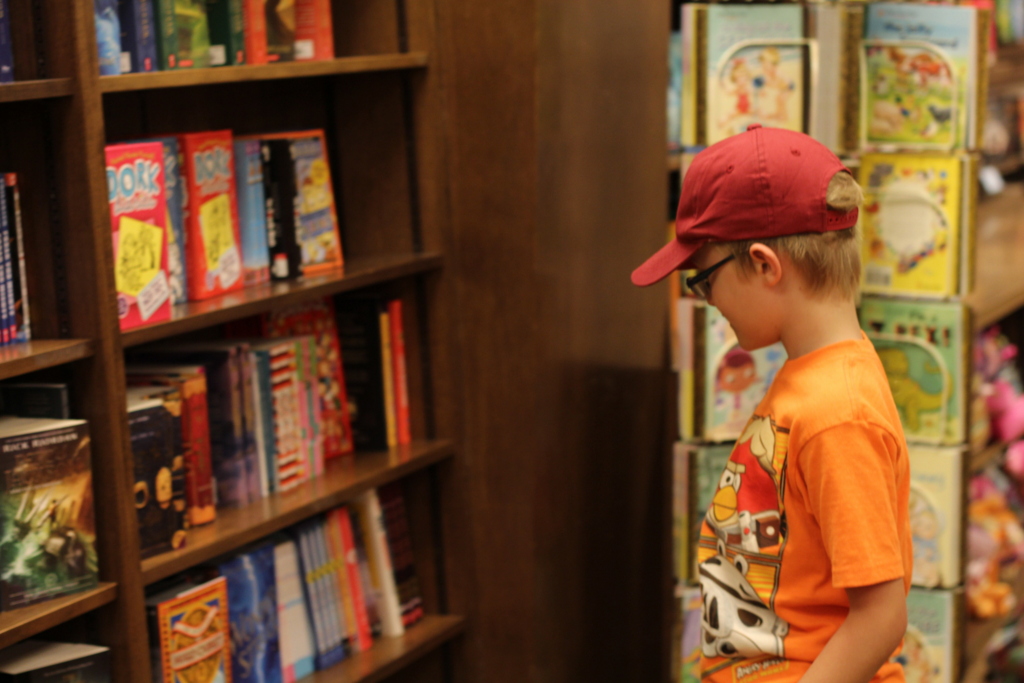 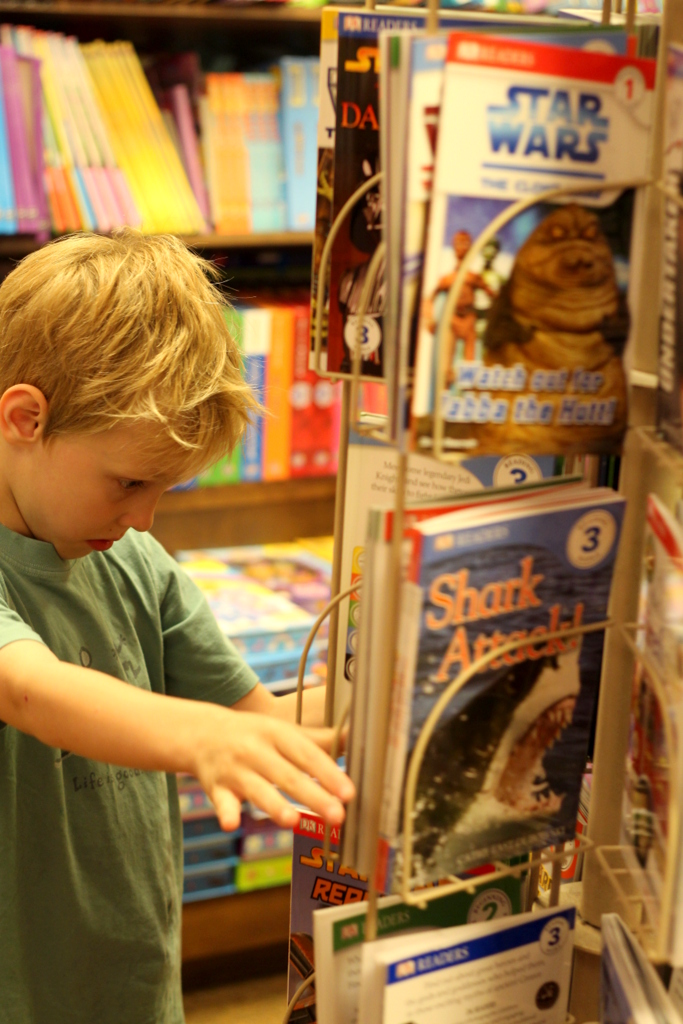 Patrick was in search of his present favorite early readers, Fly Guy. 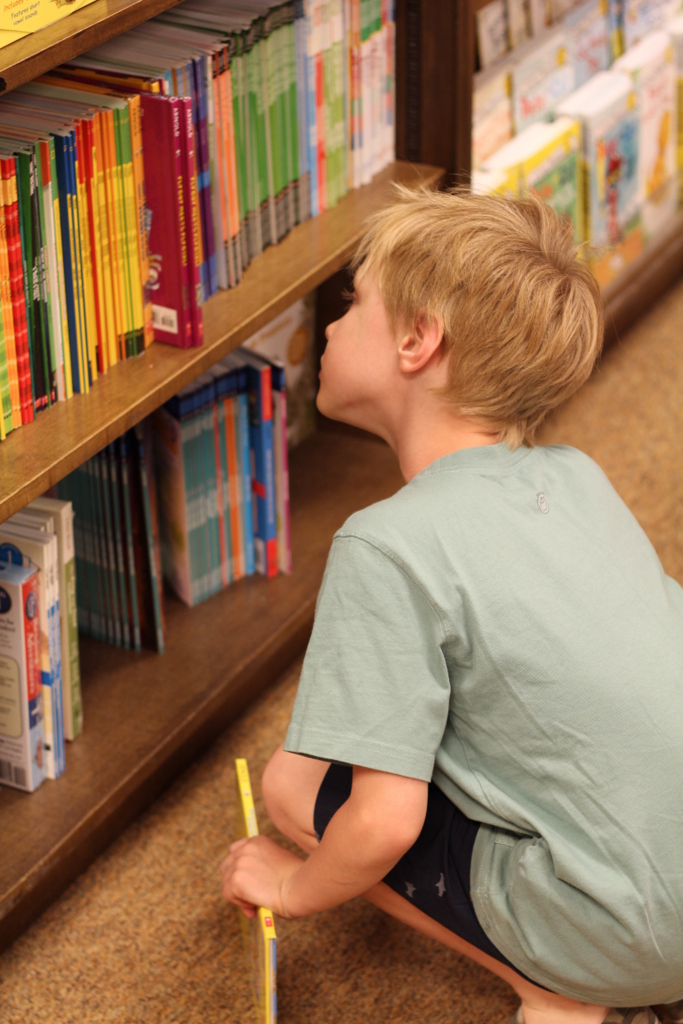 He was also super excited about this human body book because the last two weeks of school his class lessons focussed on the body. 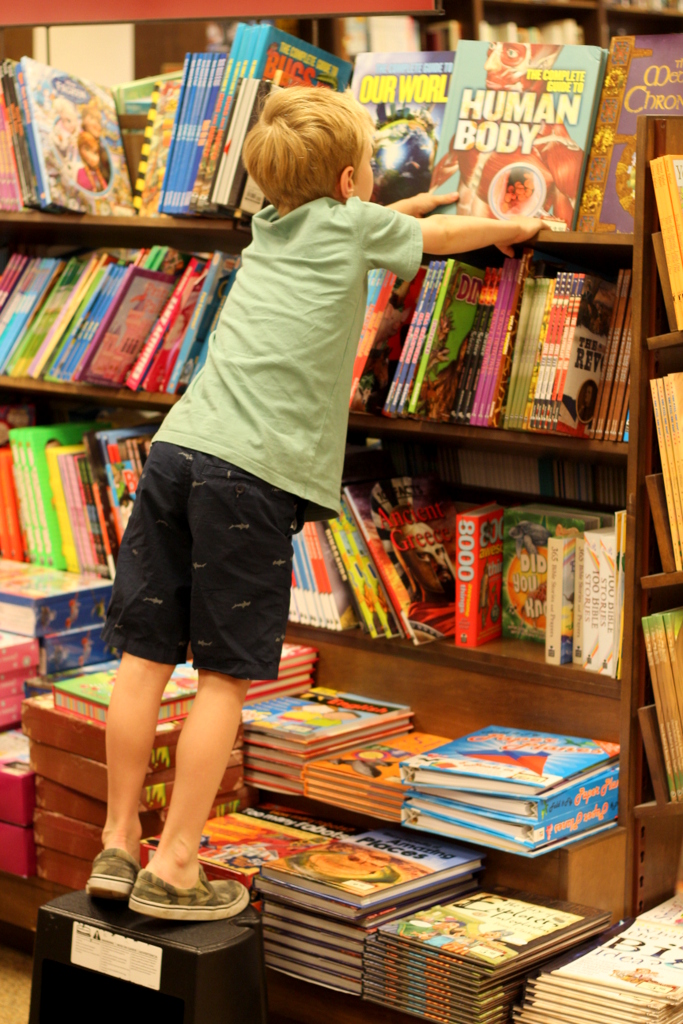 Michael wanted a wordy and intense chapter book on Skylanders and I challenged him that if he could read some of it then we would buy it for him. I never thought he would be able to do it… Three paragraphs into reading I told him to put the book in the basket. He read every word. I even called Tim over from where Elise was schooling him on the different ponies in My Little Pony and Tim beamed from ear to ear while he listened to Michael read about the different elements in Skylanders. We are so proud of our little readers. 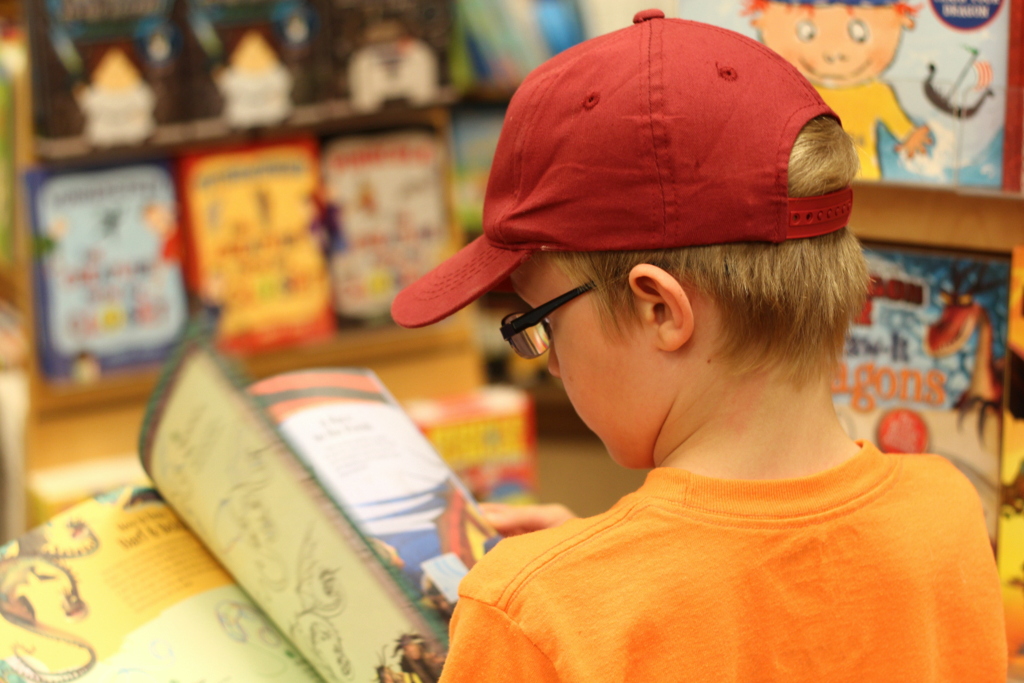 He also needed an easy reader book about tornadoes. 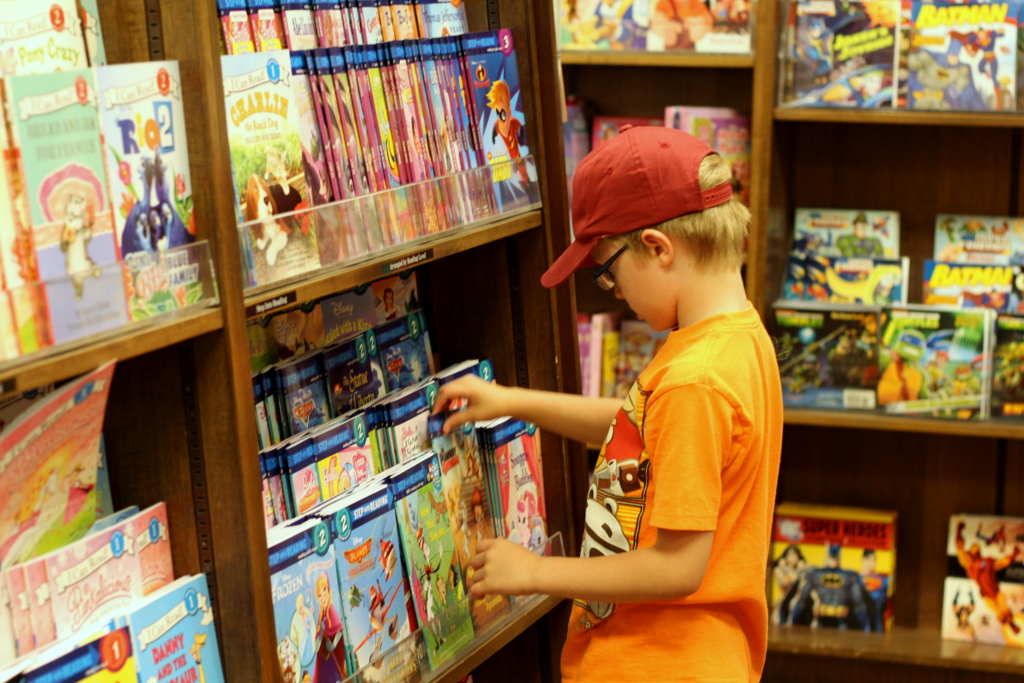 We bought a few more books than we intended but when it comes to saying no to books, both Tim and I are pretty weak. A new plastic toy from the Target Toy isle? No. A new book? Yeah, we probably going to say yes to that.

More photos in the gallery.